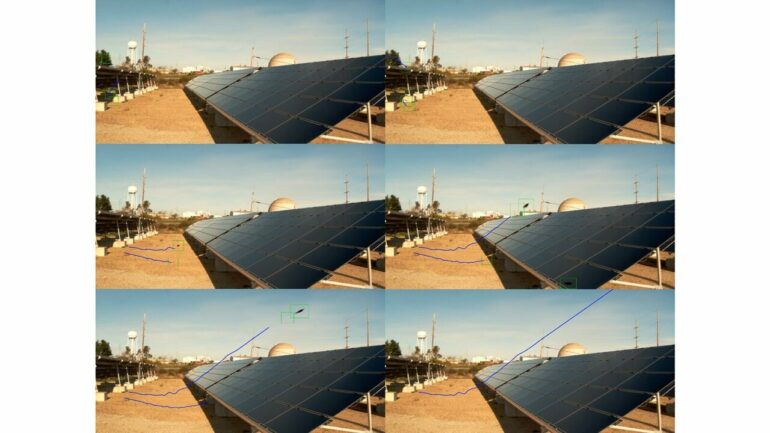 Near-real-time data on avian-solar interactions will help the energy industry understand risks and opportunities for wildlife at solar energy plants.

How does an array of solar panels change a habitat? The question is complex—and increasingly important, as solar energy plants proliferate across the United States. The industry and researchers, however, currently don’t have a lot of answers. Researchers at the Department of Energy’s (DOE) Argonne National Laboratory are developing technology that can help.

Just like in any outdoor setting where wildlife is present, lots of bird activity happens at solar facilities that humans miss. Birds feed, they mate, they nest, and unfortunately, they die. What role the panels and equipment play in these activities is often a mystery. Human monitoring at solar sites is limited, and it can only reveal so much.

“Real-time avian-solar interactions are a black hole in terms of data,” said Misti Sporer, environmental development director for the utility company, Duke Energy, which operates more than 65 solar plants in the U.S. “We don’t have a full picture of how birds use these sites, because the minute you put someone on the ground, the birds fly off or they do something in reaction to the human surveyor.”

A three-year project aims to let advanced cameras and artificial intelligence do the work of monitoring bird activity at solar facilities. Since spring 2020, Argonne researchers have been collecting video at solar energy sites, including one operated by Duke, and training computer algorithms to recognize birds in the scenes. The system is also learning to classify specific types of activities, including collisions with panels.

Federal and state laws protect many species of birds and examining environmental impact is part of compliance with those laws. Solar developers and operators often must conduct preconstruction habitat assessments and postconstruction fatality monitoring as part of the environmental review requirements for a project. Argonne’s technology could help with that task.

A solar energy worker might find a carcass on the ground near some panels, for example, but how the bird died is often unclear. One review of fatality monitoring studies at solar sites found the cause of death could not be determined in more than half the cases. Another study published in 2022 found that bird fatality rates at solar projects were often underestimated because of “low or insufficient monitoring duration.”

By collecting a large amount of near-real-time data that would include any collisions, Argonne’s monitoring system could fill critical data gaps to help understand the cause and magnitude of bird fatalities.

On the other hand, solar facilities may foster beneficial bird behaviors, and understanding more about those behaviors could lead to facility designs and practices that are bird friendly. Factors could include the facility location, the type and placement of equipment, and what vegetation is growing nearby. The technology could also help illuminate what types of bird are present in the area before and after a project is built.

“We’re actually seeing birds use the habitat for seed foraging, for what appears to be nesting behavior, and what appears to be inter- and intraspecies interaction,” said Sporer of the data coming from Argonne’s system at a Duke Energy site in Arizona. “So, I’m surprised at the amount of bird use on the site in terms of birds just being birds—no negative interactions.”

The Argonne technology is currently in the early stages, and much progress has been made. “A big focus has been on collecting lots of video that we can annotate and use to train our models,” said Adam Szymanski, an Argonne software engineer and technical lead on the project. “We have also built and trained a lot of the machine learning algorithms needed to identify birds in the landscape and classify activity. We’ve achieved pretty high accuracy on both those fronts.”

In the current phase of the project, Hamada, Szymanski and the team are continuing to refine their model and demonstrate a working prototype system by spring 2023.

Amanda Klehr, a project biologist with the consulting firm DNV Energy U.S. Inc., noted that there are many open questions related to bird activity and bird deaths at solar sites, particularly in terms of which phenomena might be regional and which might be widespread. The “lake effect,” for example, where migrating birds mistake solar panels for bodies of water and collide with them, is one theory being explored, particularly with regard to the U.S. Southwest.

“The main thing that solar developers ask is, what do we need to do as far as preconstruction surveys to understand whether or not there are potential risks to birds that might affect us in our region,” she said. She added that the Argonne monitoring system would be useful in her own master’s degree research at the University of Massachusetts in Amherst, which is focused on how birds use solar sites in the Northeastern U.S. during the breeding season.

The Avian Solar Work Group, a collaboration among environmental groups, academics, and the solar industry, is exploring a variety of research topics. The Argonne avian solar monitoring technology is gaining interest as a tool not only for research but also siting and operations. The ability to collect more data with less time roaming facilities for humans would benefit the industry on the permitting and compliance front.

In Apps and WebSmartphones
on 4 May 20211 min read

“Postconstruction mortality monitoring tends to be time-intensive, labor intensive and expensive,” said Sporer. While it’s still early to say for sure, she said, with remote monitoring “we think we would have fewer man hours and actually be able to observe the interaction itself, rather than the suspected result.”

Klehr noted that agencies such as the U.S. Fish and Wildlife Service and state environmental departments, which are charged with preserving resources around a solar site, also play a role in determining how research and monitoring happen.

“As a consultant working with operators, we generally try to coordinate with agencies,” she said. “On the wind energy side, there is more of a focus on incorporating technology into monitoring. That’s a potential for solar energy as well, and agencies are seeing that in a more positive light.”

“Technology can be great but solving problems with technology requires that people actually use it,” Hamada said. “We look forward to validating this system further in the field.”

After the prototype is complete in 2023, the next step will be to deploy Argonne’s system at more solar sites with industry partners.