Referrals are pivotal to solar adoption in underserved California communities 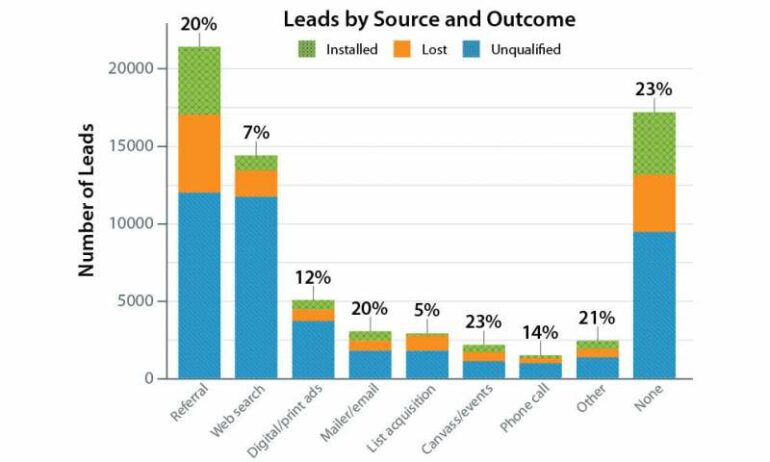 Solar leads and installations in disadvantaged communities do not come from phone calls or emails from solar companies but instead from referrals by friends nearby, finds new research by the National Renewable Energy Laboratory (NREL) on California income-qualified solar programs.

On the opposite end, program disqualification due to intricate eligibility requirements is the biggest source of lost or uninterested prospective solar adopters in the California programs.

This research is part of the multiyear Solar Energy Evolution and Diffusion Studies funded by the U.S. Department of Energy (DOE) Solar Energy Technologies Office. In this study, NREL used California data and predictive models to determine the likelihood of solar referral and adoption among low- to moderate-income households—generally defined as a family of four making less than 80% of the median family income for their area. The findings, published in Energy Research & Social Science, can help to identify successful solar uptake strategies for communities that have been left out of the industry to date.

Some communities face more barriers to installing rooftop solar systems than others, including cash constraints, not owning their homes, and language barriers. For these reasons and more, solar adoption in the United States is concentrated in middle- and upper-income households.

As more high-income households adopt solar, retail electricity prices could increase and make it harder for households who put a larger share of their income toward their energy bills, also known as energy burden. However, there is technical potential for hundreds of gigawatts of solar on U.S. households that face higher energy burden—equivalent to offsetting 84% of annual electricity consumption.

“It’s important for all households to have access to rooftop solar,” said Ben Sigrin, NREL senior energy modeler and principal investigator of the study. “If we can expand solar adoption to low- to moderate-income families, we can reduce energy burden, create more equitable access to renewable energy, and increase decarbonization.”

In addition to his NREL work, Sigrin is currently a fellow with DOE supporting the Justice40 Initiative—a plan to deliver 40% of the overall benefits of climate investments to disadvantaged communities, as well as to inform equitable research, development, and deployment.

In this latest phase of the Solar Energy Evolution and Diffusion Studies, NREL looked to the California state government to better understand solar adoption in disadvantaged communities. California runs the most solar programs directed to these communities in the United States, with nearly 80,000 leads and 11,000 installations on income-qualified households.

For this research, NREL partnered with GRID Alternatives, which has administered California’s state-wide solar programs for over a decade, where income-qualified families in California can get a solar system at no cost. Despite the subsidies, GRID Alternatives spends about $1,200 per install on customer acquisition.

NREL then created two models that were trained to make decisions based on the California data: one to predict if a prospective solar adopter becomes “lost” or uninterested, and another to predict whether a solar adopter decides to refer solar to their network. Important insights emerged.

Referrals are pivotal to participation

As modeled, referrals are the single largest source of prospective solar adopters in the California underserved communities and one of the most effective mechanisms for converting interested adopters into installations. In addition, the closer the referrer, the more likely the prospective adopter will install and refer solar to their own network.

eBay Plus Weekend 2021: all the best deals from the sale still available

In Apps and WebCompaniesGamingRoboticsSmartphones
on 1 June 202121 min read

The biggest source of lost or uninterested prospective solar adopters is program disqualification due to stringent income, geographic, and home ownership eligibility requirements.

Based on the results, those who design state solar programs could 1) include referral mechanisms, saving staff time and resources to acquire and convert prospective solar adopters, and 2) loosen qualification requirements to extend solar to more households.

“Many lessons can be learned from the California data,” Sigrin said. “More flexible eligibility requirements and referral mechanisms within programs could help increase solar adoption in more communities across the country and reduce administrative burden for solar program staff.”