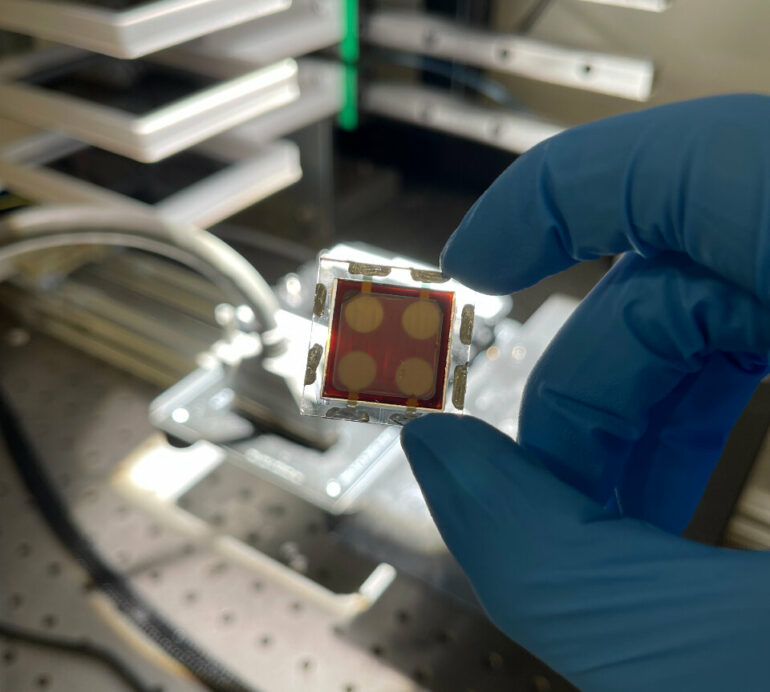 A new pathway to creating durable, efficient perovskite photovoltaics at industrial scale has been demonstrated through the first effective use of lead acetate as a precursor in making formamidinium-cesium perovskite solar cells.

Members of Exciton Science, based at Monash University, were able to create perovskite solar cells with 21% efficiency, the best results ever recorded for a device made from a non-halide lead source.

A mini prototype solar panel featuring these cells achieved 18.8% efficiency. The large-area perovskite layer was fabricated in an ambient atmosphere and was made via a single-step blade coating, demonstrating its potential viability for industrial-scale manufacturing.

The test devices also showed strong thermal stability, continuing to function with no efficiency loss after 3,300 hours running at 65°C.

First author Jie Zhao, a Ph.D. student at Monash University, said, “We’ve been able to use lead acetate in a one-step, spin-coating process to get the perfect, high-quality formamidinium-cesium perovskite thin film.

“And because we don’t need an anti-solvent agent, we can do this via large-scale techniques, such as blade coating, which means it’s viable at industrial scale.”

The results have been published in the journal Energy & Environmental Science.

More about perovskites: Promise versus problems

Thin film solar cells made from perovskites have the potential to disrupt the solar energy sector, thanks to their relatively low manufacturing cost, flexibility and tunable band gap relative to silicon. However, researchers are struggling to solve reliability issues, and they also need to find a way to create devices at a viable commercial scale.

Perovskites are solution processed (made in liquid) using a variety of different ingredients. Most approaches use lead halides and require the inclusion of strong polar solvents with high boiling points and antisolvent quenching agents to control the perovskite crystallization process. This complicated mechanism can lead to defects in the thin films, which causes the resulting device to rapidly lose efficiency. It’s also hard to control.

The chemical compound lead acetate has emerged as a promising alternative precursor, because it can create ultrasmooth thin films with fewer defects. Until now, lead acetate had only been used to make methylammonium or cesium-based perovskites, which are relatively unstable and not suitable for real-world applications.

A better candidate for commercial use can be found in perovskites made using formamidinium and cesium, thanks to their superior stability. Previous attempts to synthesize them using lead acetate as the precursor failed. To investigate and solve this issue, the researchers, together with their collaborators at Wuhan University of Technology in China, examined the underlying molecular mechanisms.

New type of solar cell is being tested in space

Through X-ray diffraction and nuclear magnetic resonance spectroscopy, they identified the need to use ammonium as a volatile cation (positively charged ion) at a critical stage.

Contributing author Dr. Sebastian Fürer said, “The presence of ammonium served to drive away the residual acetate during annealing, without forming unwanted side products.”

The researchers hope their work on the fundamental chemistry governing precursor behavior can encourage a greater focus on scalable synthesis and fabrication methods of metal halide perovskite devices.

Provided by
ARC Centre of Excellence in Exciton Science