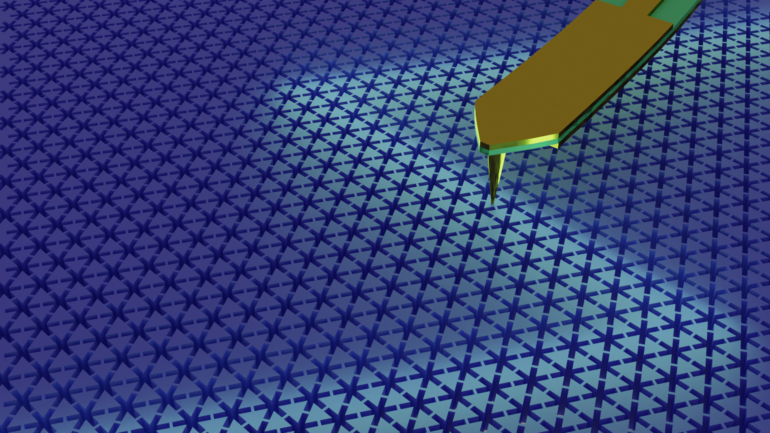 New research published in Nature Electronics describes topological control capabilities in an integrated acoustic-electronic system at technologically relevant frequencies. This work paves the way for additional research on topological properties in devices that use high-frequency sound waves, with potential applications including 5G communications and quantum information processing. The study was led by Qicheng (Scott) Zhang, a postdoc in the lab of Charlie Johnson, in collaboration with the group of Bo Zhen and colleagues from Beijing University of Posts and Telecommunications and the University of Texas at Austin.

This research builds on concepts from the field of topological materials, a theoretical framework developed by Penn’s Charlie Kane and Eugene Mele. One example of this type of material is a topological insulator, which acts as an electrical insulator on the inside but has a surface that conducts electricity. Topological phenomena are hypothesized to occur in a wide range of materials, including those that use light or sound waves instead of electricity.

To study this complex system, the researchers combined state-of-the-art methodologies and expertise across theory, simulation, nanofabrication, and experimental measurements. First, researchers in the Zhen lab, who have expertise in studying topological properties in light waves, conducted simulations to determine the best types of devices to fabricate. Then, based on the results of the simulations and using high-precision tools at Penn’s Singh Center for Nanotechnology, the researchers etched nanoscale circuits onto aluminum nitride membranes. These devices were then shipped to the lab of Keji Lai at UT Austin for microwave impedance microscopy, a method that captures high-resolution images of the acoustic waves at incredibly small scales. Lai’s approach uses a commercial atomic force microscope with modifications and additional electronics developed by his lab.

“Before this, if people want to see what’s going on in these materials, they usually need to go to a national lab and use X-rays,” Lai says. “It’s very tedious, time consuming, and expensive. But in my lab, it’s just a tabletop setup, and we measure a sample in about 10 minutes, and the sensitivity and resolution are better than before.”

The key finding of this work is the experimental evidence showing that topological phenomena do in fact occur at higher frequency ranges. “This work brings the concept of topology to gigahertz acoustic waves,” says Zhang. “We demonstrated that we can have this interesting physics at a useful range, and now we can build up the platform for more interesting research to come.”

Another important result is that these properties can be built into the atomic structure of the device so that different areas of the material can propagate signals in unique ways, results that were predicted by theorists but were “amazing” to see experimentally, says Johnson. “That also has its own important implications: When you’re conveying a wave along a sharp trail in ordinary systems that don’t have these topological effect, at every sharp turn you’re going to lose something, like power, but in this system you don’t,” he says.

Overall, the researchers say that this work provides a critical starting point for progress in both fundamental physics research as well as for developing new devices and technologies. In the near term, the researchers are interested in modifying their device to make it more user-friendly and improving its performance at higher frequencies, including frequencies that are used for applications such as quantum information processing.

“In terms of technological implications, this is something that could make its way into the toolbox for 5G or beyond,” says Johnson. “The basic technology we’re working on is already in your phone, so the question with topological vibrations is whether we can come up with a way to do something useful at these higher frequency ranges that are characteristic of 5G.”