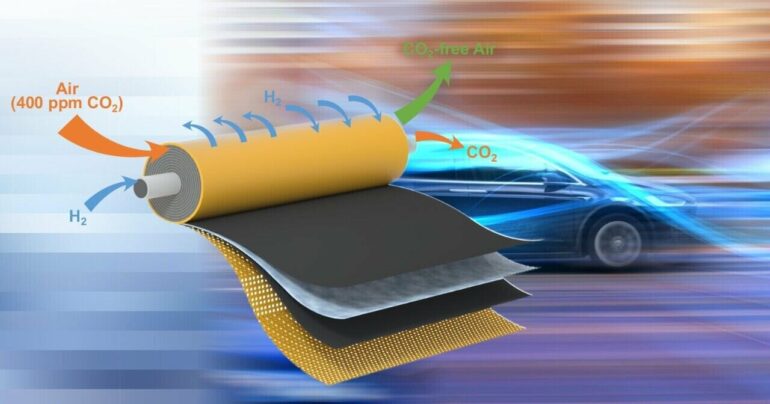 University of Delaware (UD) engineers have demonstrated a way to effectively capture 99% of carbon dioxide from air using a novel electrochemical system powered by hydrogen.

It is a significant advance for carbon dioxide capture and could bring more environmentally friendly fuel cells closer to market.

Fuel cells work by converting fuel chemical energy directly into electricity. They can be used in transportation for things like hybrid or zero-emission vehicles.

This defect quickly reduces the fuel cell’s performance and efficiency by up to 20%, rendering the fuel cell no better than a gasoline engine. Yan’s research group has been searching for a workaround for this carbon dioxide conundrum for over 15 years.

A few years back, the researchers realized this disadvantage might actually be a solution—for carbon dioxide removal.

“Once we dug into the mechanism, we realized the fuel cells were capturing just about every bit of carbon dioxide that came into them, and they were really good at separating it to the other side,” said Brian Setzler, assistant professor for research in chemical and biomolecular engineering and paper co-author.

While this isn’t good for the fuel cell, the team knew if they could leverage this built-in “self-purging” process in a separate device upstream from the fuel cell stack, they could turn it into a carbon dioxide separator.

“It turns out our approach is very effective. We can capture 99% of the carbon dioxide out of the air in one pass if we have the right design and right configuration,” said Yan.

They found a way to embed the power source for the electrochemical technology inside the separation membrane. The approach involved internally short-circuiting the device.

“It’s risky, but we managed to control this short-circuited fuel cell by hydrogen. And by using this internal electrically shorted membrane, we were able to get rid of the bulky components, such as bipolar plates, current collectors or any electrical wires typically found in a fuel cell stack,” said Lin Shi, a doctoral candidate in the Yan group and the paper’s lead author.

Now, the research team had an electrochemical device that looked like a normal filtration membrane made for separating out gases, but with the capability to continuously pick up minute amounts of carbon dioxide from the air like a more complicated electrochemical system.

In effect, embedding the device’s wires inside the membrane created a short-cut that made it easier for the carbon dioxide particles to travel from one side to the other. It also enabled the team to construct a compact, spiral module with a large surface area in a small volume. In other words, they now have a smaller package capable of filtering greater quantities of air at a time, making it both effective and cost-effective for fuel cell applications. Meanwhile, fewer components mean less cost, and more importantly, provide a way to easily scale up for the market.

The research team’s results showed that an electrochemical cell measuring 2 inches by 2 inches could continuously remove about 99% of the carbon dioxide found in air flowing at a rate of approximately two liters per minute. An early prototype spiral device about the size of a 12-ounce soda can is capable of filtering 10 liters of air per minute and scrubbing out 98% of the carbon dioxide, the researchers said.

In Apps and WebSmartphones
on 17 October 20202 min read

Scaled for an automotive application, the device would be roughly the size of a gallon of milk, Setzler said, but the device could be used to remove carbon dioxide elsewhere, too. For example, the UD-patented technology could enable lighter, more efficient carbon dioxide removal devices in spacecraft or submarines, where ongoing filtration is critical.

“We have some ideas for a long-term roadmap that can really help us get there,” said Setzler.

According to Shi, since the electrochemical system is powered by hydrogen, as the hydrogen economy develops, this electrochemical device could also be used in airplanes and buildings where air recirculation is desired as an energy-saving measure. Later this month, following his dissertation defense, Shi will join Versogen, a UD spinoff company founded by Yan, to continue advancing research toward sustainable green hydrogen.

Co-authors on the paper from the Yan lab include Yun Zhao, co-first author and research associate, who performed experimental work essential for testing the device; Stephanie Matz, a doctoral student who contributed to the designing and fabrication of the spiral module, and Shimshon Gottesfeld, an adjunct professor of chemical and biomolecular engineering at UD. Gottesfeld was principal investigator on the 2019 project, funded by the Advanced Research Projects Agency-Energy (ARPA-E), that led to the findings.

Provided by
University of Delaware