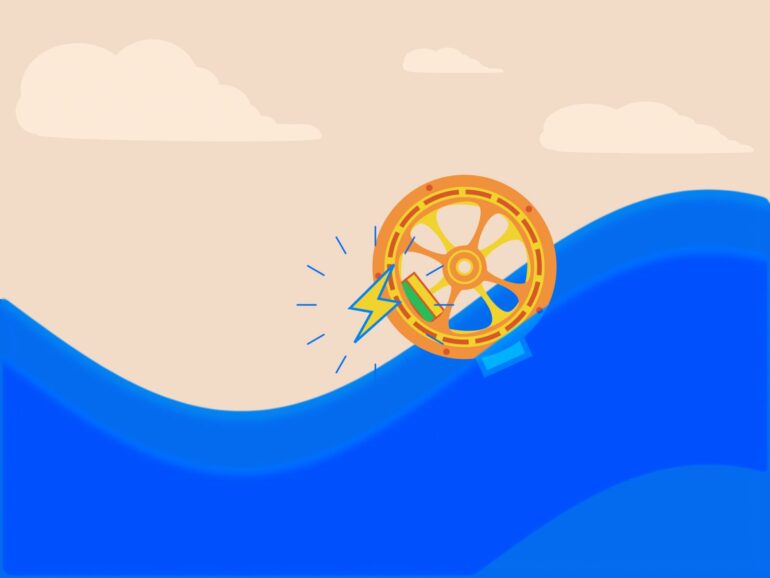 Tsunamis, hurricanes, and maritime weather are monitored using sensors and other devices on platforms in the ocean to help keep coastal communities safe—until the batteries on these platforms run out of juice. Without power, ocean sensors can’t collect critical wave and weather data, which results in safety concerns for coastal communities that rely on accurate maritime weather information. Replacing batteries at sea is also expensive. What if this could all be avoided by powering devices indefinitely from the energy in ocean waves?

Pacific Northwest National Laboratory (PNNL) researchers are working to make this a reality with the development of a new cylindrical triboelectric nanogenerator (TENG)—a small powerhouse that converts wave energy into electricity to power devices at sea. Larger versions of this generator could be used to power ocean observation and communications systems, including acoustic and satellite telemetry.

“TENGs are low cost, lightweight, and can efficiently convert slow, uniform or random waves into power—making them particularly well-suited to powering devices in the open ocean where monitoring and access are challenging and costly,” explained Daniel Deng, a PNNL laboratory fellow and co-developer of the new TENG device.

Deng and his team took a novel approach to advance cylindrical TENGs for use on the open ocean. Their patent-pending frequency-multiplied cylindrical triboelectric nanogenerator (FMC-TENG) uses carefully placed magnets to convert energy more efficiently than other cylindrical TENGs and to better transform slow, uniform waves into electricity. So far, the prototype FMC-TENG has been able to produce enough electricity to power an acoustic transmitter—a type of sensor often included on ocean observing platforms that can be used for communications. This is about the same amount of electricity it takes to power an LED lightbulb.

“We’re developing the FMC-TENG to power everything from ocean observing platforms with multiple sensors to satellite communications, all using the power of the ocean,” said Deng.

If you’ve ever been shocked by static electricity, then you’ve personally experienced the triboelectric effect—the same effect researchers leverage in the FMC-TENG to produce power. A cylindrical TENG is made up of two nested cylinders with the inner cylinder rotating freely. Between the two cylinders are strips of artificial fur, aluminum electrodes, and a material similar to Teflon called fluorinated ethylene propylene (FEP). As the TENG rolls along the surface of an ocean wave, the artificial fur and aluminum electrodes on one cylinder rub against the FEP material on the other cylinder, creating static electricity that can be converted into power.

The more a cylindrical TENG moves, the more energy it generates. That’s why fast, frequent waves can generate more energy than the slower, more uniform waves of the open ocean. To come up with a TENG that could power electronics in the open ocean, Deng and his team set out to increase the amount of wave energy converted into electricity in the FMC-TENG. As it turned out, the key was to temporarily stop the FMC-TENG’s inner cylinder from moving.

In the FMC-TENG, the team positioned magnets to stop the inner cylinder in the device from rotating until it reached the crest of a wave, allowing it to build up more and more potential energy. Nearing the crest of the wave, the magnets released and the internal cylinder started rolling down the wave very quickly. The faster movement produced electricity more efficiently, generating more energy from a slower wave.

A wave energy converter for the open ocean

“The FMC-TENG is unique because there are very few wave energy converters that are efficient and able to generate significant power from low-frequency ocean waves,” said Deng. “This type of generator could potentially power integrated buoys with sensor arrays to track open ocean water, wind, and climate data entirely using renewable ocean energy.”

The study is published in the journal Nano Energy.