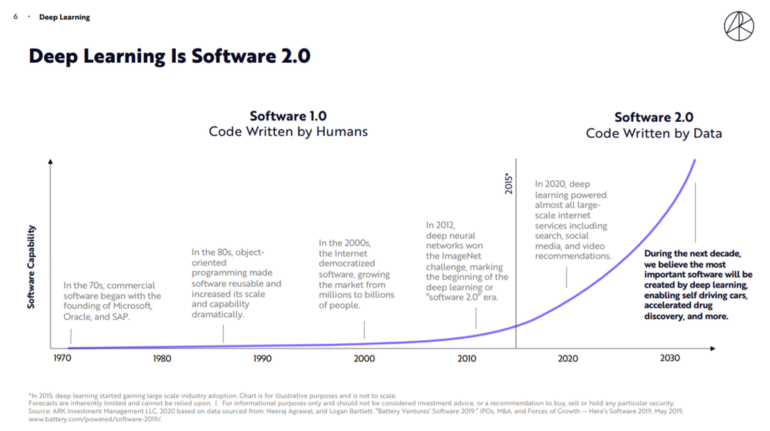 ARK Invest defines ”disruptive innovation” as the introduction of a technologically enabled new product or service that potentially changes the way the world works. ARK focuses solely on offering investment solutions to capture disruptive innovation in the public equity markets.

ARK began publishing Big Ideas in 2017. This annual research report seeks to highlight the latest developments in innovation and offers some of our most provocative research conclusions for the year. ARK notes that risks associated with investment in disruptive innovation include: rapid pace of change, exposure across sectors and markets, uncertainty and unknowns, regulatory hurdles, political and legal pressures and competitive landscape.

ARK Big Ideas 2021 include the following:

The ARK Big Ideas 2021 report is quite comprehensive, covering several key emerging and new technologies and innovation opportunities. I recently interviewed ARK with a focus on the future of autonomous electric vehicles and Tesla. In this article I will share some of the big ideas that I believe to be the most immediately impactful and disruptive innovation for 2021 and beyond.

Deep Learning requires boundless computational power. ARK states: “While advances in hardware and software have been driving down AI training costs by 37% per year, the size of AI models is growing much faster, 10x per year. As a result, total AI training costs continue to climb. We believe that state-of-the-art AI training model costs1 are likely to increase 100-fold, from roughly $1 million today to more than $100 million by 2025.”

Deep Learning will also create a boom in the AI chips. ARK estimates that data center spending on AI processors will scale more than four-fold during the next five years, from $5 billion a year today to $22 billion in 2025. ARK is forecasting an expansion of AI from vision to language. The reports notes: “2020 was the breakthrough year for conversational AI. For the first time, AI systems could understand and generate language with human-like accuracy. Conversational AI requires 10x the computing resources of computer vision and should spur large investments in the coming years.”

Perhaps the biggest bold estimate in the reports is that Deep Learning could create more economic value than the Internet did. ARK believes that deep learning will add $30 trillion to equity market capitalizations during the next 15-20 years.

A virtual world is defined as a computer-simulated environment (video games, augmented reality (AR) and virtual reality (VR)), that can be accessed by anyone at any time. Society interacts daily with virtual worlds which today are in their infancy. According to ARK, revenue from virtual worlds will compound 17% annually from roughly $180 billion today to $390 billion by 2025.

By 2022, consumer-grade AR headsets should turbocharge investments in augmented reality on mobile devices.  ARK forecasts that by 2030 the AR market could scale from under a $1 billion today to $130 billion. ARK estimates that virtual reality could approach realty by 2030 with best-in-class VR headsets only achieving 10% of human visual immersion today.

ARK estimates that digital wallets represent a $4.6 trillion opportunity in your pocket. ARK points to Venmo, Cash App, and venture funded startups who are likely to upend traditional banking by activating the mobile phones — the bank branches — in users’ pockets and handbags.

According to ARK’s research, digital wallets are valued between $250 and $1,900 per user today but could scale to $20,000 per user, representing a $4.6 trillion opportunity in the US by 2025. ARK references China as the best example of digital wallet adoption. Per ARK: The volume of mobile payments in China has exploded more than 15-fold in just five years, from roughly $2 trillion in 2015 to an estimated $36 trillion, nearly three times the size of China’s GDP in 2020.

In the US, digital wallet users are surpassing the number of deposit account holders at the largest financial institutions. Square’s Cash App and PayPal’s Venmo each amassed roughly 60 million active users organically in the last 7 and 10 years, respectively, a milestone that took J.P. Morgan more than 30 years and five acquisitions to reach.

The most important takeaway here is that digital wallets can acquire customers for a fraction of banks’ customer acquisition cost.  According to ARK’s research, compared to the roughly $1,000 that a traditional financial institution might pay to acquire a new checking account customer, digital wallets invest only $20 thanks to viral peer-to-peer payment ecosystems, savvy marketing strategies, and dramatically lower cost structures. Given the rising cost of bank branches, the benefits of mobile banking and digital wallets is key to offset expenditures and also deliver a more seamless user experience.

ARK highlights a potential sizable risk to traditional banks. According to ARK estimates, bank interest income on credit cards fell more than 10%, or roughly $16 billion in 2020 and is likely to drop more than 25% further, from $130 billion in 2019 to $95 billion by 2025. ARK also estimates that at maturity, each digital wallet user could be worth about $20,000. If digital wallets were to become consumer financial dashboards, ARK estimates that the net present value associated with their financial service revenues will exceed $10,000 per average US user.

As bitcoin’s price hit an all-time high, ARK’s research indicated that its network fundamentals remained healthy. Per ARK research, if all S&P 500 companies were to allocate 1% of their cash to bitcoin, ARK estimates that its price would increase by approximately $40,000.  As of November 2020, roughly 60% of Bitcoin’s supply had not moved in more than a year, a testament to the market’s longer-term focus and a holder base with stronger conviction. Another interesting data point about the hype around bitcoins is that ARK shows that bitcoin’s search interest is low relative to the increase in its price. As its price neared all-time highs, Bitcoin’s Google search interest was at 15% of its all-time high.

ARK notes that Bitcoin could play a pivotal role as corporate cash. The research sites Square and MicroStrategy, both with balance sheet investments in bitcoin, are showing the way for public companies to deploy bitcoin as a legitimate alternative to cash. According to our research, if all S&P 500 companies were to allocate 1% of their cash to bitcoin,1 its price could increase by approximately $40,000.

2021 is the year of EVs.  Electric vehicles are approaching sticker price parity with gas-powered cars. Leaders in the EV market are developing innovative battery designs to enable longer range vehicles at lower costs.

Based on Wright’s Law, ARK forecasts that EV sales should increase roughly 20-fold from ~2.2 million in 2020 to 40 million units in 2025. ARK believes the biggest downside risk to our forecast is whether traditional automakers can transition successfully to electric and autonomous vehicles. The total cost of ownership for a like-for-like EV dropped below that of a Toyota Camry in 2019.1 Soon, sticker prices likely will do the same. The auto market is undergoing a shift to both electric and autonomous. ARK believes that traditional automakers lack the software and electrical engineering talent necessary to succeed.

If traditional automakers overcome obstacles, global EV sales could scale roughly 20-fold from 2.2 million in 2020 to 40 million by 2025. ARK expects that sales of smaller, cheaper, “neighborhood electric vehicles” will rise dramatically as a share of total EV sales. 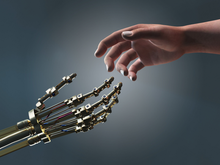 There are some things that machines are simply better at doing than humans, but humans still have plenty going for them. Here’s a look at how the two are going to work in concert to deliver a more powerful future for IT, and the human race.

The robots are coming to help you and create jobs. Per ARK: automation has the potential to shift unpaid labor to paid labor. For example, as food services automate, they will transform food prep, cleanup, and grocery shopping into market activities including food delivery.

ARK believes automation will add 5%, or $1.2 trillion to US GDP during the next five years. Thanks to increased productivity and automation, ARK expects a combination of the following four outcomes:

According to ARK’s research, for every percentage drop in labor share in the industrial and agricultural sectors, operating margins increased 30 basis points and 280 basis points, respectively. ARK would not be surprised to see a similar relationship in all industries. If labor share were to fall 15%, in line with manufacturing, operating margins could double to more than 20%.

Automation could add 5%, or $1.2 trillion, to US GDP during the next five years. ARK believes automation will boost US real GDP growth by 100 basis points on average per year to 3.4%.

The big ideas 2021 report from ARK is incredibly insightful. Here are some more bold predictions you can find in the report:

AUTONOMOUS RIDE-HAILING: ARK’s research suggests that autonomous ride-hailing platforms will generate more than $1 trillion in profits per year by 2030. In addition, automakers and fleet owners could enjoy profits of $250 billion and $70 billion, respectively. Enterprise value for autonomous platform operators could scale to 3.8T by 2025.DRONES:  ARK believes that drone delivery platforms will generate roughly $275 billion in delivery revenues, $50 billion in hardware sales, and $12 billion in mapping revenue by 2030. ARK estimates that at some point during the next five years, drones will deliver more than 20% of parcel shipments and significantly drive e-commerce adoption. While not yet commercialized, ARK estimates that drone delivery platforms will generate nearly $50 billion in revenues, $14 billion in hardware sales, and $3 billion in mapping revenues by 2025. 3D PRINTING: ARK believes 3D printing will revolutionize manufacturing, growing at an annual rate of roughly 60% from $12 billion last year to $120 billion in 2025.  ARK estimates that drone hardware revenues will total roughly $100 billion by 2025.