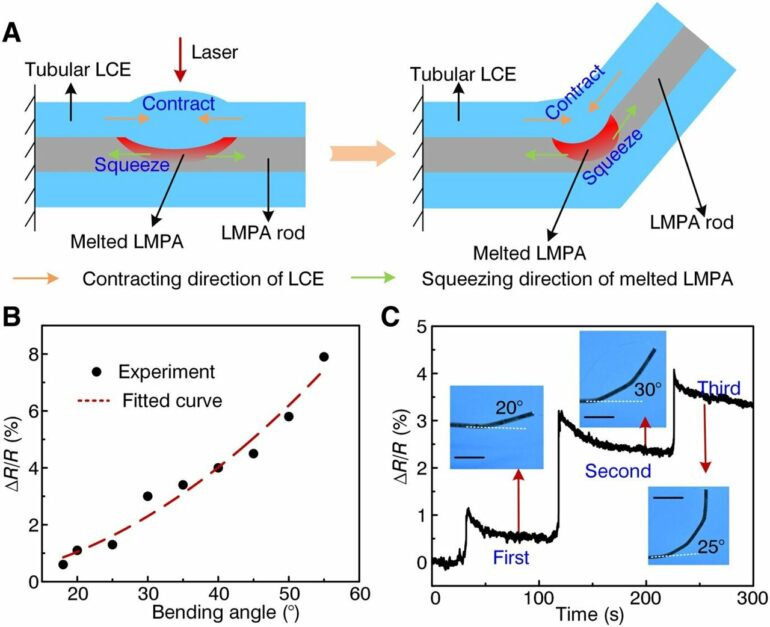 Materials scientists and bioengineers at the intersection of regenerative medicine and bioinspired materials seek to develop shape-programmable artificial muscles with self-sensing capabilities for applications in medicine. In a new report now published on Science Advances, Haoran Liu and a team of researchers in systems and communications engineering at the Frontier Institute of Science and Technology, Jiaotong University, China, were bioinspired by the coupled behavior of muscles, bones, and nerve systems of mammals and other living organisms, to create a multifunctional artificial muscle in the lab. The construct contained polydopamine-coated liquid crystal elastomer (LCE) and low-melting point alloys (LMPA) in a concentric tube or rod. While the team adopted the outer liquid crystal-elastomer to mimic reversible contraction and recovery, they implemented the inner low-melting point alloy for deformation locking, and to detect resistance mechanics, much like bone and nerve functions, respectively. The artificial muscle demonstrated a range of performances, including regulated bending and deformation to support heavy objects and provide a direct and effective approach to design biomimetic soft devices.

Scientists aim to implement biocompatibility between soft robotic elements and human beings for assisted movement and high load-bearing capacity; however, such efforts are challenging. Most traditional robots are still in use in industrial, agricultural and aerospace settings for high-precision sensor-based, load-bearing applications. Several functional soft robots contrastingly depend on materials to improve the security of human-machine interactions. Soft robots are therefore complimentary to hard robots with tremendous potential for applications. Biomimetic constructs have also provided alternative inspiration to emulate the skeleton-muscle-nerve system to facilitate agile movement, quick reaction or thinking, with a unique body shape to fit tasks and perform diverse physiological functions. In this work, Liu et al. were inspired by the fascinating idea of biomimicry to develop multifunctional artificial muscles to provide a simple approach for smart applications.

Biomimicry in the lab

During the experiments, the team imparted shape-programmable, deformation-locking and self-sensing features via liquid crystal elastomers (LCE), and low melting point alloys (LMPA) in the shape of a concentric tube or rod. While the outer elastomer provided reversible contraction and recovery, the inner alloy delivered shape loading for the functions of muscles and bones. To achieve rapid photothermal conversion under light irradiation, the team coated a thin film of polydopamine on the surface of the elastomer, and triggered contraction and bending deformation. The process allowed convenient functionality in complex and unknown environments to create shape-configurable artificial muscles with high load-bearing capacity and low power consumption for smart functionality.

The team showed the proposed multifunctional muscle coupled with soft elastomer and hard alloy materials. Liu et al. prepared the liquid crystal elastomers (LCE), using Michael addition reactions with amines and thiols, and created a loosely cross-linked hollow elastomer tube via gelation in a glass tube or rod. The researchers introduced the photothermal effect by developing a polydopamine layer on the material surface to maintain excellent photostability and strong absorption characteristics in the near infrared range. The team showed how the multifunctional artificial muscles could be developed by embedding pre-fabricated low melting point alloys (LMPA) into the polymer-coated LCE tube. They then irradiated the side of the artificial muscle with a laser and caused instant transformation of light into heat in the region. Comparative analysis of deformation showed instant bending about six seconds after laser irradiation, highlighting the influence of LMPA on the excellent properties of muscle deformation.

Characterizing the multifunctional artificial muscles as a reconfigurable antenna

The team characterized the rapid shape transformation and deformation locking performance of the artificial muscle via a range of experiments including cyclic tests to demonstrate its deformation capacity. They further characterized the sensing functions to monitor the dynamic behavior of artificial muscles in real-time based on changes in electrical resistance. Liu et al. made further use of the multi-material properties and demonstrated applications of the proposed multifunctional artificial materials, as a reconfigurable antenna. In this instance, they measured the bending angle by applying the laser on the artificial muscle surface, to function as a remotely controlled reconfigurable antenna.

Toward manufacturing semitransparent solar cells the size of windows

In this way, Haoran Liu and colleagues developed a shape-programmable, deformation-locking and self-sensing artificial muscle based on the behavioral characteristics of living bones, muscles, and nerves using soft elastomer materials coupled with high-stiffness alloy materials. The rigid low melting point alloy (LMPA) mimicked the endoskeletons of living organisms, to provide structural strength, while pure soft materials made of the liquid crystal elastomer (LCE), offered powerful actuating stress and secure physical compatibility to mimic the natural muscle. The study provided a first instance, to form an artificial muscle with aforementioned features, where the constructs showed rapid shape transformation and deformation properties to yield proof-of-concept robot arms with applications across haptic displays and medicine.