Best iPad accessories in 2021: The best dock, hub, and more for your USB-C iPad 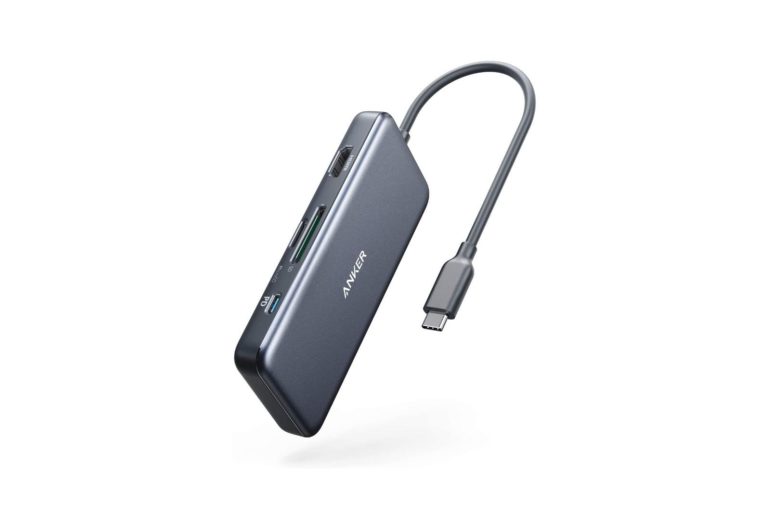 For some, Apple’s iPad is more than just a tablet. It’s a computer. With the addition of trackpad support in early 2020, and the rollout of the Magic Keyboard with Trackpad for the iPad Pro lineup and the fourth-generation iPad Air, the iPad lineup has never looked or worked more like a laptop.

However, with only a single port on the Pro and Air, connecting multiple accessories to the tablet can be a chore. For example, if you’re using the iPad with a USB keyboard, you have to disconnect the keyboard if you want to transfer some files to an external SSD.

Both iPad Pro models, as well as the fourth-generation iPad Air, have a USB-C port that makes the tablets compatible with most, if not all, USB-C docks and hubs.

There are several docks and hubs that make connecting multiple devices and accessories, including external monitors, to the iPad a breeze. Below you’ll find a mix of devices from various companies at a wide range of price points that I’ve personally tested with the 2018 iPad Pro.

I specifically picked devices that would appeal to all types of iPad users, ranging from someone who just wants a couple of extra ports to someone who wants a dedicated workstation.


Low-cost solution with a number of ports 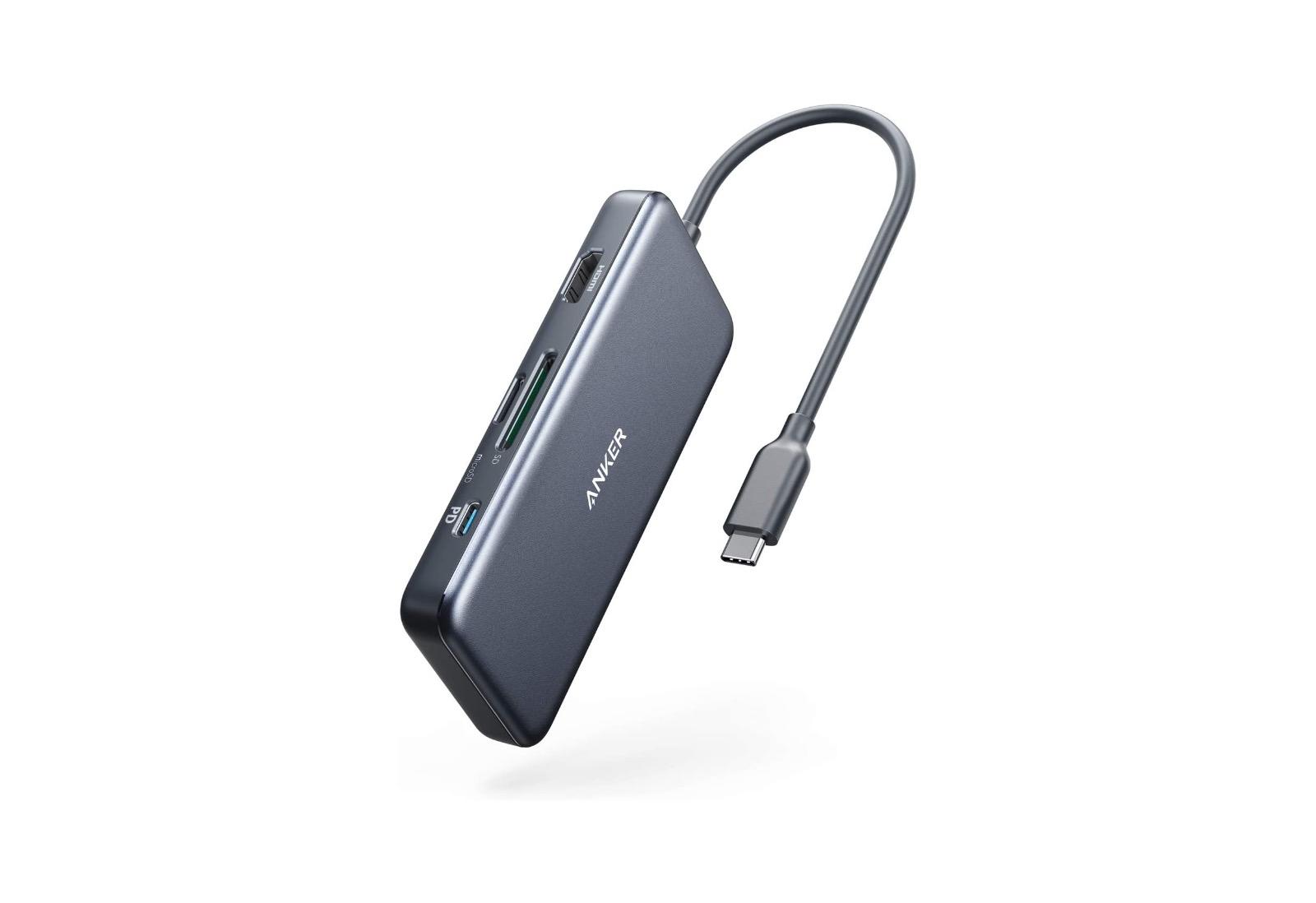 
Anker’s USB-C 7-in-1 hub is the most affordable option of the group, but don’t discount its capabilities. As is often the case with hubs, the name includes the number of ports that it has.

The HDMI port supports a single 4K display with a refresh rate of 30Hz, and the USB ports (both A and C) support up to 5Gbps transfer speeds for transferring files.

The Anker 7-in-1 is a low-cost solution that lacks support for faster display refresh rates, or other notable connections like audio or Ethernet. However, it does a fantastic job at giving your iPad extra ports.


Paying a premium for an Apple product


Apple’s own USB-C adapter was originally released for MacBooks, but it also works with the company’s iPad Pro and Air tablet lineup. You’re paying a premium for an Apple product, however. There are only three ports on the AV Multiport Adapter: HDMI, USB-A, and USB-C.

The USB-A port works with external hard drives or accessories, while the USB-C port only acts as a power pass-through for charging your iPad (or MacBook). The HDMI port supports up to 4K at 60Hz for all iPad models and a limited selection of MacBook models.

I included Apple’s hub in the list simply because, if you’ve owned a MacBook after Apple switched to USB-C, odds are you also have one of these adapters. I wanted to highlight that it does indeed work with the iPad Pro or Air and does a good job at providing minimal connections.

It’s expensive for what it offers, but that’s usually the case with Apple accessories (and some products.)


Connect random accessories and devices to your iPad 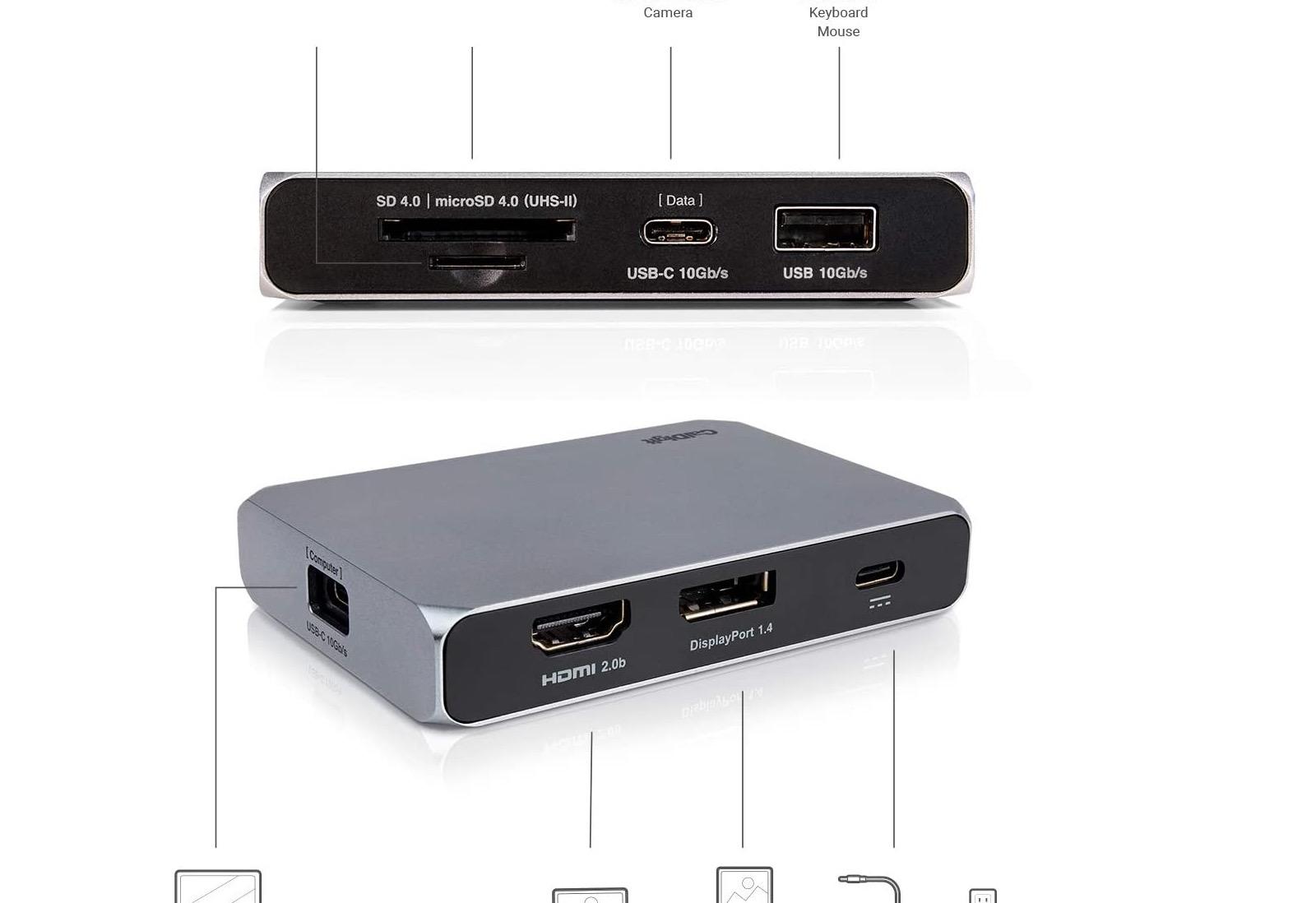 
For $10 more than Apple’s adapter, you can get the CalDigit USB-C Soho Dock. With a total of eight ports, you can connect random accessories and devices to your iPad without having to figure out what to unplug.

The total list of ports includes 1 x USB-C (10Gb/s) that connects the dock to your iPad. There’s another USB-C port next to a standard USB port, both of which offer 10Gb/s speeds, a full-size SD card port, and a microSD card port. When it comes to external displays, you have an HDMI port and a DisplayPort with [email protected] with HDR support. Next to the display connections is another USB-C port that only serves as a 100W PD receptacle to power all of your USB devices and charge the tablet or computer attached to the dock.

Instead of lengthy housing, the Soho has a rectangular design with ports on three of four sides. It’s a unique design since most hubs (like the aforementioned Anker) have a similar design.

At $80, the Soho isn’t overpriced and offers a wide range of connections and speeds.


Near the high-end of the docks 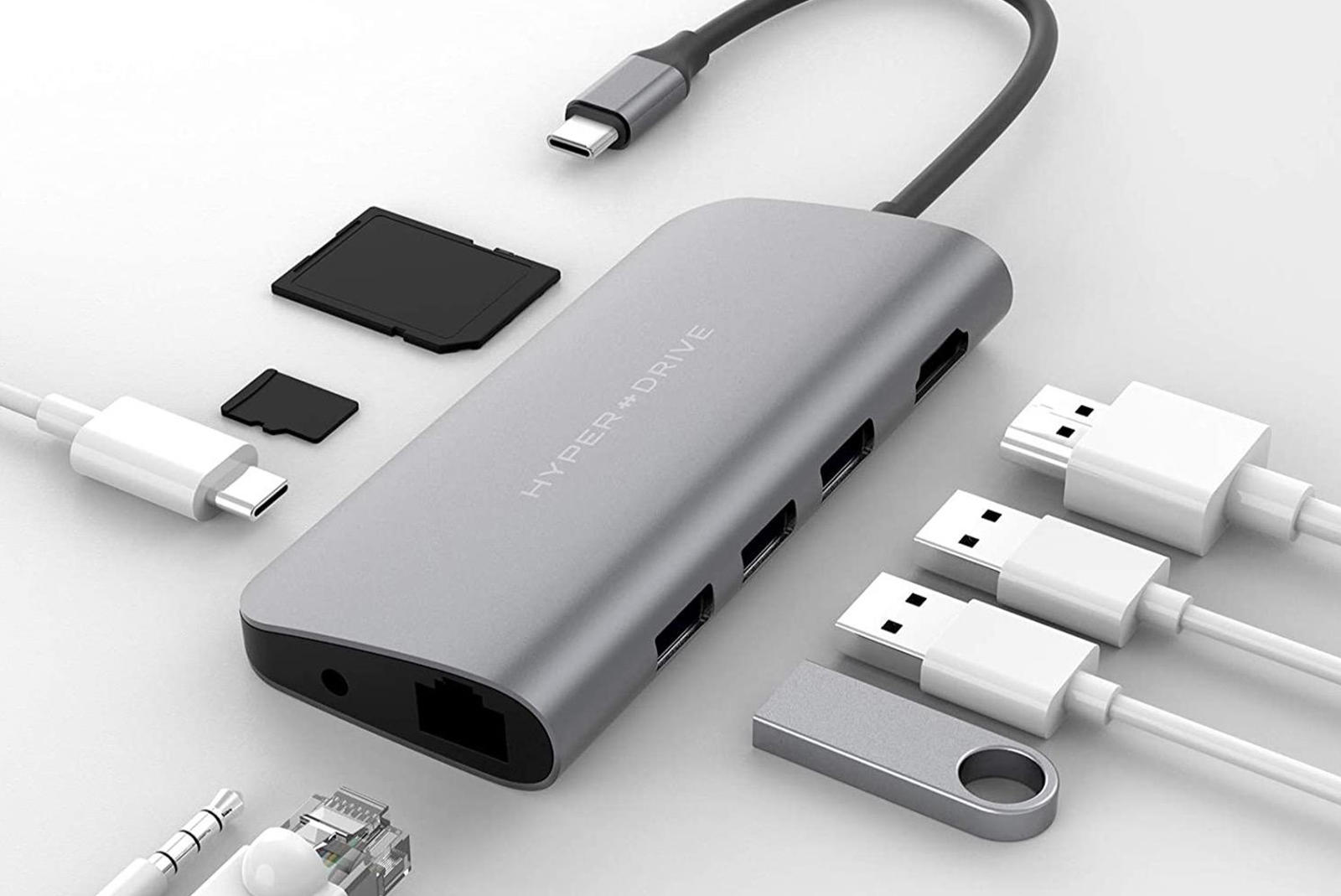 
The HyperDrive Power 9-in-1 hub is near the high-end of the docks I cover here, but for good reason. With nine total ports and a lengthy USB-C cable that connects to the iPad, there’s not a lot you can’t connect to or do with the HyperDrive.

The headphone jack may be confusing at first glance, and I’ll admit even I was perplexed by it. Then I remember that, whenever you’re using a dock or hub with the iPad, it automatically routes all audio through the HDMI connection. By connecting a speaker or a pair of headphones to the audio jack on the Power hub, you’re able to listen to system sounds or music.

For someone who needs more than one or two USB ports, and prefers a hardwired Ethernet connection, the HyperDrive Power is where it’s at. 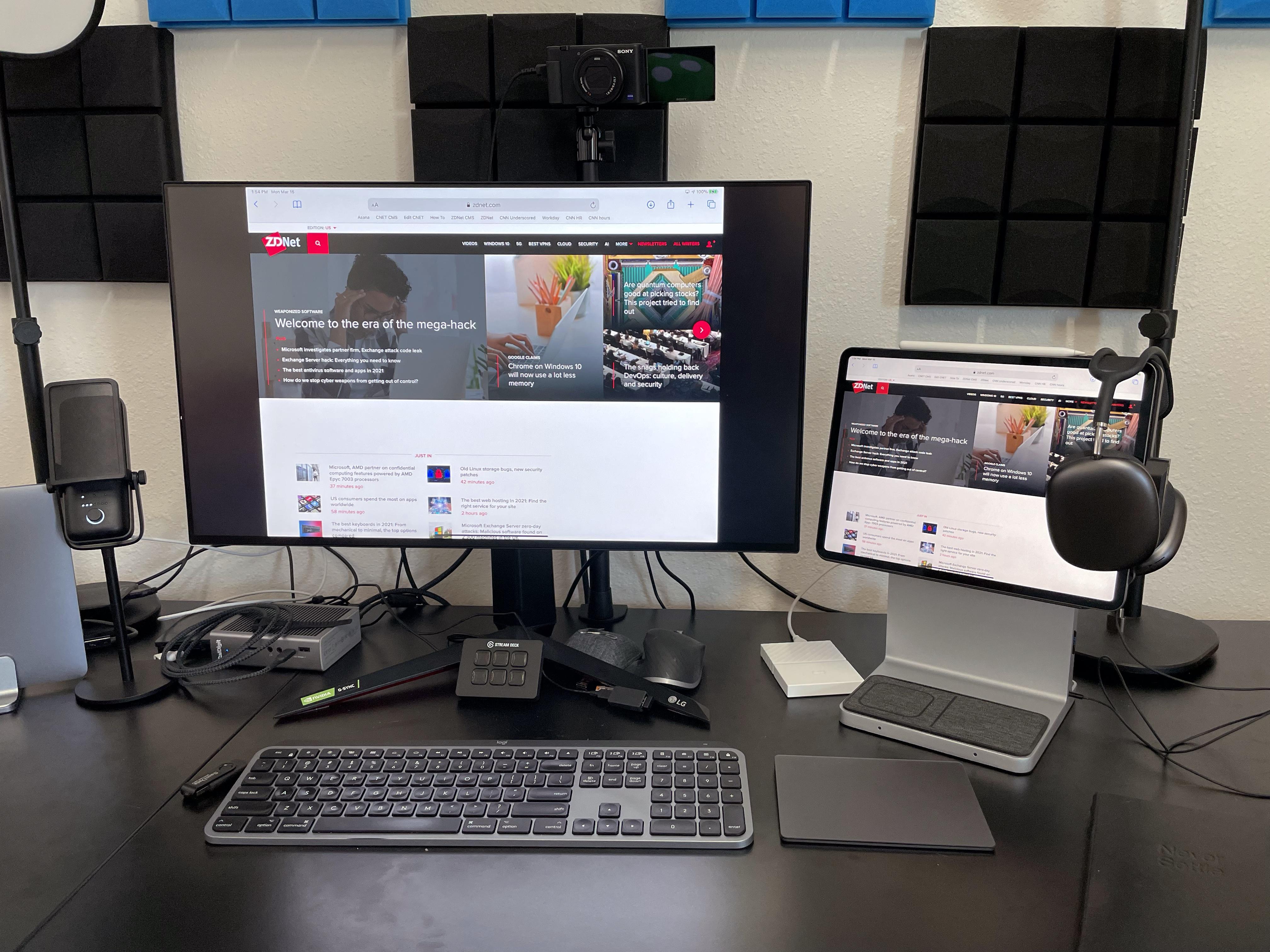 
By far the most expensive dock of the bunch, the Kensington Studio Dock is also the most capable. Pricing starts at $379 for the 11-inch iPad Pro/4th Gen. iPad Air version. It costs $399 for the 12.9-inch iPad Pro version.

In AICompaniesStartups
on 9 June 20214 min read

I wrote a more thorough review of the Studio Dock you can read here, but I’ll run down the features. At the base of the stand are two Qi charging pads, one for your iPhone the other for your AirPods (or any other Qi-compatible device). There’s a 3.5mm headphone jack, an SD card reader, a gigabit Ethernet port, 3 x USB 3.0 ports, an HDMI [email protected] port, and a USB-C port with 18W throughput.

Above the ports is where you dock the iPad into the stand, with magnets and a USB-C adapter holding it in place and powering your iPad at the same time. The stand rotates your iPad’s screen, making it easy to trigger Face ID or adjust it whenever you need to use an Apple Pencil to write or draw on the screen.

The StudioDock is a pro-level accessory that combines several different products into one device. 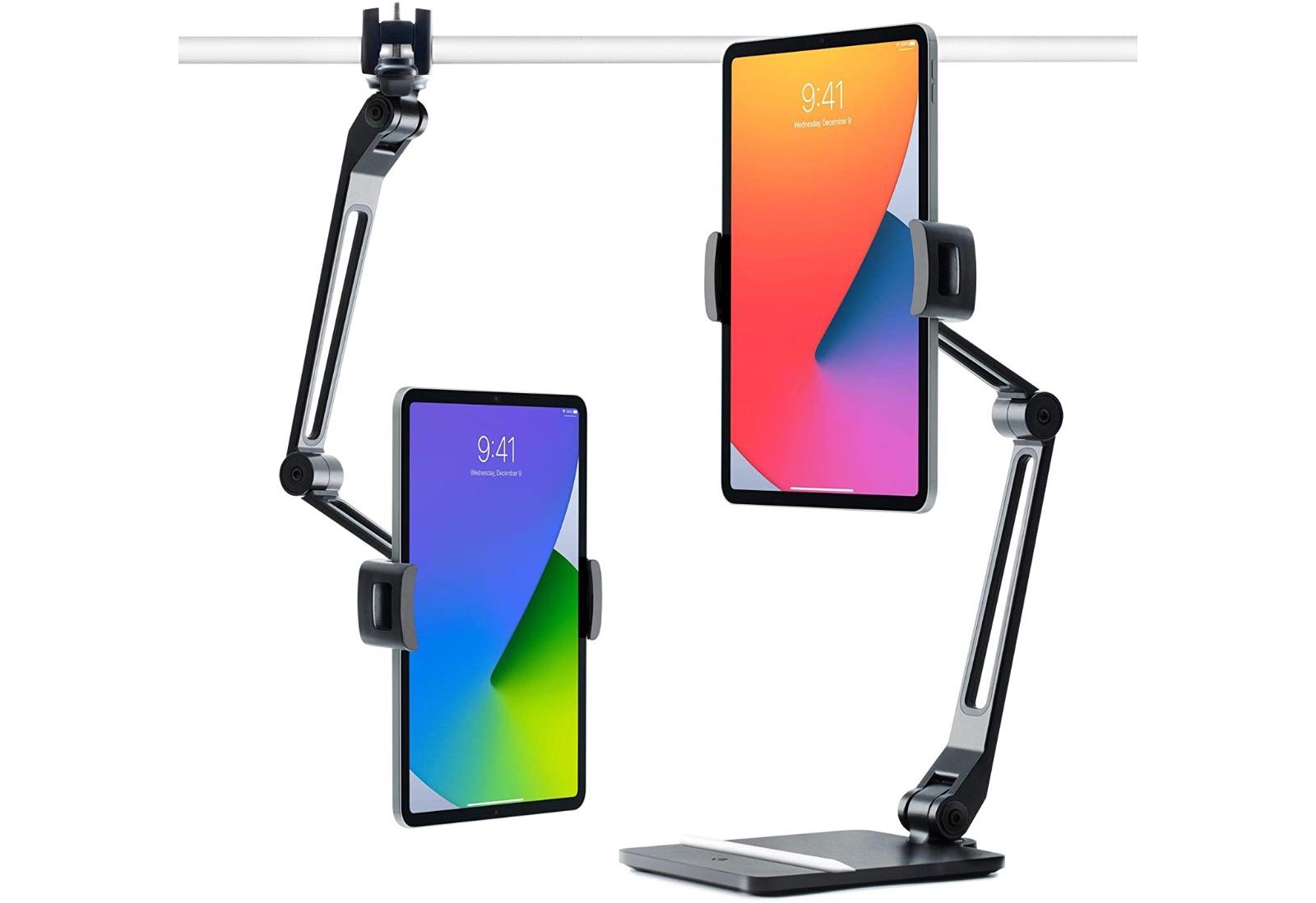 
While the HoverBar Duo isn’t a hub, it lends itself to being included in this list because it provides a way to use the iPad in a way that mimics a desktop feel.

I spent the last three months using all of these hubs and docks with a 2018 iPad Pro. Using each dock or hub for several days, I would test the ports, connections, and reliability of the accessory during my time using it.

At times, my iPad would be connected to an external display. Other times, the hub would only serve as a means to connect external storage and accessories to the tablet, without a display attached.

The type of hub you want or need for your iPad will depend on your budget and how you use the tablet. Something like the Studio Dock is clearly for someone who uses the iPad as a computer replacement and doesn’t mind paying a lot for it. It’s easily the most versatile gadget out of the group.

Whereas the Anker hub is for someone who doesn’t want to spend a lot on a hub and doesn’t mind if it doesn’t have all of the bells and whistles as the rest of the hubs covered.

My favorite picks go between the HyperDrive Power 9 and the StudioDock, but I do most of my work on an iPad. The Soho Dock is something I’ve found myself using with a MacBook Pro and my iPad Pro, because of the DisplayPort and HDMI connections on the back.