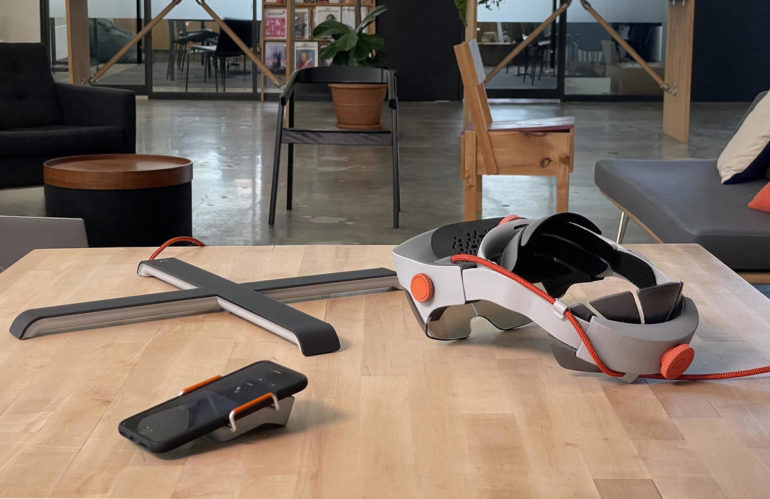 While the idea of collaborating around augmented reality images sounds tantalizing in theory, it rarely happens in practice for reasons that include awkward setup, orienting around new collaboration apps and gestures, and difficulty in getting 3D models from popular design apps into the system.

Campfire is hoping to bring augmented and virtual reality to the next level of adoption via an integrated system of hardware and software that includes a new headset and a “console” consisting of two magnetically interlocking sticks (resembling the base of the product’s namesake) that act as an anchor and projecting hub for digital objects that can appear over the console or in other parts of the room.

While the company hasn’t yet released system requirements for its product, it requires a PC with relatively powerful discrete graphics. The company claims that setting up one of its headsets is as easy as setting up an external monitor (but it cannot function as a virtual monitor like Lenovo’s ThinkReality A3) and that it handily beats the HoloLens in terms of field of view.

The Campfire headset extends further out than most and, somewhat like Varjo’s high-end headsets, works with either a clear (for AR) or opaque (for VR) front lens that attaches magnetically. According to Campfire, the extended facial clearance helps accommodate those who wear eyeglasses as well as enables peripheral vision, which it says can help alleviate the nausea issues some people experience using virtual reality (although it acknowledges it makes for a less immersive experience).

Beyond addressing such sensitivities, the window into the real world enables navigating and manipulating the virtual environment via a standard smartphone app. Unlike with the ThinkReality A3 and Motorola smartphones, however, there is no cable connection between the headset and smartphone. Rather, the smartphone communicates with the console via an attachment that clips onto their back.

Campfire says its environment can handle an extensive array of 3D object manipulations and transformations but is of course not intended to compete with professional design applications. Furthermore, the final component to Campfire is a “reader” app that allows those who just need to tune in without manipulating objects to do so. It takes advantage of Apple’s ARKit, allowing the user to create a virtual version of Campfire’s console to act as the center of the AR experience.

Unlike most headset systems, Campfire is not positioning as an open platform or even one with an API. Rather, its functionality is designed to plug into existing collaboration tools such as Zoom and Teams as opposed to apps such as Spatial that define a collaboration environment.

But there’s yet another major reason why AR has not gone mainstream around knowledge workers: Price. AR headsets start at thousands of dollars and can extend into the tens of thousands to outfit a team. In addition to options from Microsoft and Lenovo, once-heralded Magic Leap is expected to ship its next-generation headset this year. At least for now, Campfire is mum on its pricing except to note that it will offer its focused solution as an all-in service with its first target customers being design professionals.

Smart glasses carve a lighter path forward for extended reality
The Lenovo ThinkReality A3 is a forerunner to a wave of lighter-weight but still a session-driven category of viewers that Qualcomm hopes to foster with its XR1 reference design.

Varjo’s technology is like a magic leap forward in augmented reality
In a nondescript headquarters building on a quiet side street in Helsinki, with a modest amount of startup capital, Finland’s Varjo has put together a headset that offers a major advance in augmented, or “mixed” reality. ZDNet traveled to Finland and gave it a try.