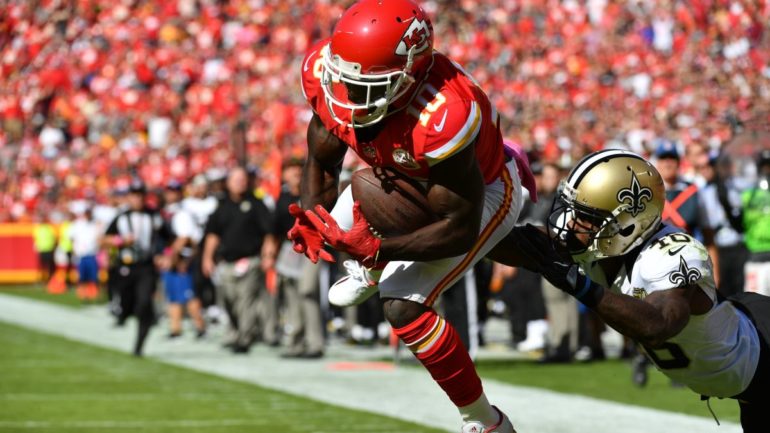 The AFC’s No. 1 seed Kanas Cty takes on the NFC’s No. 2 seed New Orleans in what looks like the game of the season – and a potential Super Bowl LV preview. Follow our guide as we explain where to find a Chiefs vs Saints live stream and watch all the NFL week 15 action online, no matter where you are in the world right now.

Both franchises have generally been superb this year, but looked off-color last weekend. But whereas KC managed to squeak past Miami, New Orleans lost to Philly and in doing so surrendered the NFC’s top seed to the Packers. Can NO throw a cat amongst the pigeons and bounce back in style against the defending champions?

The Kansas City Chiefs vs New Orleans Saints game kicks off today (Sunday, December 20) at 4.25pm ET/1.25pm PT in the US, where it’s being played at Mercedes-Benz Superdome in New Orleans, Louisiana. That’s 9.25pm GMT for fans in the UK. Full NFL live streaming and TV channel details are below – and you can watch your preferred coverage from anywhere by drawing up a clever VPN play.

The Phins defense managed to prove that Patrick Mahomes is human last weekend, forcing him to throw three interceptions for just the second time in his career, more than doubling his interception count for this season, and throwing in a 30-yard sack for good measure.

But you can’t keep Mahomes down for long and, sure as hell, he picked himself up, dusted himself down and pulled off some big plays, linking with Travis Kelce and Tyreek Hill to lead the Chiefs to victory.

But there’s certainly hope here for the Saints, who have one of the meanest defensive units in the league. Well, there’s hope if they manage to get Drew Brees back on the field.

Taysom Hill has done a solid job for NO in Brees’ absence, but last weekend’s shock defeat to the Eagles snapped a nine-game winning streak and certainly rattled more than a few Saints fans’ cages. Even with star running back Alvin Kamara looking as unstoppable as ever, the Saints could struggle without future Hall-of-Famer Brees back under center.

This is a potential Super Bowl 2021 dress rehearsal, so read on as we explain how to watch the Chiefs vs Saints online and get an NFL live stream wherever you are right now for the biggest game of the season.

How to watch the Chiefs vs Saints from outside your country

How to get a FREE Chiefs vs Saints live stream: watch NFL online right now in the US

Today’s Chiefs vs Saints game is being shown on CBS, with kick-off scheduled for 4.25pm ET/1.25pm PT.

How to watch the Chiefs vs Saints FREE without cable

Pricing starts from $64.99 a month, which is a darn sight cheaper than cable, and there’s even a FREE 7-day fuboTV trial you can take advantage of. That means you can watch today’s Chiefs vs Saints game 100% free!

Not interested in signing up for cable or for a streaming service? Yahoo is showing every NFL game that’s being broadcast in your local TV market for free in its Yahoo Sports app, including the Chiefs vs Saints.

Today’s Chiefs vs Saints clash kicks off at 4.25pm ET/1.25pm PT in Canada, and CTV and RDS are providing linear TV coverage.

That obviously means the Chiefs vs Saints game is covered, and it’s an absolute steal as DAZN costs just CA$20 a month or $150 a year – there’s even a free DAZN trial deal currently running that will get you access for nothing! Not only do you get every single NFL game, including NFL Game Pass and RedZone access, but DAZN’s also the exclusive Canadian streaming home of Premier League and Champions League soccer!

Saints vs Chiefs live stream UK: how to watch the NFL online today

You can watch the New Orleans Saints vs Kansas City Chiefs in the UK on Sky Sports, which has the biggest game of the regular season as one of its week 15 featured games.

Kick-off is 9.25pm GMT in the UK, with coverage starting just before on both Sky Sports Main Event and Sky Sports NFL.

If you don’t have a Sky package, fear not – there are plenty of options available that will allow you to get a Saints vs Chiefs UK live stream.

The first is Sky’s own streaming service, Now TV, which has recently price slashed the cost of a 1-month Sky Sports Pass down to just £25! It normally costs £33.99, so it’s a genuine bargain.

Alternatively, you could consider NFL Game Pass Pro, where £49.99 gets you every single game remaining in the 2020/21 season (subject to blackouts) including the playoffs, Super Bowl, RedZone and more!

Alternatively, you can pay a mere £1.99 for a 7-day Game Pass subscription and stream all this weekend’s biggest NFL games, including the Saints vs Chiefs – which kicks off at 9.25pm GMT in the UK.

How to watch Saints vs Chiefs: live stream NFL in Australia

If you live in Australia and want to watch the NFL this season, you have several options to do so and are well covered for this week’s Saints vs Chiefs game, which is scheduled to start at 8.25am AEDT on Monday.

Kayo Sports is also showing the Saints vs Chiefs game and is the perfect alternative for cord-cutters Down Under.

It’s really geared towards international fans and that’s where it’s a great option. In most of the NFL’s main international markets, a Game Pass Pro subscription will get you access to every single regular season and playoff game live, plus the Super Bowl, and you also get the league’s live highlights show, RedZone. It’s now been discounted to just £1.99 a week (or £49.99 for access through July 2021) in the UK, so if you’re a big fan who watches multiple games every week, it breaks down quite favourably.