ExpressVPN review: A fine VPN service, but is it worth the price? 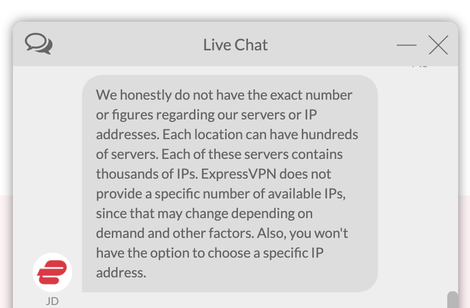 ExpressVPN is a popular VPN that’s easy to set up and easy to use. Oddly enough, though, it’s not much of a standout. Compared to other recommended VPN services, pricing is middle of the road, as are performance and features.

I tried to find out exactly how many servers and IP addresses ExpressVPN has – since other VPN providers tout their numbers. Unfortunately, all the company told me (which is probably more honest and transparent than their stat-driven competitors) was this:

The one place where ExpressVPN does stand out is in its vast number of client implementations. Whatever computing device you have – be it mobile, tablet, laptop or desktop of any OS flavor – ExpressVPN offers a version for your platform.

When I evaluate a VPN, I avoid the big “Connect” button for a while after install. I’m usually far more curious about the various options and settings. In the case of ExpressVPN, I found an option under the “hamburger” menu that I like right away.

This isn’t a point-to-point speed test like Fast.com or Speedtest.net. This is a test of all (or a subset) ExpressVPNs servers from your location.

It took about five minutes, but it was worth the wait. ExpressVPN scans across all their servers to show which were faster in terms of both download speed and latency. Plus, it adds a speed index to tell you which server is faster overall. For me, here in Oregon, it was no surprise that a West Coast server was the fastest overall.

It’s also possible to see servers in different countries and how they stack up.

This is a relatively simple and obvious feature. It’s a wonder more VPN providers don’t offer it.

By default, ExpressVPN provides a very simple startup screen. Just hit the magic button and it will assign you to a server it recommends. Because I live in the Pacific Northwest, Seattle is an obvious choice for location.

Many users will prefer to choose a location to connect. The ExpressVPN connection screen is clean and clear. You can choose from one of the recommended locations, as this screen shows.

You can also browse through all locations.

Or you can use the search bar to quickly pick a destination server at a desired location.

The application allows you to set servers as favorites, so if you have a few you regularly return to, they’re easy to find.

While not a particularly unique feature, the fact that you can open the VPN on Windows startup and connect to the last used location when the app launches means that you can set up a default behavior to connect to a VPN as soon as your computer boots up.

The app also supports a kill switch option, which you can enable or disable, as well as providing access to local devices like printers while connected to a remote server. It allows for traffic sculpting, too, enabling you to use the VPN for certain apps and not for other apps. This is a key feature if you want VPN protection or location translation for some connections, but want to use the full power and speed of your connection for other applications.

The protocol setting screen has a lot of options for protocol geeks. You’re probably best just leaving it on Automatic unless you know what you’re doing or have a very specific preference.

The Shortcuts tab simply lets you put a few web addresses on the main screen. The Browsers tab allows you to control the connection directly from a browser extension. Right now, it supports Chrome and Firefox. Edge is not supported.

Finally, let’s look at the Advanced tab. ExpressVPN does allow you to share telemetry back to the company, but that option is properly disabled by default. You can eliminate IPv6 detection, a feature most will leave on. It’s always nice to optimize Windows networking. But the option that interests me most is the option to only use ExpressVPN DNS servers.

Since a lot of leakage comes via DNS, it’s interesting that ExpressVPN is locking connections to their servers. Let’s see how well that works for them.

I installed the ExpressVPN application on a fresh, fully-updated Windows 10 install. To do this kind of testing, I always use a fresh install so some other company’s VPN leftovers aren’t clogging up the system and possibly influencing results. I have a 1Gb fiber feed, so my baseline network speed is rockin’ fast.

To provide a fair US performance comparison, rather than comparing to my local fiber broadband provider, I used speedtest.net and picked a Comcast server in Chicago to test download speed.

For each test, I connected to each server three times. The number shown below is the average result of the three connections.

In looking at these numbers, it’s possible to get carried away by the difference in the baseline speed compared to the VPN speed. That’s not the best measurement, mostly because I have broadband over fiber so my connection speed is extremely high.

Also, if you look at the baseline speeds between my reviews, you may notice that they differ considerably going to the same cities. Keep in mind that speed tests are entirely dependent on the performance of all the links between the two locations, and that also includes the time of day, how active those servers are, and how slow or fast the internet is on a given day.

Normally, I include a connection to Russia among my tests. But because ExpressVPN does not have a server presence in Russia, I was unable to test performance to Rossiyskaya Federatsiya.

Here are the results of my tests:

Time to connect to VPN

The Jan. 6 hearings are tailor-made for social media – that doesn’t mean they’re reaching a wide audience

When you use a VPN service, it’s natural for performance to drop. After all, you’re running all your packets through an entirely artificial infrastructure designed to hide your path. The real numbers you should look at are the download speed and the ping speed. Are they high enough to do the work you need to do?

For all connections, ExpressVPN was…meh. It wasn’t unusable, but it wasn’t stellar, either. That said, all VPN-based connection speeds were more than enough for almost all kinds of video, so it really was good enough. Ping speeds, on the other hand, were too slow to allow any sort of gaming where responsiveness is required.

There are many different ways a VPN can fail you when it comes to security. But one of the most troublesome is when it reveals you as a potentially untrustworthy user. DNSLeak.com and dnsleaktest.com both identified my international connections as possible DNS leaks. This is not the case, because all of them (like the one below for Stockholm) showed the VPN-connected city, rather than my location here in Oregon.

But there was another problem. Note that both DNS testing services identified my connection as coming from Security Firewall Ltd. No, that’s not ExpressVPN. But then, there’s this:

Yeah, if I were running a site and I was concerned about fraud or VPN usage, I’d block these guys. And so, if your connection appears to be coming from such a concerning set of IPs, I’d call this a security connection fail. Security Firewall Ltd was identified for not just my Sweden connection, but for my Taiwan connection as well.

So if you’re using servers in Sweden and Taiwan and sites you’re connecting to either don’t allow a connection or make usage difficult, you’ll know it’s because, by virtue of your connection through Security Firewall Ltd, you’re considered a potentially troublesome user. Special.

I didn’t see this problem universally. When connecting to Australia, the DNS identified ServersAustralia as the ISP. When testing a connection to India, the ISP was identified as Host1Plus. Both have relatively benign reputations.

It’s weird, though, unless ExpressVPN simply didn’t know about Security Firewall Ltd’s bad Google juice. I would have thought that since ExpressVPN is providing its own DNS, it would have changed up DNS entries for providers that have a tarnished reputation.

What are the pros and cons of ExpressVPN?

I like ExpressVPN, I do. It’s a breeze to set up and configure. I like how you can determine server speed across the entire network. And searching, saving, and configuring locations is dead simple.

But there are a few things that might hold this product back versus its competitors. It’s more expensive than many. That’s not to say it’s wildly overpriced. But at $99 a year, it’s going to have trouble holding its own against those with cheaper plans.

Performance was also not standout. Like I said above, it’s good enough for video, so performance really is good enough to get the job done. It’s just not a wow — except in the ping sense. There, it’s wow, pings take soooo long. Connection speed wasn’t annoying either.

But then there’s that connection to Security Firewall Ltd. You never want an account to be associated with high fraud risk ISPs or IP addresses. Also, if you’re trying to hide the fact that you’re using a VPN, this might not do it.

So, let’s use my two-criteria metric on ExpressVPN: