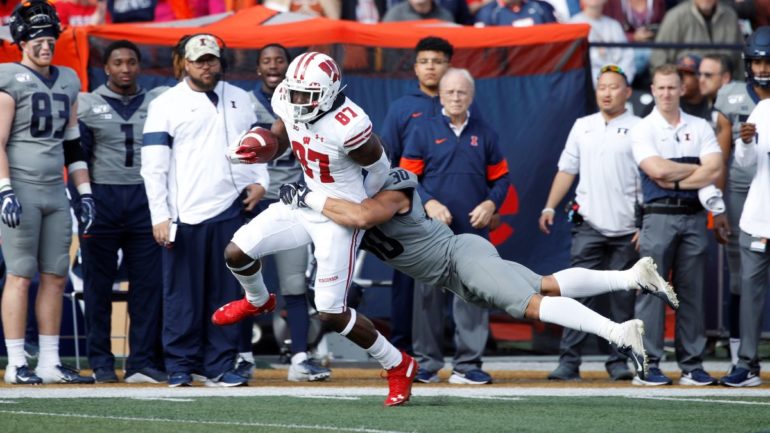 While NCAA college football has been in action for a few weeks, the 2020/21 season only feels truly underway now the Big Ten are back in action this weekend.Things kick-off tonight with a primetime showdown between Wisconsin and Illinois. With the two Great Lakes states bordering each other, it’s a fierce interstate rivalry that’s produced some absolutely thrilling games in the past, so follow our guide as we explain how to get a Illinois vs Wisconsin live stream and watch college football online today.

Illinois vs Wisconsin is the first game of the 2020/21 Big Ten college football season and kicks off today (Friday, October 23) at 8pm ET / 5pm PT at Camp Randall – though Wisconsin’s 80,000+ capacity stadium will be empty. Full TV and college football live stream details are below – and you can watch from anywhere with the help of a good VPN.

On paper, this should be a relative walkover for the Wisconsin Badgers, who enter the season ranked no.14 in the nation, while Illinois are considered one of the Big Ten weakest teams by most experts. Yet the last time the two teams played, the Fighting Illini pulled off a shock 24-23 win thanks to a last-second field goal from returning kicker James McCourt. Surely they can’t do it again?

The Badgers will be hungry for revenge tonight, but head coach Paul Chryst has a decision to make when it comes to replacing star running back Jonathan Taylor, now of the Indianapolis Colts. Sophomore Nakia Watson is tipped to emerge as the new starter this season, but five-year senior Garrett Groshek has experience on his side and blue-chip recruit Jalen Berger is also in the mix. Replacing injured starting quarterback Jack Coan is less of a headache, as redshirt freshman Graham Mertz is highly regarded and flashed his talent in last year’s All-America Bowl, throwing for a a record-breaking five TDs.

If you’re tired of watching Trevor Lawrence polish his Heisman CV against Pop Warner-quality ACC opposition, today’s the day you’ve been waiting for – The Big Ten, or B1G as it’s stylized for reasons unbeknownst to us, is back! Read on as we explain how to watch get a Wisconsin vs Illinois live stream and watch college football online from anywhere in the world.

How to watch Illinois vs Wisconsin from outside your country

Use a VPN to stream college football live from anywhere

Tonight’s  kick-off between Illinois and Wisconsin starts at 8pm ET / 5pm PT and is being shown on the Big Ten Network (BTN), a channel dedicated solely to sports coverage of the illustrious NCAA conference.

Those with cable will find that they now need to head to the Fox Sports website or download the Fox Sports app to watch the Big Ten Network online, logging in with their TV provider credentials to the BTN TV Everywhere live streaming service.

For cord cutters, life couldn’t be easier, as the Big Ten Network is also available to watch online via a number of over-the-top streaming services. In this case, we’d recommend trying Sling TV, as a combined Sling Blue + Sports Extra bundle will let you watch the BTN on a range of devices including PCs/Macs, laptops, tablets, smartphones, and the Xbox One – as well as select set-top boxes, streaming sticks, and smart TVs.

Best of all, you can currently take advantage of a FREE Sling Blue + Sports Extra trial that will let you watch not only tonight’s game, but loads more college football throughout the season.

You can cancel any time within the three-day trial period, but should you decide to keep the service, Sling Blue costs $30 a month and the Sports Extra add-on is $10 on top of that. It’s a great cable replacement solution for football fans in general, as the combined bundle gets you nationally televised games from FS1 and FS2, NFL Network, Big Ten Network and Pac-12 Network, plus NFL RedZone access.

Don’t forget, you can take your college football streaming coverage with you wherever you are with the help of a good VPN.

College football isn’t as big a deal in Canada as it is in the US, but there are still plenty of ways to watch the biggest games, including tonight’s – at least if you’ve got cable TV.

As of the 2020/21 season, the Big Ten Network is available through the following cable providers: Cogeco, Eastlink, Rogers Cable, Shaw Cable, Shaw Direct and VMedia. Head to the relevant website of your service, log-in with your credentials, and you’ll be able to stream the game online just like you’d watch it on TV.

That’s your only option in this case, we’re afraid, as while TSN and DAZN show select college football games, they don’t appear to have rights to any B1G games as far as we can tell.

However, anyone in Canada from a country where that offers additional ways to live stream has the option of grabbing hold of an effective VPN and following our instructions above.

Unfortunately, the Big Ten opener between Illinois and Wisconsin hasn’t been selected for coverage by BT Sport, the UK broadcaster for college football action.

In general, UK American football fans can watch a limited amount of live college football action via BT Sport ESPN, and this week South Florida vs Tulsa is on offer at 12.30am late Friday night/early Saturday morning.

BT TV customers can add BT Sport to their service for just £10 extra a month and most Saturdays, BT Sport ESPN will show the biggest NCAA college football games.

If you don’t want the commitment of a full BT TV contract, there’s now also the option of the BT Sport Monthly Pass, which costs £25 and lets you stream all the same channels you can watch on TV. Smartphones, tablets, consoles, and select streaming devices are all supported, but PCs, laptops, and web browsers aren’t.

Want to catch the college football action in the UK just like you would at home? Or tune back into your UK streaming service from abroad? Then grabbing a VPN will let you log into a compatible IP address so you can live stream as usual

As in the UK, Illinois vs Wisconsin isn’t being shown Down Under, though select college football coverage is available courtesy of Foxtel, which offers it on ESPN and has the Foxtel Go app so you can stream it to your laptop or mobile device (logging in with your Foxtel ID).

For cord cutters or anyone who prefers not to be locked into a lengthy contract,  Kayo Sports is the official over-the-top service of Foxtel and offers extensive streaming-only coverage of all the provider’s sports channels, including all the Fox Sports channels, ESPN and ESPN2, and three beIN Sports channels.

There’s at least six NCAA football games on offer this weekend, to give you a taste of what’s generally on offer.