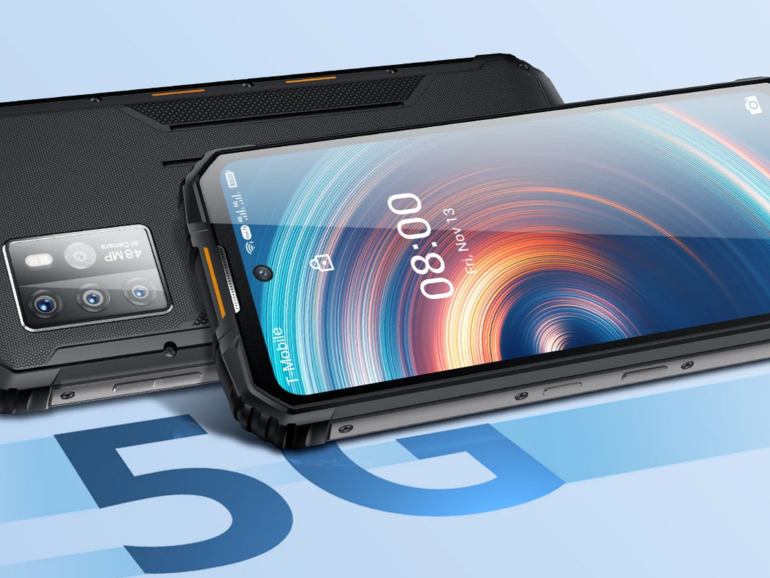 But use two hands, turn it on its side and you have a great workhorse of a phone that is durable and rugged with a long battery life.

The WP10 has an 8,000mAh battery life which seems to last for days of use and has 18W fast charge functionality. It comes in two colours — orange and black — although the orange accents on the phone are hardly noticeable.

It is rated IP69 and IP69K — the top levels of waterproof and dustproofing to perform in MIL-STD 810G harsh environments including drop resistance up to 1.5m. Impressive. Oukitel says that the phone is water resistant in depths of up to 1.5m for up to 30 minutes.

It has a 6.67 inch FHD display, which is the largest I have seen. Its display is 2400 x 1080px and the screen is clear and bright under its scratch resistant Gorilla Glass screen.

Inside the phone there is a MediaTek Dimensity 800 octa-core chipset with four Arm Cortex-A76s and four Cortex-A55s running at up to 2GHz. Its graphics chip is an Arm NATT MC4 chip. The phone comes with 8GB LPDDRAX dual channel RAM and 128GB UFS 2.1 flash storage ROM.

The camera is impressive with a 48MP rear camera with an aperture of f/1.79. At the rear there is also a 13MP ultra wide angle lens giving a field of view of 124 degrees. There is also a 2MP depth and a 2MP macro lens.

Camera effects include bokeh, macro and night features The front facing camera is 16MP with a variety of features including FaceCute — to eliminate lines and brighten your face and an array of icons.

These icons apply a range of filters to your selfie. Turn yourself into a teddy bear, cat, a reindeer, mouse, or give yourself an array of other effects. I spent far too long playing with selfies on this phone. Cute — but not for business.

The Oukitel WP10 also supports 5G, and has NFC and a configurable SOS function button. It also has a PTT (Push to Talk) button so it can be configured to perform like a walkie talkie.

The WP10 has fingerprint and face unlock, both of which work really well. It also has glove mode to operate it in harsh environments. The fingerprint sensor is on the right-hand side of the phone which is a pain if you are left handed.

The Android 10 OS has a few extra items. The Easy Launcher icon displays a UI that looks like the tiles on the Windows Phone home screen.

The interface displays the time, settings, photos, contacts, calendar, clock and Play store tiles along with the phone, text and phone icons. This app, called Quickstep behind the scenes, kept crashing, but would not let me close the app gracefully until I forced a reboot of the phone.

In Apps and WebCompaniesGamingSmartphones
on 13 February 202110 min read

Other apps included a useful set of ToolBag apps including a compass, sound meter, picture hanging tool, a gradient meter, a height measuring tool, a magnifier, protractor, a plumb bob, torch, pedometer and a mirror.

There is also a Child Mode feature. This feature lets you limit the amount of time that the child can use the phone – from 10 minutes up to unlimited time. You can specify whether the child can use mobile data, and set a restriction on data used.

You can also specify the apps that the child is allowed to use. The WP10 has an emergency alert feature which will notify the phone if there are child abduction bulletins, extreme, or severe threats to life and property. Other settings and icons are as standard on an Android 10 device.

The Oukitel WP10 has a nice screen capture float. Find the S-capture in the settings and a floating icon will appear. You can record your actions on screen, take a screenshot of the entire screen and graffiti on it. You can also take different types of screenshot and annotate them.

All in all, the Oukitel WP10 is a superb rugged phone with durability, an extra long battery life and some useful tools.

Stay away from the buggy Easy Launcher app and you’ll get a lot out of this phone. Grab the WP10 this Easter weekend for a discount price of under $375 and get yourself a superb, albeit heavy rugged phone with good performance.