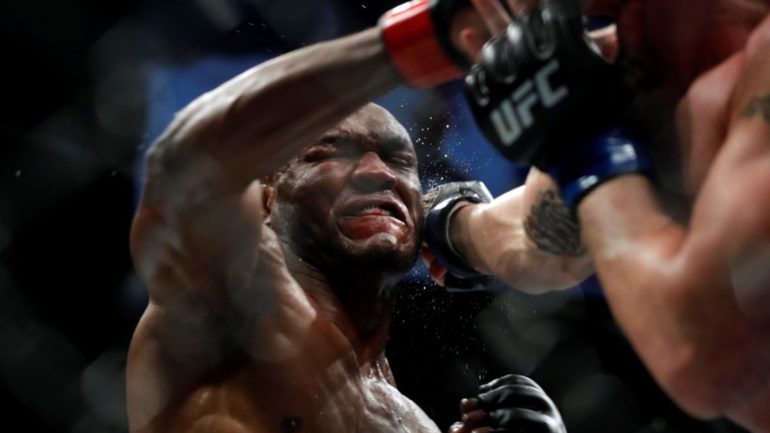 The APEX Center in Las Vegas welcomes back top drawer UFC action this weekend with a mouth-watering welterweight title showdown – here’s how to find a UFC 258 live stream and watch the drama unfold online, plus the start time and much more.

Pitching current title holder Kamaru Usman against his old sparring partner Gilbert Burns, the fight brings with it a huge clash in styles.

Previously scheduled for last summer, the fight has been put on the back burner three times thanks to Burns testing positive for COVID-19 and Usman being forced to withdraw after suffering an injury.

Now finally set to take place in Vegas, this fight stands as one of the most eagerly anticipated UFC match ups for some time.

Usman is currently on a seemingly unstoppable 16-fight win streak. Since claiming the welterweight title from Tyron Woodley in 2019 the 33-year-old has notched up career-defining wins over Colby Covington and Jorge Masvidal.

Burns has chalked up six wins in a row on his way to this, the biggest fight of his career thus far.

The jiu jitsu specialist is fast building a reputation as one of the more lethal strike attack fighters within MMA, and with his darting style in contrast to Usman’s more considered wrestling moves, it could prove a very tricky night for the champ.

With the pair having trained together for years at the famed Sanford MMA gym in Florida – Usman even turning up in Burns’ corner for some of his fights, it adept to be an unmissable match-up.

How to watch Usman vs Burns from outside your country

Read on for specific information on who is showing a UFC 258 live stream on TV and PPV in different countries including the US, UK, Canada, New Zealand and Australia.

But the first thing worth mentioning is that anyone who finds themselves abroad for the event can still watch via their usual home broadcaster or service by using a VPN.

Otherwise known as a Virtual Private Network, it’s a nifty bit of software that lets you access content from your home country completely legally. Crucially, this means you and won’t have to loiter around the internet’s sketchier corners for a stream.

Can I watch a free Usman vs Burns live stream online?

We’ve researched the Usman vs Burns fight extensively, and there just aren’t any ways to watch UFC 258 online free that are legal out there. As ever, anything that proports to be a free Usman vs Burns live stream should be avoided, as in addition to falling foul of the law, it’s also liable to infect your device with all kinds of nasties (especially if you don’t have decent online security).

UFC 258 live stream: how to watch Usman vs Burns in the US right now

You’ll need to be subscribed to ESPN+ in order to watch UFC 258 in the US. However, if you aren’t already a subscriber, there’s an easy way to save cash on your membership and PPV fight at the same time.

You can buy a year’s subscription to ESPN+ and access to this weekend’s fight for just $89.98. Considering members usually have to pay $69.99 for this fight on top of their subscription (that comes in at $59.99 a year), that’s an excellent offer. If you’re already a member you can pick up that PPV ticket by itself for the usual price of $69.99.

Early prelim coverage starts at 6.30pm ET / 3.30pm PT, followed by the main card at 10pm ET / 7pm PT, with Usman and Burns expected to enter the Octagon some time from 12am ET / 9pm PT – depending on the pace of the other fights.

A subscription to ESPN+ also opens up access to live UFC Fight Nights, alongside original content including Dana White’s Contender Series, UFC Destined, and Ariel & The Bad Guy, plus classic fights, replays, and there’s also the perk of fewer commercials.

How to watch Usman vs Burns: live stream UFC 258 in the UK tonight

BT Sport has exclusive broadcast rights to UFC events right now, and the great news is that this weekend’s UFC 258 action won’t be a PPV event in the UK!

You’ll need to tune into BT Sport 1 for all the action from Vegas, with coverage beginning on the channel with their build-up preview show at 12.30am followed by prelims starting at 1am on Sunday ahead of the main show at 3am. Usman and Burns are expected to enter the Octagon from 5am, just after the Maycee Barber vs Alexa Grasso fight.

There are a host of pay-per-view providers offering a Usman vs Burns live stream in Canada this month.

You’ll find UFC 258 and Usman vs Burns available on PPV in Australia, with the main providers being Foxtel Main Event and – for streamers and cord-cutters – Kayo Sports.

For those looking for a streaming-only option, Kayo is the way to go and you can now pre-order the PPV card here – it costs AUD$54.95, the same as on Main Event.

The main Usman vs Burns card is set to take place at 2pm AEDT on Sunday, February 14 which should mean that you won’t have to get up early to catch the main event.

Usman vs Burns are expected to make their way toward the Octagon around 4pm.

Usman vs Burns live stream: how to watch UFC 258 in New Zealand now

Sky Arena is offering New Zealand viewers a Usman vs Burns live stream – with the PPV priced at NZ$39.95 for all the main card action.

You’ll want to make sure you’re watching from at least the 4pm NZDT main card start time on Sunday, February 14 to get all the action.

The headline Usman vs Burns is expected any time from 6pm NZDT, depending on how the rest of the card plays out.

When is Usman vs Burns? UFC 258 date and time

Who is Kamaru Usman?

Born in Auchi, Nigeria, Usman emigrating with his family to the US at the age of 8. Showing early promise as as a wrestler at college he came close to representing his adopted country at the 2012 Olympics only for injury to intervene.

A move to mixed martial arts was an obvious and ultimately successful career change, with the 6ft fighter coming to prominence as the winner of The Ultimate Fighter 21 in 2015.

Having made his UFC debut later that year, he has since gone to notch up a 17-1-0 record, taking the Welterweight from Tyron Woodley in March 2019 at UFC 235 via unanimous decision.

Defending his 170-pound title for the third time tonight, Usman is now one of the sport’s main draws, with his successful defence against Jorge Masvidal generating a whopping 1.3 million pay-per-view buys in the United States alone – the most since UFC 229.

Who is Gilbert Burns?

Switching to MMA, Burns made his UFC debut in July 2014 and has gone on to build up an impressive 19-3-0 record.

His display against Tyron Woodley, which saw him dominate for five rounds to pick up a unanimous decision win, put the Brazilian on the road to this title challenge against his former spar partner.

Usman vs Burns latest odds: who is the favorite to win?

Usman’s champ status alongside his clinical showings in his previous two defences of his title mark him out as clear favourite, with odds hovering around 4/11 with most bookies at the time of writing.

Usman’s last outing and second defence of his title came at UFC 251 on in Abu Dhabi last July, which saw him grind his way to a unanimous decision over fan favourite Jorge Masvidal – a last gasp stand-in for a Covid-19 stricken Burns – to retain his welterweight belt.

Burns, meanwhile, made his last appearance in the Octagon in May last year with an impressive win over former welterweight champion Tyron Woodley via a unanimous points victory, scoring 50-45, 50-44 and 50-44 with the judges.

The main supporting fight is an eye-catching match-up between flyweights Maycee Barber and Alexa Grasso. All eyes will be on how Barber responds after she suffered her first pro defeat and a huge upset in her most recent bout to Roxanne Modafferi in January last year.