WWE Fastlane live stream: how to watch free on Peacock and from anywhere now 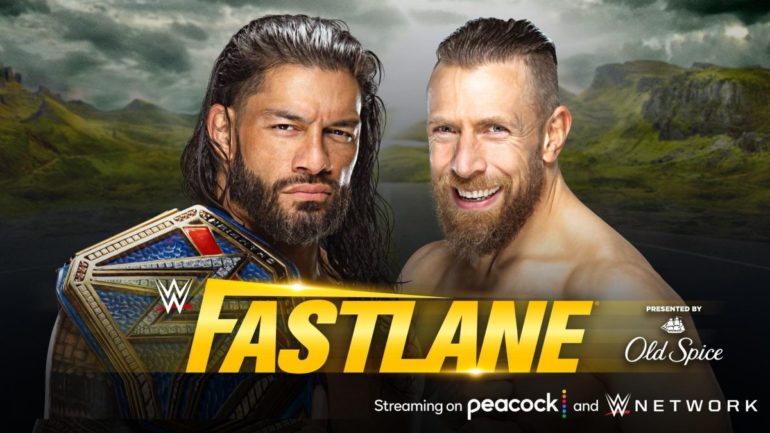 It’s the final WWE pay-per-view event to grace the standard WWE Network channel, and the first to air on Peacock’s brand new WWE home. We’re showing you how to watch Fastlane with a WWE live stream wherever you are in the world, because you won’t want to miss the final PPV step on the road to Wrestlemania.

We’re back in the WWE ThunderDome at Tropicana Field for the sixth Fastlane event in WWE history – and the first since 2019. While fans won’t be able to return to the auditorium just yet, a live audience of virtual viewers will be putting a 2021 spin on Fastlane’s return to our screens.

Wrestlers from Raw and SmackDown will be facing off in a series of Championship fights tonight. Confirmed matchups will see Roman Reigns taking on Daniel Bryan before he faces off against Edge at WrestleMania, and with such a great match between these two contenders at Fastlane 2015 you can bet this will be one to watch.

However, Big E and Apollo Crews will also be using their new found aggression to battle it out for the Intercontinental Championship as well. With tag team matchups featuring Nik Jax and Shayna Baszler facing off against Sasha Banks and Bianca Belair and Alexa Bliss taking on Randy Orton in the inter gender match, there’s plenty of action on the cards tonight.

We’re making sure you don’t miss a second, and showing you how to watch a WWE Fastlane 2021 live stream online – especially now that there’s a brand new service on which to watch with a free trial. Keep reading for options in the US and around the globe.

Live stream WWE Fastlane 2021 from outside your country

You’ll be able to watch WWE Fastlane from a wide range of countries with WWE Network, but if you don’t want to grab a new membership there are plenty more live streams available. We’re rounding up all the best places to watch in the US, Canada, UK, Australia, Japan, and India just below.

If there aren’t any reliable WWE live streams in your country, or if you’re away from home and your plans have been scuppered by geo-blocking, we’ve got a top tip to make sure you don’t miss out as well.

Ways to live stream WWE Fastlane in the US

The WWE Network still offers comprehensive coverage of Fastlane, however this is the last PPV event that will air on the service before it moves to Peacock exclusively. That means we wouldn’t recommend you pick up a full subscription if you’re in the US right now (though the changes won’t make a difference elsewhere in the world).

Instead, head over to Peacock to catch a WWE Fastlane live stream. Peacock will host all future PPV events on its own WWE Network channel, with three subscription tiers. While the free tier won’t give you access to WWE content, you’re actually saving money on the subscription thanks to the Peacock move. A $4.99 subscription will save you over the $10 previous price, and you can even sign up for a 7-day free trial now or go for the limited time offer…four whole months for only $10!View Deal

If you’re an existing WWE Network member, we’d recommend taking advantage of this offer because after April 4 the WWE Network as we know it today will shut down. Yep… if you want to tune into WrestleMania this year, then Peacock will be your only option stateside.

Outside that, other pay-per-view providers including Dish and Xfinity are showing WWE Fastlane but they cost upwards of $44.99. So Peacock seems the obvious place to go.

The pre-show kicks off at 6pm ET / 3pm PT, with the main action starting an hour afterwards.

How to get a WWE live stream in Canada tonight

WWE’s move to Peacock won’t affect Canadian viewers, so the best place to watch Fastlane will be WWE Network. However, you’ll also find coverage via SaskTel, Shaw or BellMTS but expect to pay similar prices to PPV providers in the US.

How to stream WWE Fastlane 2021 live in the UK

BT Sport is the place to be to watch WWE online in the UK. The main card will begin at 11pm GMT, so be sure to head to BT Sport Box Office and grab your £14.95 PPV event before it all kicks off.

You’ll be able to watch your BT Sport event on Sky, Virgin TV and through the BT Box Office app for Android and iOS.

The pre-show is set to start at 10pm for this one, and you’ll need to stay up late for the main event (or watch back the next day) as that kicks off at 11pm tonight.

In AIApps and WebCompaniesSmartphones
on 19 August 202125 min read

If you’re a BT Sport subscriber but find yourself outside the UK and want to tune in, it’s simple to do with a handy tool – simply grab a VPN and follow the instructions above to live stream the action.

Main Event  is your destination if you’re tuning into tonight’s Fastlane live stream from Australia. The PPV event is available for $24.99, with the main show starting at 10am AEDT Monday, March 22 (an hour after the pre-show).

Luckily though, WWE Network is also available in Australia, so that’s also a good choice if you’d prefer to save some cash and even be able to re-watch all of the WWE’s PPV events.

How to live stream WWE Fastlane 2021 in Japan

If you’re watching from Japan, you’ll need to tune in at 8am on Monday morning, and you’ve got a few options for catching a live stream.

The WWE Network has been available in Japan for the last few years, which makes it automatically the most affordable way to watch. Alternatively, DMM.com, J:Com and Sukachan are all listed as offering PPV options.

Sony Ten 1 and Ten 3 will be showing coverage of WWE Fastlane in India this weekend, but you’ll need to be up to tune in at 4.30am IST for the main event. If that’s a little early, you’ll be able to tune into WWE Network for a replay as well.