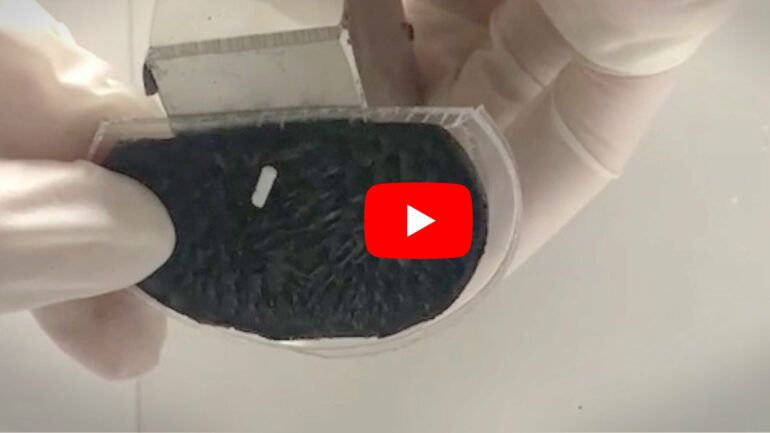 When you hear the term “robot,” you might think of complicated machinery working in factories or roving on other planets. But “millirobots” might change that. They’re robots about as wide as a finger that someday could deliver drugs or perform minimally invasive surgery. Now, researchers reporting in ACS Applied Polymer Materials have developed a soft, biodegradable, magnetic millirobot inspired by the walking and grabbing capabilities of insects.

Some soft millirobots are already being developed for a variety of biomedical applications, thanks to their small size and ability to be powered externally, often by a magnetic field. Their unique structures allow them to inch or roll themselves through the bumpy tissues of our gastrointestinal tract, for example. They could someday even be coated in a drug solution and deliver the medicine exactly where it’s needed in the body. However, most millirobots are made of non-degradable materials, such as silicone, which means they’d have to be surgically removed if used in clinical applications. In addition, these materials aren’t that flexible and don’t allow for much fine-tuning of the robot’s properties, limiting their adaptability. So, Wanfeng Shang, Yajing Shen and colleagues wanted to create a millirobot out of soft, biodegradable materials that can grab, roll and climb, but then easily dissolve away after its job is done.

As a proof of concept, the researchers created a millirobot using a gelatin solution mixed with iron oxide microparticles. Placing the material above a permanent magnet caused the microparticles in the solution to push the gel outward, forming insect-like “legs” along the lines of the magnetic field. Then, the hydrogel was placed in the cold to make it more solid. The final step was to soak the material in ammonium sulfate to cause cross-linking in the hydrogel, making it even stronger. Changing various factors, such as the composition of the ammonium sulfate solution, the thickness of the gel or the strength of the magnetic field allowed the researchers to tune the properties. For example, placing the hydrogel farther away from the magnet resulted in fewer, but longer, legs.

Because the iron oxide microparticles form magnetic chains within the gel, moving a magnet near the hydrogel caused the legs to bend and produce a claw-like grasping motion. In experiments, the material gripped a 3D-printed cylinder and a rubber band and carried each one to new locations. In addition, the researchers tested the millirobot’s ability to deliver a drug by coating it in a dye solution, then rolling it through a stomach model. Once at its destination, the robot unfurled and released the dye with the strategic use of magnets. Since it’s made using water-soluble gelatin, the millirobot easily degraded in water in two days, leaving behind only the tiny magnetic particles. The researchers say that the new millirobot could open up new possibilities for drug delivery and other biomedical applications.