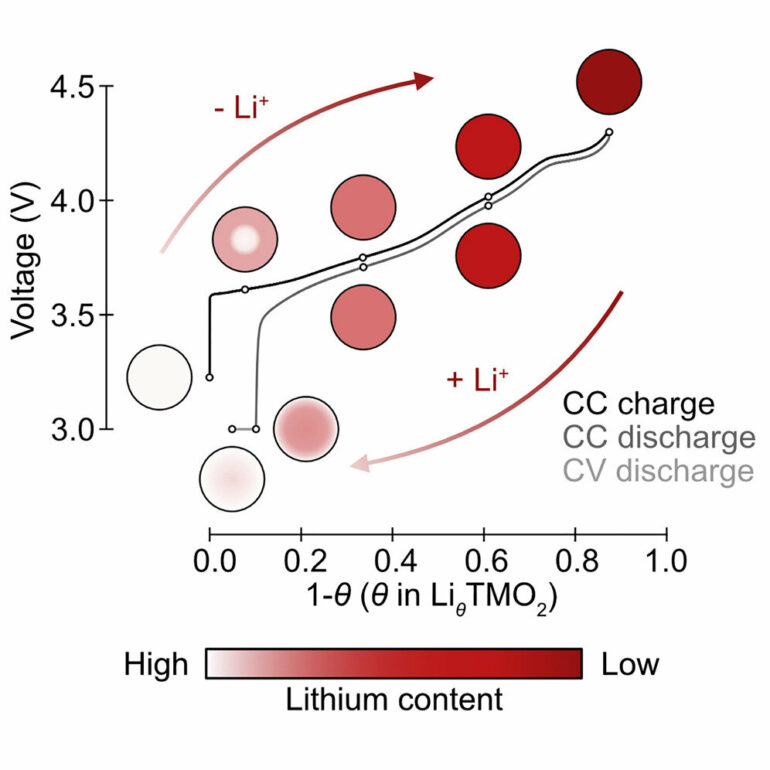 Researchers have found that the irregular movement of lithium ions in next-generation battery materials could be reducing their capacity and hindering their performance.

The team, led by the University of Cambridge, tracked the movement of lithium ions inside a promising new battery material in real time.

It had been assumed that the mechanism by which lithium ions are stored in battery materials is uniform across the individual active particles. However, the Cambridge-led team found that during the charge-discharge cycle, lithium storage is anything but uniform.

When the battery is near the end of its discharge cycle, the surfaces of the active particles become saturated by lithium while their cores are lithium deficient. This results in the loss of reusable lithium and a reduced capacity.

The research could help improve existing battery materials and could accelerate the development of next-generation batteries. The results are published in Joule.

Electrical vehicles (EVs) are vital in the transition to a zero-carbon economy. Most electric vehicles on the road today are powered by lithium-ion batteries, due in part to their high energy density.

Some of the most promising of these materials are state-of-the-art positive electrode materials known as layered lithium nickel-rich oxides, which are widely used in premium EVs. However, their working mechanisms, particularly lithium-ion transport under practical operating conditions, and how this is linked to their electrochemical performance, are not fully understood, so we cannot yet obtain maximum performance from these materials.

By tracking how light interacts with active particles during battery operation under a microscope, the researchers observed distinct differences in lithium storage during the charge-discharge cycle in nickel-rich manganese cobalt oxide (NMC).

“This is the first time that this non-uniformity in lithium storage has been directly observed in individual particles,” said co-first author Alice Merryweather, from Cambridge’s Yusuf Hamied Department of Chemistry. “Real time techniques like ours are essential to capture this while the battery is cycling.”

Combining the experimental observations with computer modeling, the researchers found that the non-uniformity originates from drastic changes to the rate of lithium-ion diffusion in NMC during the charge-discharge cycle. Specifically, lithium ions diffuse slowly in fully lithiated NMC particles, but the diffusion is significantly enhanced once some lithium ions are extracted from these particles.

“Our model provides insights into the range over which lithium-ion diffusion in NMC varies during the early stages of charging,” said co-first author Dr. Shrinidhi Pandurangi from Cambridge’s Department of Engineering. “Our model predicted lithium distributions accurately and captured the degree of heterogeneity observed in experiments. These predictions are key to understanding other battery degradation mechanisms such as particle fracture.”

Importantly, the lithium heterogeneity seen at the end of discharge establishes one reason why nickel-rich cathode materials typically lose around ten percent of their capacity after the first charge-discharge cycle.

“This is significant, considering one industrial standard that is used to determine whether a battery should be retired or not is when it has lost 20 percent of its capacity,” said co-first author Dr. Chao Xu, from ShanghaiTech University, who completed the research while based at Cambridge.


Provided by
University of Cambridge