Wi-Fi could help identify when you’re struggling to breathe 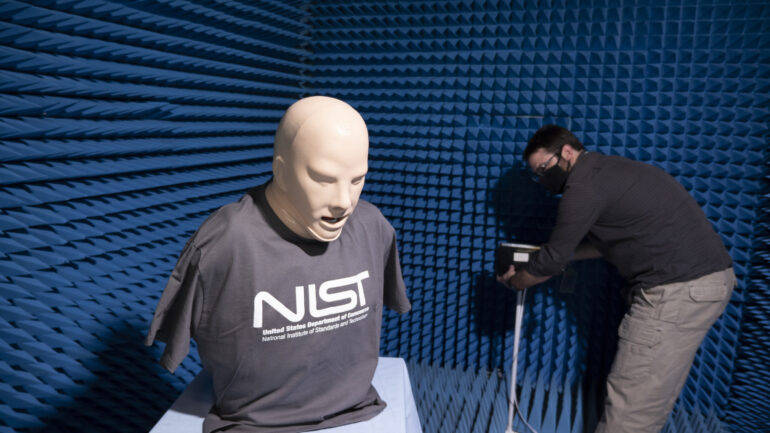 Wi-Fi routers continuously broadcast radio frequencies that your phones, tablets and computers pick up and use to get you online. As the invisible frequencies travel, they bounce off or pass through everything around them—the walls, the furniture and even you. Your movements, even breathing, slightly alter the signal’s path from the router to your device.

Those interactions don’t interrupt your internet connection, but they could signal when someone is in trouble. NIST has developed a deep learning algorithm, called BreatheSmart, that can analyze those minuscule changes to help determine whether someone in the room is struggling to breathe. And it can do so with already available Wi-Fi routers and devices. This work was recently published in IEEE Access.

In 2020 NIST scientists wanted to help doctors fight the COVID-19 pandemic. Patients were isolated; ventilators were scarce. Previous research had explored using Wi-Fi signals to sense people or movement, but these setups often required custom sensing devices, and data from these studies were very limited.

“As everybody’s world was turned upside down, several of us at NIST were thinking about what we could do to help out,” says Jason Coder, who leads NIST’s research in shared spectrum metrology. “We didn’t have time to develop a new device, so how can we use what we already have?”

Working with colleagues at the Office of Science and Engineering Labs (OSEL) in the FDA’s Center for Devices and Radiological Health, Coder and research associate Susanna Mosleh advanced a new way to use existing Wi-Fi routers to measure the breathing rate of a person in the room. In Wi-Fi, the “channel state information,” or CSI, is a set of signals sent from the client (such as a cellphone or laptop) to the access point (such as the router).

These CSI streams are small, less than a kilobyte, so it doesn’t interfere with the flow of data over the channel. The team modified the firmware on the router to ask for these CSI streams more frequently, up to 10 times per second, to get a detailed picture of how the signal was changing.

They set up a manikin used to train medical professionals in an anechoic chamber with a commercial off-the-shelf Wi-Fi router and receiver. This manikin is designed to replicate several breathing conditions, from normal respiration to abnormally slow breathing (called bradypnea), abnormally rapid breathing (tachypnea), asthma, pneumonia and chronic obstructive pulmonary diseases, or COPD.

What alters the Wi-Fi signal is the way the body moves as we breathe. Think of how your chest moves differently when you are wheezing or coughing, compared with breathing normally. As the manikin “breathed,” the movement of its chest altered the path traveled by the Wi-Fi signal. The team members recorded the data provided by the CSI streams. Although they collected a wealth of data, they still needed help to make sense of what they had gathered.

“This is where we can leverage deep learning,” Coder said.

Deep learning is a subset of artificial intelligence, a type of machine learning that mimics humans’ ability to learn from their past actions and improves the machine’s ability to recognize patterns and analyze new data.

Mosleh worked on a deep learning algorithm to comb through the CSI data, understand it, and recognize patterns that indicated different breathing problems. The algorithm, which they named BreatheSmart, successfully classified a variety of respiratory patterns simulated with the manikin 99.54% of the time.

“Most of the work that’s been done before was working with very limited data,” Mosleh says. “We were able to collect data with a lot of simulated respiratory scenarios, which contributes to the diversity of the training set that was available to the algorithm.”

There has been a lot of interest in using Wi-Fi signals for sensing applications, Coder says. He and Mosleh hope that app and software developers can use the process presented in the work as a framework to create programs to remotely monitor breathing.

“All the ways we’re gathering the data is done on software on the access point (in this case, the router), which could be done by an app on a phone,” Coder says. “This work tries to lay out how somebody can develop and test their own algorithm. This is a framework to help them get relevant information.”