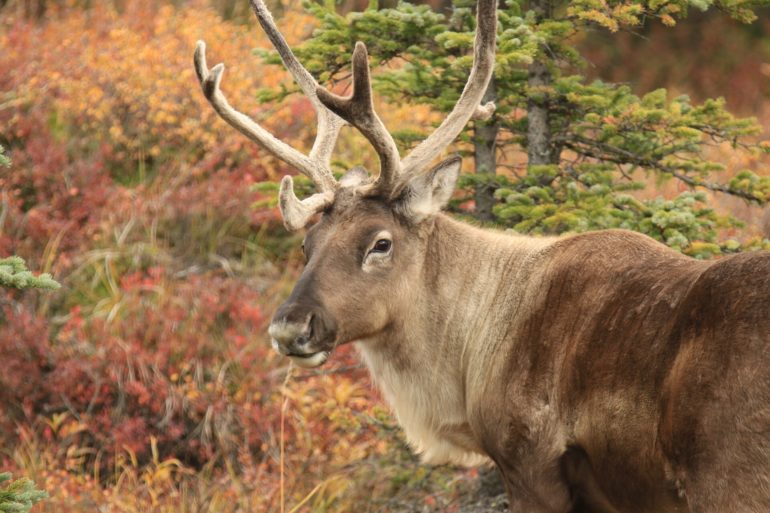 “Spruce budworms kill the forest, which then leads to a flush of vegetation of benefit to moose. More moose means more wolves, and caribou don’t do well when there’s a lot of wolves around,” said McLoughlin, an associate professor of biology in USask’s College of Arts and Science.

The paper published this week in the prestigious journal, PNAS (Proceedings of the National Academy of Sciences), says spruce budworm outbreaks recur about every 30 years, and has an effect similar to forest fires and human-caused disruptions such as logging, with the impact reverberating across the complex food chain.

Caribou, which subsist on a diet of lichen, mosses, and grasses, don’t compete directly for resources with moose, which thrive on deciduous vegetation. But new deciduous growth that results from the removal of the forest canopy bring moose to caribou habitat, attracting wolves that are the caribou’s primary cause of mortality through spillover predation.

In biology, the term “trophic cascade” refers to a disturbance at one level of an ecosystem that has an effect further down in the system. In this case, McLoughlin coined the term, “bouncing trophic cascade,” to describe the indirect impacts of spruce budworm.

“It’s never been shown before,” he said. “To have something so strong that you can have an insect generate a trophic cascade not only through its impact on vegetation but from its effect on vegetation, to then bounce up to affect moose to affect wolves to affect caribou.”

The researchers, led by McLoughlin’s long-time collaborator Dr. Daniel Fortin (Ph.D.) of Laval University, is the first to show how an insect and its activities can play an important role in how species such as moose, caribou and wolves interact. Other team members are Guillemette Labadie, a Ph.D. student at Laval, and Dr. Mark Hebblewhite (Ph.D.), an ungulate habitat ecologist at the University of Montana. The project was funded by the Natural Sciences and Engineering Research Council of Canada.

The study also showed that the impact on caribou was magnified by forestry companies establishing roads and trails for salvage logging—a common practice after fires, but also following such events as pine beetle infestations that killed vast numbers of trees in British Columbia and Alberta.

“Taking out dead trees is usually thought of as a benign activity, but what we showed here was that it’s definitely not benign for caribou. It magnifies the indirect moose-wolf-caribou interaction through disruption,” said McLoughlin.

He said researchers in Alberta and B.C. have established that in areas where roads and trails have been established for salvage logging, after pine beetle damage wolves use the trails to monitor their territory for prey, traverse the forests faster, and hunt more efficiently.

“It’s not just more wolves being out there supported by the growth in moose numbers, but it’s also about wolves having easier access to habitat in the caribou range.”

Provided by
University of Saskatchewan