A molecular shift register that can be controlled by external charges 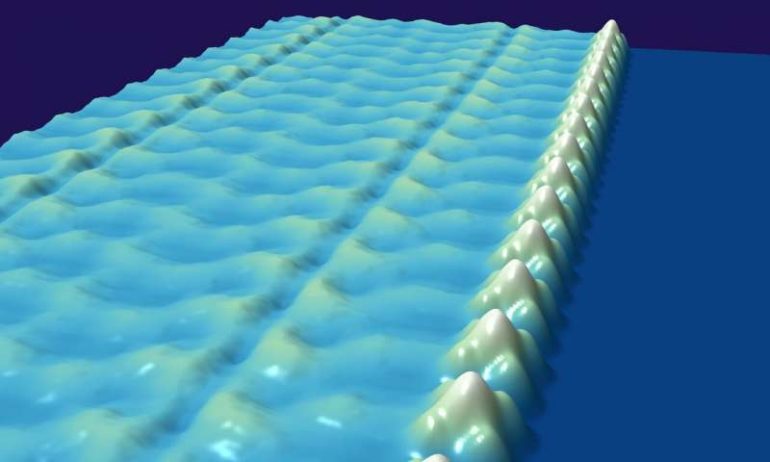 In recent years, electronics engineers have been trying to create molecular-scale electronics, new types of devices that use single molecules. In order for these devices to work, however, scientists first need to identify effective methods to tune the electronic properties of molecular arrays, which has so far proved to be fairly challenging.

Researchers at the Lawrence Berkeley National Laboratory and University of California- Berkeley (UC Berkeley) recently introduced a design strategy to tune the charge patterns of molecular arrays inside graphene field-effect transistors. In a paper published in Nature Electronics, they present a molecular shift register based on this strategy, which was fabricated by positioning organic molecules on graphene-based devices with a high level of precision.

“We were inspired by the possibility of making functional molecular nanostructures,” Michael F. Crommie, the professor who supervised the study, told TechXplore. “Our primary objective was to make nanomachines whose state can be easily controlled by external signals, such as an applied gate voltage. One way to build such functional nanostructures is to take advantage of molecular self-assembly to create an array of alternating charged/uncharged molecules, mimicking some aspects of how a shift register stores and manipulates information.”

The molecular shift register fabricated by Hsin-Zon Tsai and his colleagues was built by precisely positioning organic F4TCNQ molecules on graphene devices, using what is known as an “edge-templated” self-assembly process. Essentially, the device works by charging up molecules organized in an array, via an electrostatic back gate. At particular gate voltages, this enables the production of alternating charge patterns among the molecules (i.e., charging every other molecule within an array).

“We found that manipulating the end molecules causes the charge state of all the molecules to flip, resulting in a cascade down the entire array that shifts the whole charge pattern over by one molecule,” Tsai explained. “Our device is unique in that it is made out of organic molecules, whose features and functionality can be tailored by the sophisticated techniques of modern organic synthesis.”

The recent study by Tsai and his colleagues demonstrates how self-assembly processes and Coulomb interactions between charged molecular components can be utilized to create efficient nanostructures. The charge configurations of the molecular arrays they assembled can be switched between different charge states, simply by tuning the graphene Fermi level through a back-gate electrode.

“One could imagine how other fundamental electronic components, such as logic gates, could be constructed by self-assembly, using molecular charge states as logical bits,” Crommie said. “One challenge is to construct and align nanoscale readouts to access the molecular charge states. Although this is quite difficult at the nanoscale, we believe that self-assembly will again prove to be a useful tool for achieving this.”

In the future, the molecular system studied by this team of researchers could inform the creation of other electronic devices based on molecular nanostructures. Meanwhile, Tsai and his colleagues plan to conduct further studies aimed at creating larger and more sophisticated nanostructures that can perform more complex tasks, such as electro-mechanical nanomachines.

“One very interesting question about the nanoscale world is how force and momentum are transmitted from electrons, which are described by quantum mechanics, to larger objects such as atoms or molecules, that are more classical,” Franklin Liou, one of the researchers who carried out the project, said. “We plan to address this question by manipulating electrons in graphene through current or electrostatic gating and then measuring the resulting mechanical response of adsorbed atoms and molecules with atomic scale microscopy.”

Citation:
A molecular shift register that can be controlled by external charges (2020, November 6)
retrieved 7 November 2020
from https://techxplore.com/news/2020-11-molecular-shift-register-external.html