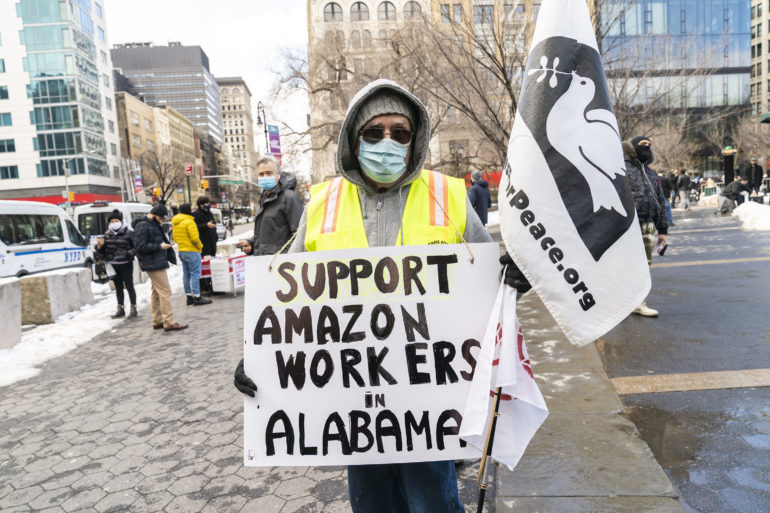 The National Labor Relations Board on Monday rejected Amazon’s request to install a video camera to keep an eye on boxes containing thousands of ballots key to a high-stakes union election in Alabama.

The closely-watched union election in Bessemer, Alabama, concluded on Monday. Approximately 5,800 workers at the facility in Bessemer were eligible to vote to join the Retail, Wholesale and Department Store Union (RWDSU). Vote counting begins at 11 a.m. ET on Tuesday, but the final tally may be days or weeks away, as Amazon and the RWDSU can contest ballots.

Amazon had sought to place a video camera in the NLRB’s Birmingham office, where votes will be tabulated, to keep an eye on the ballot boxes in the off hours between counting, according to an NLRB order denying Amazon’s request. The camera feed would have been accessible by both Amazon and the RWDSU.

“Though the mail ballot election in this matter is large, it is not, as the Employer asserts, of a ‘special nature,'” Lisa Henderson, acting regional director for the NLRB, said in the ruling. “The Region will conduct the ballot count within view of observers participating via virtual platform as well as in-person observers, and in accordance with Agency procedures and protocols, including those for securing ballot boxes.”

Representatives from Amazon didn’t immediately respond to a request for comment. An RWDSU spokesperson declined to comment.

Amazon had also requested the NLRB apply other enhanced security measures around the ballot boxes, seemingly to prevent issues like tampering.

The motion is just the latest example of how contentious the union election in Alabama has become. Amazon hasn’t faced a union drive this rigorous since 2014, when repair technicians at a Delaware warehouse failed to garner enough votes to form a union.

If successful, workers in Alabama would establish the first-ever labor union representation at a U.S. Amazon facility. The campaign has drawn support from onlookers in the U.S. and overseas, including President Joe Biden, who issued a highly valuable endorsement for the union drive earlier this month.

Amazon, which has staunchly opposed the union, previously sought to delay the Alabama union drive. It also failed to convince the NLRB to hold an in-person election, arguing that a mail-in ballot format risked depressing turnout and increased the potential for fraud.

Even though the seven-week mail-in voting period is complete, both Amazon and the RWDSU likely face a long road ahead in the campaign.

Counting will kick off Tuesday morning via a private video conference, presided over by the NLRB and with Amazon and the RWDSU allowed four observers each to monitor the count.

During this portion, the NLRB will read off each voter’s name and both sides will be allowed to contest ballots, likely based on factors such as whether an employee’s job title entitles them to vote or an illegible signature. Any contested ballots will be set aside.

Once this portion is complete, the NLRB will begin to count the unchallenged ballots in a public session open to members of the media. To win, the union needs to secure a simple majority of the votes cast at Amazon’s Bessemer warehouse, known as BHM1.