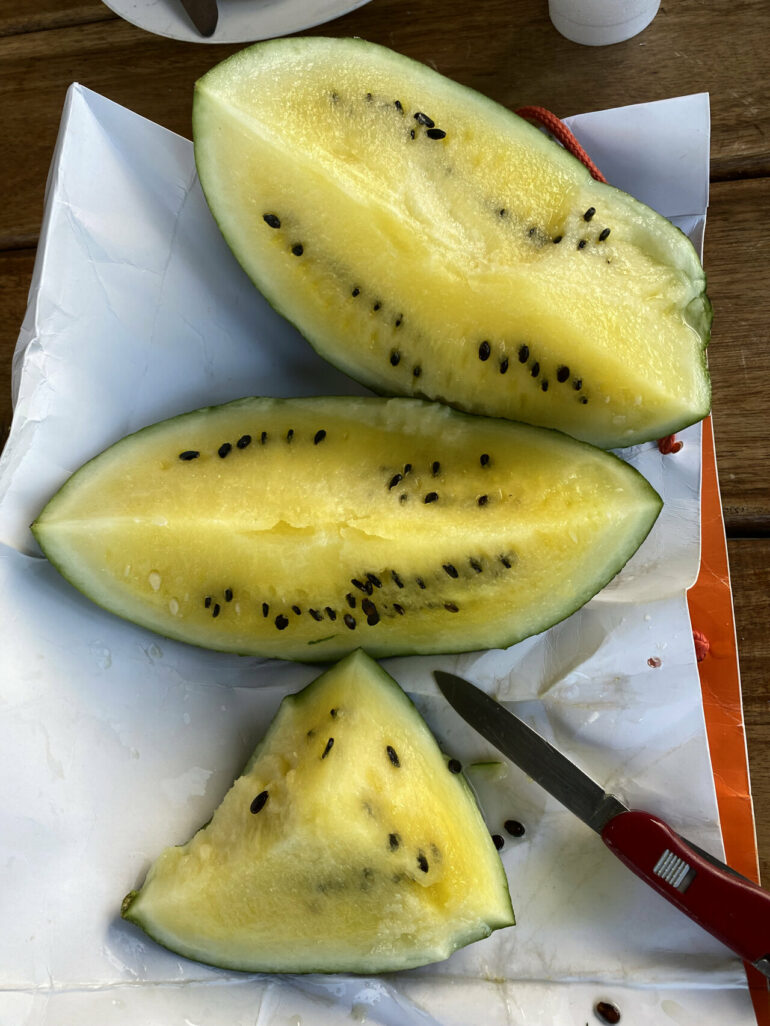 In a new paper published in the journal Molecular Biology and Evolution, scientists from the Royal Botanic Gardens, Kew and partners in the U.K., Germany and the U.S. have decoded the world’s oldest plant genome, using Neolithic-era watermelon seeds collected at an archaeological site in the Sahara Desert in Libya.

The study combined aspects of archaeological groundwork with cutting-edge genomics research to shed new light on the domestication of the watermelon and how our ancestors consumed the popular fruit’s ancient relatives. Surprisingly, evidence suggests the Neolithic Libyans had a taste for the watermelon’s seeds—a local delicacy still consumed today—but avoided the fruit’s bitter-tasting flesh.

It is estimated that more than 200 million tons of the domesticated watermelon (Citrullus lanatus) are produced globally every year, with the crop being among the top 10 most important in Central Asia. The red-fleshed fruit is generally accepted to have originated in Africa, where a close relative (C. lanatus subsp. cordophanus) was most likely first domesticated in the Nile Valley and what is modern-day North Sudan. But the discovery in the early 1990s of supposed watermelon seeds at the Neolithic site of Uan Muhuggiag in Libya continued to puzzle scientists.

To better understand the watermelon’s journey from wild plant to domesticated crop, the researchers collected and analyzed dozens of watermelon and watermelon relatives’ seeds from RBG Kew’s Herbarium collections. They also obtained and studied seed fossils from Libya and Sudan, radiocarbon dated (C-14) to more than 6,000 and 3,000 years ago, respectively.

Dr. Susanne S. Renner at Washington University in St. Louis, who together with Dr. Guillaume Chomicki at Sheffield University, led the study, said, “Seed morphology, especially of ancient seeds, was simply insufficient to reliably identify which species those Neolithic settlers in Libya were using.”

The scientists were able to solve the mystery when they analyzed the seeds’ genome and recovered long stretches across all chromosomes—possibly the oldest genome ever recorded in such detail from a plant whose age has been verified using radiocarbon dating analyses. They also sequenced the genomes of dozens of watermelon specimens in Kew’s Herbarium collections, some of which were first collected in the early 19th century.

The study’s findings indicate the Neolithic Libyans collected or even cultivated a bitter-tasting species of watermelon, instead of the sweet-tasting crop of today. This new insight was consistent with teeth marks found on some of the oldest seeds collected in Sudan by Dr. Philippa Ryan, a postdoctoral researcher at Kew and co-author of the study.

Prior to the analysis of the genome, the researchers were unable to distinguish the Libyan specimens from the other seven known species in the Citrullus genus. Their molecular results now show that the seeds came from a watermelon relative known as Egusi watermelons (Citrullus mucosospermus) from West Africa. These fruits are bitter and inedible when eaten raw due to the chemical cucurbitacin in their flesh and are instead harvested for their seeds, which are used in West African stews and soups, similar in size and flavor to pumpkin seeds.

Ryan said, “It’s a big surprise to find that instead of being an ancient watermelon, the Libyan seed was an entirely different domesticated Citrullus, whilst the pharaonic-period Sudanese seed had nuclear DNA from both the bitter Egusi, but also from the sweet watermelon. This suggests that by a later timeframe, an interesting mix of domesticated Citrullus varieties were grown along the Nile Valley for their seeds—alongside presumably the sweet watermelon.”

By better understanding the genetic makeup of these ancient fruits, the researchers hope to paint a clearer picture of the watermelon’s domestication. But the research has more far-reaching and modern implications as well. Charting out the exchange of genes through the millennia may help scientists pinpoint favorable genetic traits that bolster resilience to drought, disease and pests.

Dr. Oscar A Perez Escobar, Research Leader in Kew’s Integrated Monography Team and first author, said, “It is a remarkable achievement to have learned so much about the secret past life of these ancient seeds through their DNA. Without this genetic code, which we managed to obtain in great detail, we could not have discovered that a big portion of the DNA of these seeds is traceable to Egusi gourds (C. mucospermus) and not sweet watermelon. Another striking revelation delivered through their DNA is that these ancient seeds of Egusi watermelon likely hybridized and exchanged genes with sweet watermelons thousands of years ago, although it is still unknown to us the directionality of such gene flow.”

Antiviral strategy repurposes and misdirects how a virus assembles

The study was carried out in collaboration with Dr. Guillaume Chomicki at Sheffield University and Professor Susanne S. Renner at Washington University in St. Louis, as well as the Antonelli Lab research group, experts in evolutionary biology and biogeography.

Perez Escobar said, “Our study is a great example of what plant collections representing thousands of years of evolutionary and cultural history can do whenever they are used in multidisciplinary research. The data resources we generated and our discovery on the relationships that Egusi and sweet watermelons have sustained for millennia, involving the exchange of genes through generations, is of interest for sweet watermelon crop improvement programs whenever particular genes are sought, e.g., disease and pest resistance.”

More information:
Oscar A Pérez-Escobar et al, Genome Sequencing of up to 6,000-Year-Old Citrullus Seeds Reveals Use of a Bitter-Fleshed Species Prior to Watermelon Domestication, Molecular Biology and Evolution (2022). DOI: 10.1093/molbev/msac168