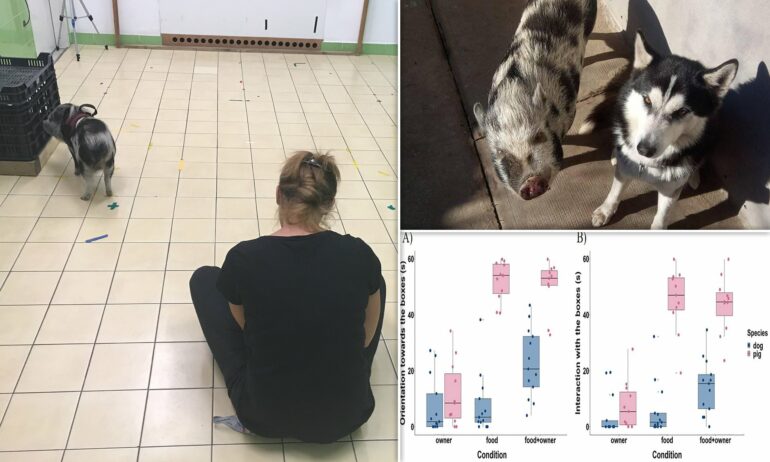 Researchers at the Eötvös Loránd University (ELTE) Department of Ethology, Budapest investigated if companion pigs and dogs would show their owners the location of a food reward that was out of their reach (but reachable for their owner). They found that if the owner was in the room, pigs paid her/him as much attention as dogs did. However, when the reward was also present in the room, only dogs tried to direct the attention of the owner to the reward location.

This suggests that directing humans’ attention to interesting locations may not be something that every domestic animal can do. Pigs might lack characteristics that are crucial for the emergence of this type of communication. The study is published in Scientific Reports.

Referential communication is the act of directing another’s attention to a specific entity in the environment. We, humans, often use referential communication through our language and our gestures when we, for example, point to a desired object. Whether animals can use similar behaviors to show us things of their interest has attracted significant research attention.

“However some human-socialized wild animals can do this as well, thus domestication might not be key for this communicative ability to emerge after all. We noticed that a shared characteristic among these species is that they use many visual signals when communicating with their conspecifics. Could this be a necessary characteristic for animals to engage in referential communication with humans?”

To test this hypothesis the researchers compared the behaviors of similarly raised companion animals from two domestic species: dogs, which rely heavily upon visual communication, and pigs, which do not. The pigs belong to the Family Pig Project, a long-term scientific project that allocates miniature pigs to human families where they are raised in a very similar manner to a family dog. This provides a unique opportunity to compare the two species’ human-oriented behaviors.

“We expected an increase of referential communicative behaviors when both the owner and the food reward were present, meaning that the animal was directing the attention of the human to the food location. We found that when pigs and dogs were alone with their owners, they paid similar attention to her/him. However, after the experimenter hid the reward, only dogs tried to show their owners where it was. Pigs, in contrast, just tried to find the way to take it themselves.”

This study shows that directing humans’ attention to interesting locations may not be something that every domestic animal can do. “We suggest that pigs might lack important characteristics that are crucial for the emergence of this sort of communication,” explains Pérez Fraga. “Although we know that dogs are especially skillful in communicating with humans, other animals like horses, cats, and even kangaroos can referentially communicate with us, and all of them rely heavily upon visual communication when interacting with their mates. Pigs, on the contrary, don’t.”