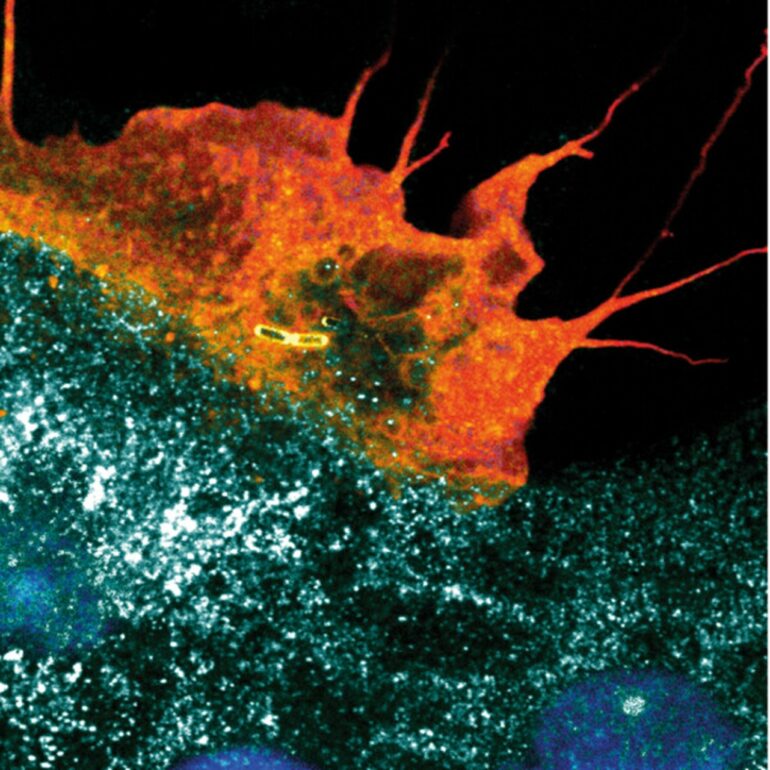 The immune system is under the constant challenge of specifically detecting dangerous microbes to remove them. Dr. Andrea Puhar and her team at The Laboratory for Molecular Infection Medicine Sweden (MIMS) at Umeå University, discovered that gut cells sense harmful bacteria through the mechanical force exerted on their cell surface during bacterial invasion. A protein called PIEZO1, which is able to sense mechanical signals, is necessary to detect invading bacteria. Activation of PIEZO1 during infection triggers a protective immune response. The study is now published in the scientific journal Cell Reports.

The immune system typically detects microbes through the chemical interaction of characteristic microbial molecules binding to dedicated cellular receptors. Activation of these receptors indicates the presence of specific types of microbes and regulates the immune response. A group of scientists at MIMS, which is based at Umeå University, Sweden, together with their collaborators, has now discovered that the detection of physical forces produced by bacterial infection can initiate the immune response.

Some harmful intestinal bacteria can breach the boundaries that separate the tissue from its surrounding environment. This initiates an inflammatory immune response that protects the body. During the invasion process, these trespassing microbes induce characteristic protrusions called ruffles on the surface of intestinal cells. The protrusions push against the cell surface, wrap around the bacteria and eventually take them up into the cell. These cellular movements produce mechanical force that results in changes in cell surface tension. The new study shows that cells sense these changes in surface tension as a signal for infection. The mechanical signal is detected by the action of a mechanosensor protein, PIEZO1.

“PIEZO1 is distributed all over the surface of intestinal cells like a net and functions as an alarm system that is activated at sites of bacterial invasion. Following PIEZO1 activation, infected cells send out alert signals that start the immune response. Our findings shine light on a new mode of sensing infection: while it was known before that cells have a ‘sense of smell’ to chemically detect infection, we now show that they also have a ‘sense of touch’ by physically detecting force changes,” says Andrea Puhar, lead author of the study.

In an earlier study, the authors discovered that intestinal epithelial cells secrete a molecule called ATP when they are infected with certain bacteria, such as the Gram-negative pathogens Shigella and Salmonella. Intestinal epithelial cells act as immune sentinels as they form a barrier to the gut lumen, where many beneficial microbes reside but at the same time harmful microbes start infection after ingestion. The authors showed that during bacterial infection extracellular ATP acts as a danger signal that causes acute intestinal inflammation, a protective immune response.

How ATP secretion starts during infection was not known. Using Shigella and the Gram-positive intestinal pathogen Listeria along with pharmacological and genetic manipulation, the authors now show that different types of bacteria are able to trigger ATP secretion, provided they are invasive, a trait restricted to some pathogens but not found in beneficial gut microbes. Furthermore, using sterile beads of bacterial size that are taken up by cells, they showed that imitating the process of ruffle formation and the mechanical stimuli occurring during bacterial entry is sufficient to trigger ATP secretion. They found that the inherently mechanosensitive plasma miccation channel PIEZO1, which is known to sense changes in lipid bilayer tension, is necessary to induce ATP secretion during bacterial invasion via Ca2+ influx and, in addition, induces protective gene expression programs.

“When I found that genetic inactivation of PIEZO1 abolished ATP secretion during bacterial invasion of intestinal epithelial cells, we had really strong proof that PIEZO1 was important to mechanically sensing infection and we were so excited. Then, using live-cell microscopy, my colleague Dorothee Langenbach, a postdoc in the team, showed that PIEZO1-dependent Ca2+ influx coincides with plasma membrane ruffle formation as bacteria are taken up into cells, and everything came together,” says Lalitha Tadala, Ph.D. student in the Puhar lab and first author of the paper.

“Mechanical sensing of bacterial invasion, one of the first steps of infection, allows early immune detection and triggers a superfast immune response, which provides a strong evolutionary advantage in the never-ending struggle between dangerous microbes and our immune system. This mode of immune detection makes it possible to specifically react to invasive pathogens but is not activated by the beneficial bacteria inhabiting the gut. It will be interesting to see whether other types of pathogens that induce similar mechanical changes during infection are detected by PIEZO1 and whether the pathway is dysregulated during inflammatory diseases. This will determine if in the future we can exploit it to treat infectious or inflammatory diseases,” adds Andrea Puhar.