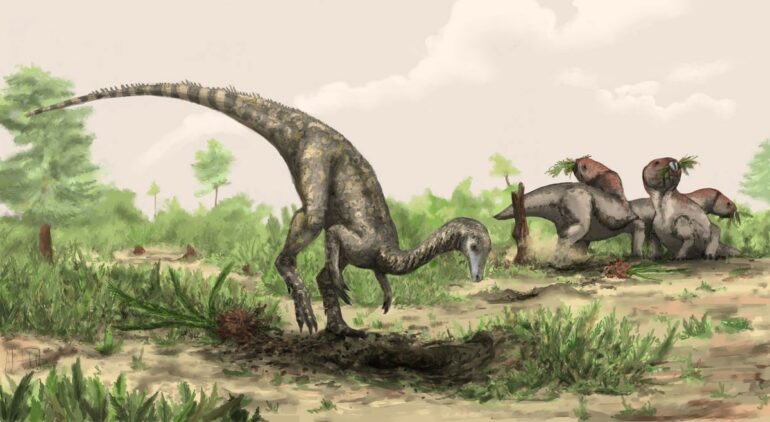 An international team of paleontologists led by Virginia Tech has discovered and named a new, early dinosaur. The skeleton—incredibly, mostly intact—was first found by a graduate student in the Virginia Tech Department of Geosciences and other paleontologists over the course of two digs, in 2017 and 2019.

The finding of this new sauropodomorph—a long-necked dinosaur—newly named Mbiresaurus raathi were published today in the journal Nature. The skeleton is, thus far, the oldest dinosaur skeleton ever found in Africa. The animal is estimated to have been 6 feet long with a long tail. It weighed anywhere from 20 to 65 pounds. The skeleton, missing only some of the hand and portions of the skull, was found in northern Zimbabwe.

“The discovery of Mbiresaurus raathi fills in a critical geographic gap in the fossil record of the oldest dinosaurs and shows the power of hypothesis-driven fieldwork for testing predictions about the ancient past,” said Christopher Griffin, who graduated in 2020 with a Ph.D. in geosciences from the Virginia Tech College of Science.

Griffin added, “These are Africa’s oldest-known definitive dinosaurs, roughly equivalent in age to the oldest dinosaurs found anywhere in the world. The oldest known dinosaurs—from roughly 230 million years ago, the Carnian Stage of the Late Triassic period—are extremely rare and have been recovered from only a few places worldwide, mainly northern Argentina, southern Brazil, and India.”

Sterling Nesbitt, associate professor of geosciences, also is an author on the study. “Early dinosaurs like Mbiresaurus raathi show that the early evolution of dinosaurs is still being written with each new find and the rise of dinosaurs was far more complicated than previously predicted,” he said.

The international team at the heart of this discovery include paleontologists from the National Museums and Monuments of Zimbabwe, the Natural History Museum of Zimbabwe, and Universidade de São Paulo, São Paulo, Brazil.

Found alongside Mbiresaurus were an assortment of Carnian-aged fossils, including a herrerasaurid dinosaur, early mammal relatives such as cynodonts, armored crocodylian relatives such as aetosaurs, and, in Griffin’s description, “bizarre, archaic reptiles” known as rhynchosaurs, again typically found in South America and India from this same time period.

(Mbiresaurus is derived from Shona and ancient Greek roots. “Mbire” is the name of the district where the animal was found and also is the name of an historic Shona dynasty that ruled the region. The name “raathi” is in honor of Michael Raath, a paleontologist who first reported fossils in northern Zimbabwe.)

From their findings, Mbiresaurus stood on two legs and its head was relatively small head like its dinosaur relatives. It sported small, serrated, triangle-shaped teeth, suggesting that it was an herbivore or potentially an omnivore.

“We never expected to find such a complete and well-preserved dinosaur skeleton,” said Griffin, now a post-doctorate researcher at Yale University. “When I found the femur of Mbiresaurus, I immediately recognized it as belonging to a dinosaur and I knew I was holding the oldest dinosaur ever found in Africa. When I kept digging and found the left hip bone right next to the left thigh bone, I had to stop and take a breath—I knew that a lot of the skeleton was probably there, still articulated together in life position.”

Nesbitt, who is a member of the Virginia Tech Global Change Center, part of the Fralin Life Sciences Institute, added, “Chris did an outstanding job figuring out a place to test his ideas about early dinosaur evolution, went there, found incredible fossils, and put it all together in a fantastic collaboration that he initiated.”

A theory on dinosaur dispersal

In addition to the discovery of Mbiresaurus, the group of researchers also have a new theory on dinosaur migration, including the when and where.

Africa, like all continents, was once part of the supercontinent called Pangea. The climate across Pangea is thought to have been divided into strong humid and arid latitudinal belts, with more temperate belts spanning higher latitudes and intense deserts across the lower tropics of Pangea. Scientists previously believed that these climate belts influenced and constrained animal distribution across Pangea, said Griffin.

“Because dinosaurs initially dispersed under this climatic pattern, the early dispersal of dinosaurs should therefore have been controlled by latitude,” Griffin said. “The oldest dinosaurs are known from roughly the same ancient latitudes along the southern temperate climate belt what was at the time, approximately 50 degrees south.”

Griffin and others from the Paleobiology and Geobiology Research Group at Virginia Tech purposefully targeted northern Zimbabwe as the country fell along this same climate belt, bridging a geographic gap between southern Brazil and India during the Late Triassic Age.

More so, these earliest dinosaurs were restricted by climatic bands to southern Pangea, and only later in their history dispersed worldwide. To bolster this claim, the research team developed a novel data method of testing this hypothesis of climatic dispersal barriers based on ancient geography and the dinosaurian family tree. The breakdown of these barriers, and a wave of northward dispersal, coincided with a period of intense worldwide humidity, or the Carnian Pluvial Event.

After this, barriers returned, mooring the now-worldwide dinosaurs in their distinct provinces across Pangea for the remainder of the Triassic Period, according to the team. “This two-pronged approach combines hypothesis-driven predictive fieldwork with statistical methods to independently support the hypothesis that the earliest dinosaurs were restricted by climate to just a few areas of the globe,” Griffin said.

Brenen Wynd, also a doctoral graduate of the Department of Geosciences, helped build the data model. “The early history of dinosaurs was a critical group for this kind of problem. Not only do we have a multitude of physical data from fossils, but also geochemical data that previously gave a really good idea of when major deserts were present,” he said. “This is the first time where those geochemical and fossil data have been supported using only evolutionary history and the relationships between different dinosaur species, which is very exciting.”

A boon for Zimbabwe and Virginia Tech paleontology

The unearthing of one of the earliest dinosaurs ever found—and most of it fully intact—is a major win for the Natural History Museum of Zimbabwe. “The discovery of the Mbiresaurus is an exciting and special find for Zimbabwe and the entire paleontological field,” said Michel Zondo, a curator and fossil preparer at the museum. “The fact that the Mbiresaurus skeleton is almost complete, makes it a perfect reference material for further finds. It is the first sauropodomorph find of its size from Zimbabwe, otherwise most of our sauropodomorph finds from here are usually of medium- to large-sized animals.”

Darlington Munyikwa, deputy executive director of the National Museums and Monuments of Zimbabwe, added, “The unfolding fossil assemblage from the Pebbly Arkose Formation in the Cabora Bassa Basin, which was hitherto known for paucity of animal fossils, is exciting. A number of fossil sites [are] waiting for future exploration were recorded, highlighting the potential of the area to add more valuable scientific material.”

Much of the Mbiresaurus specimen is being kept in Virginia Tech’s Derring Hall as the skeleton is cleaned and studied. All of the Mbiresaurus skeleton and the additional found fossils will be permanently kept at Natural History Museum of Zimbabwe in Bulawayo, Zimbabwe.

“This is such an exciting and important dinosaur find for Zimbabwe, and we have been watching the scientific process unfold with great pride,” said Moira Fitzpatrick, the museum’s director. She was not involved in the study. “It has been a pleasure to work with Dr. Griffin,and we hope the relationship will continue well into the future.”

The discovery of Mbiresaurus also marks another highpoint for the Paleobiology and Geobiology Research Group. In 2019, Nesbitt authored a paper detailing the newly named tyrannosauroid dinosaur Suskityrannus hazelae. Incredibly, Nesbitt discovered the fossil at age 16 as a high school student participating in a dig expedition in New Mexico in 1998.

“Our group seeks out equal partnerships and collaborations all over the world and this project demonstrates a highly successful and valued collaboration,” Nesbitt said. “We will continue studying the many fossils from the same areas as where the new dinosaur came from and explore the fossil beds further.”