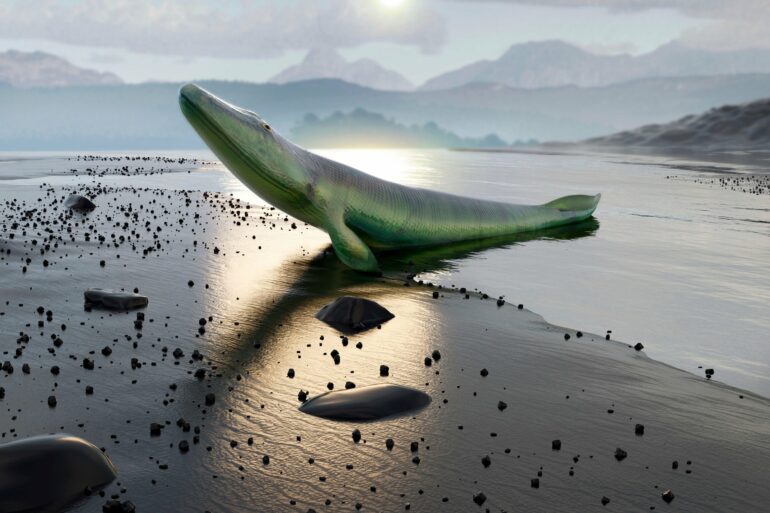 The skulls of tetrapods had fewer bones than extinct and living fish, limiting their evolution for millions of years, according to a latest study.

By analyzing fossil skulls of animals across the transition from an aquatic to terrestrial environment, researchers from the University of Bristol, Barcelona’s Universitat Pompeu Fabra and University College London discovered that tetrapods had more complex connections between their skull bones than fish. And, rather than promoting the diversification of life on land, these changes to skull anatomy actually restricted the evolution of tetrapod skulls.

Tetrapods evolved from fish and were the earliest land animals with limbs and digits; the ancestors of everything from amphibians to humans.

The research, published this week in Science Advances, quantified the organization of skull bones in more than 100 living and fossil animals to better understand how skulls changed as tetrapods evolved.

Lead author James Rawson of Bristol’s School of Earth Sciences said, “Tetrapod skulls generally have fewer skull bones than their fish ancestors, but simply counting the number of bones misses some important data. We used a technique called network analysis, where the arrangement of skull bones—which bones connect to which—is recorded in addition to bone number.”

Author Dr. Borja Esteve-Altava, an expert in this technique, said, “Traditionally, anatomy research has been mostly descriptive or qualitative. Network analysis provides a sound mathematical framework to quantify anatomical relations among bones: a kind of data often overlooked in most studies on morphological evolution.”

The authors found that tetrapods having fewer skull bones than fish made the organization of their skulls more complex.

Mr. Rawson added, “It might seem strange, but having fewer bones means each of those bones must connect with more of its neighbors, resulting in a more complex arrangement. Modern frogs and salamanders had the most complex skulls of all the animals we studied.” The skulls of the earliest tetrapods also became more consolidated into a single unit, whereas their fish ancestors had skulls made of several distinct sections.

By looking at the variety of skull bone arrangements over time, the authors also discovered that the origin of tetrapods coincides with a drop in the variety of skull bone arrangements. Professor Emily Rayfield, senior author of the study, said, “We were surprised to find these changes to the skull seemed to limit tetrapod evolution, rather than promoting radiation to new habitats on land. We think that the evolution of a neck, extinction events or a bottleneck in skull development may be responsible.”

Mr. Rawson concluded, “We also see a similar drop in structural variability for the limb bones in early tetrapods, but the drop in the limbs happens 10 million years earlier. It seems that different factors were affecting skull and limb evolution in early tetrapods, and we have so much more to learn about this crucial time in our own evolutionary history.”

Farm vehicles are now heavier than most dinosaurs: Why that’s a problem