Examining the effect of temperature on animals’ reproductive strategies 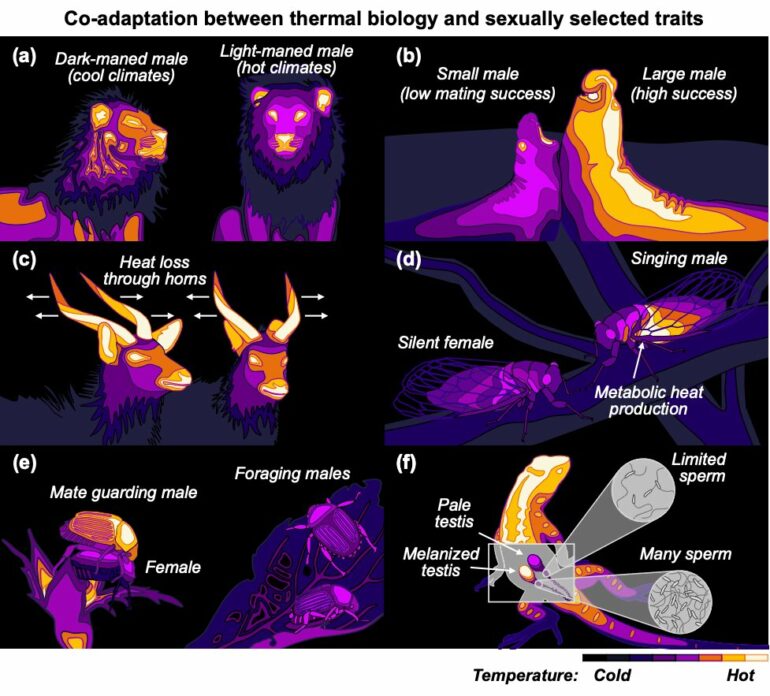 Temperature affects nearly every part of an animal’s day-to-day existence. Biologists have, for good reason, spent a huge amount of time trying to understand how animals can survive in the climates in which they live. They have learned a lot about the strategies that animals use to keep themselves from overheating or freezing to death.

But beyond survival, how does temperature affect the birds and the bees, and all of the other animals? Writing in the journal Ecology Letters, Michael Moore, a postdoctoral fellow with the Living Earth Collaborative at Washington University in St. Louis, and his collaborators Noah Leith and Kasey Fowler-Finn at Saint Louis University (SLU) examined the state of research into these interactions and propose new ways for how to study them.

Their new paper considers the myriad ways that thermal biology co-adapts with the traits favored by sexual selection, including things like courtship displays, ornamental coloration and enlarged weapons like horns or claws.

“Now that we’ve studied a huge number of traits that animals have evolved in order to survive the temperatures they face, we’re starting to realize that these traits also have consequences for where and how animals reproduce,” said WashU’s Moore, a biologist in Arts & Sciences. “But as we thought about the ways in which an animal’s thermal traits influence how it tries to attract mates, we also couldn’t shake the feeling that this was a very survival-centric view of the adaptation.”

“It supposes that the ways that animals reproduce in their climate is entirely beholden to how they’ve evolved in order to survive in that climate,” he said. “However, we know from decades of behavioral ecology research that animals will often put themselves at risk of getting eaten or parasitized if it means they could potentially attract a mate. We were curious then why the threat of overheating should be any different.”

Turns out it’s not: Animals will often put their lives on the line for reproduction, even if it comes at the cost of being the wrong temperature. Because this risky strategy can sometimes pay off and lead to greater offspring production over the long run, the researchers found widespread evidence that animals have also evolved mechanisms that allow them to tolerate the perilous temperatures they only encounter during mating.

And the stakes have never been higher.

“There is an urgent need for biologists and conservationists to understand if and how organisms are adapting to climate change,” said Leith, a Ph.D. candidate at SLU and first author of the new study.

“Survival and reproduction are both clearly obviously important for populations to persist in changing climates, but the adaptations that enhance each component of fitness may often be more closely linked than we realize,” he said. “Studying the correlated evolution of sexual and thermal traits could alter our predictions for which populations are most vulnerable to climate change.”

Future research in this area also could reveal the pathways that organisms might take as they adapt to a warming world, the scientists said.

If increased heat tolerances have evolved in some populations to accommodate the heat absorbed or retained by a trait used for mating, those populations may have advantages that give them a leg up on adaptation to warming temperatures.

“In some cases, sexual traits are even directly beneficial for dissipating heat, like antelope horns and fiddler crab claws,” Leith said. “Sexual selection on horns or claws may therefore work in concert with natural selection and accelerate adaptation to warmer temperatures. Beyond increasing reproductive success in altered climates, there are a variety of unexplored ways that sexual selection can directly enhance an organism’s non-mating performance during climate change.”

SLU’s Fowler-Finn, associate professor of biology, agrees. Among the many questions and approaches for testing the interplay between thermal ecology and sexual selection raised by this research, she thinks scale is particularly significant.

“How thermal microhabitats differ between organisms varying in size is a super important question that I hope more folks tackle,” she said. “We often generate predictions for the effects of global warming based on air temperatures, which differ significantly from surface temperatures on the ground and vegetation. We will not be able to truly understand the impact of global warming without considering scale.”

The consequences of global warming for sexual communication and other reproductive processes are vastly understudied, Fowler-Finn said. Recent research from her own laboratory has shown that at hotter temperatures, male treehopper insects sing at higher frequencies, and female preferences track these changes. This phenomenon (called temperature coupling) facilitates the coordination of mating across temperatures.

Looking ahead, Moore said he is most excited about what he has learned about how animals have evolved a variety of strategies that allow them to mate at the seemingly wrong temperature.

“What’s really novel about our work,” he said, “is that we show that reproduction can sometimes actually be the leading reason for many of the adaptations that animals have for dealing with their local climate.”