Focus on organic transistors for health sensors within living organisms 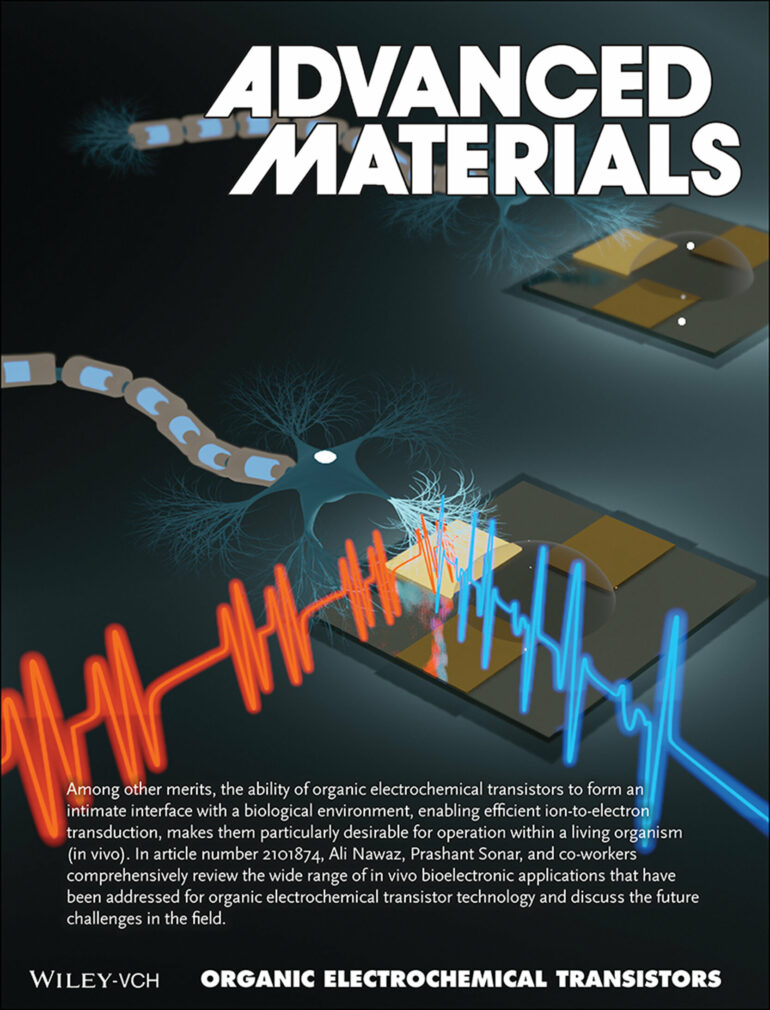 QUT researchers are part of an international group who have explored ways in which organic transistors are being developed for use as wearable health sensors.

The currently available bioelectronic devices, such as pacemakers, that can be embedded with the human body are mostly based on rigid components

However, the next-generation devices—which are researched and developed by bioelectronic engineers, organic chemists, and materials scientists—will use soft organic materials that allow comfortable wearability as well as efficient monitoring of health.

In a study published and featured on the cover of the journal, Advanced Materials, Dr. Ali Nawaz, from the Bruno Kessler Foundation, Trento, Italy, and QUT Centre for Materials Science researchers Professor Prashant Sonar, Professor Kathryn Fairfull-Smith, and Dr. Qian Liu have reviewed the potential of organic electrochemical transistors in in vivo bioelectronic devices, which are devices suitable to be used within a living organism.

The research was supported by the QUT Centre for Biomedical Technologies.

First author Dr. Ali Nawaz examined the characteristics of organic electrochemical transistors that make them particularly suitable to be operated within a living organism.

“In doing so, we demonstrate their great potential to expand the horizons of the bioelectronics industry, and highlight their role in a wide range of applications, including electrophysiology, neuron stimulation and neurotransmitter detection, wearable and implantable applications, and regulation of plant processes,” Dr. Ali Nawaz said.

Professor Sonar, who leads the research team, has previously developed carbon-based organic electrochemical transistors in research that appeared on the cover of Advanced Electronic Materials.

Professor Sonar said such soft organic transistors would revolutionize the future technology as it would be possible to implant them within a living body and monitor the health of human beings, animals, and even plants.

“Much of the work at this stage concerns the development of the fundamental science of suitable organic materials,” Professor Sonar said.

“But the aim, in the next decade or so, is to have transistors mounted on flexible plastic that can be implanted in the body and be monitored externally, such as through a Bluetooth connection.

“There are other challenges that are currently the focus of further research, such as ways of powering these devices, perhaps through wireless charging or through the movement of a person.

“Much work needs to be done before this technology becomes ubiquitous. But our review of the research so far shows that a strong foundation has already been laid in this field.

“In the future, the application of organic electrochemical transistors could bring real innovations, in areas such as implantable medical devices that provide constant health monitoring and advanced agricultural practices such as reducing agriculture-related water consumption.”