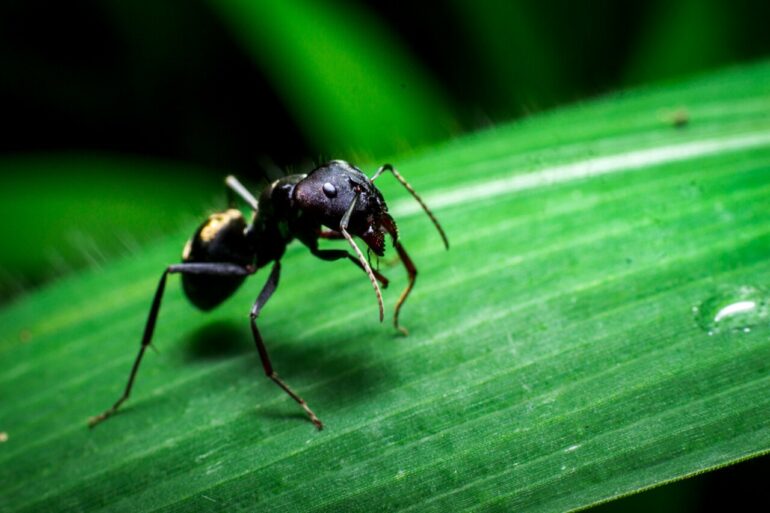 Most ants dexterously grasp and snip their food with a pair of chopstick-like mandibles. But trap-jaw ants are also capable of crashing their jaws together at blisteringly fast speeds, striking victims in 0.77 μs. Yet, unleashing such ballistic blows poses a risk. Animals that harness stored elastic energy like a catapult to hurl limbs at great speed—think leaping grasshoppers—are also in danger of tearing themselves apart if the limbs are not perfectly aligned. And few succeed in harnessing such power in limbs while being capable of deft manipulation. However, trap-jaw ants (Odontomachus brunneus) manage both maneuvers, in addition to raining down blows repeatedly without damaging themselves.

Puzzled by the apparent paradox, Sheila Patek, from Duke University, U.S., with colleagues from U.S. and U.K. institutions triggered trap-jaw ants to unleash their powerful mandibles. They published their discovery in the Journal of Experimental Biology that the ants simultaneously push and pull the mandibles using energy stored in a head tendon and their exoskeleton to drive the jaws in a perfect self-preserving arc, allowing them to repeatedly lock and load without coming to harm.

To reveal the ballistic ant’s secret for avoiding self-destruction, Chi-Yun Kuo (Duke University), gently secured ants in front of a high-speed camera filming at 300,000 frames/s to capture the lightning-fast maneuver as the insects crashed their mandibles together.

“When we played back the videos in slow-motion, their strikes were spectacularly precise,” says Patek. Immediately after release, the mandibles rotated in a perfect arc through the first 65 degrees as they clashed together, reaching a top rotation speed of 470,000 rpm, while the tips of the 1.38 mm long structures sliced through the air at speeds averaging 54.4m/s, before beginning to decelerate and finally bobbing to and fro at the end of a bite.

In addition, the head compressed, shortening by 64 μm (3.2%) while being squeezed inward by 41 μm (6%). “We realized that the entire head was deforming to store elastic potential energy,” says Patek. So how were the ants using this stored energy to close their mouthparts at such incredible speeds?

Calculating the amount of energy released as the insects unleashed their smashing mandibles, the team discovered that the energy stored as the head exoskeleton deformed was sufficient to drive the mandibles through 33 degrees of perfect rotation, while energy stored in the springy tendon attaching the mandible to the enormous adductor muscle inside the head (comprising 14% of the ant’s body mass) powered the remaining 32 degrees.

Wondering how the massive adductor muscle could power the mandibles’ perfectly circular trajectories, Patek, Adam Summers (University of Washington, U.S.), Gregory Sutton (University of Lincoln, U.K.) and Ryan St Pierre (University at Buffalo, U.S.), realized that the muscle could simultaneously stretch the tendon linking the muscle to the internal end of the mandible, while also deforming the head exoskeleton, storing energy in both structures while the mandible was latched horizontally in position, waiting to be fired.

Then, as soon as the latch holding the mandible in place was released, the energy stored in the stretched springy tendon pulled the internal end of the mandible backward, while the deformed exoskeleton sprang back into shape—simultaneously pushing the mandible forward—sweeping it in a perfect arc. And when St Pierre and Sutton tested the theory, their computer simulation reproduced the mandible’s trajectory seamlessly.

Trap-jaw ants have found a mechanism that allows them to coordinate the opposing forces driving the perfect mandible rotation, placing no strain on the fragile joint about which the mandible pivots to avoid damage, regardless of how often the ant strikes. Patek suspects that other spring-loaded creatures also use the strategy, and she, Sarah Bergbreiter (Carnegie Mellon University, U.S.) and Suzanne Cox (Duke University) suggest that the revolutionary design could be embraced by engineers. “The principles can be incorporated into microrobotics to improve multifunctionality, precision and longevity of ultrafast systems,” they say.

The case for speaking politely to animals

Provided by
The Company of Biologists