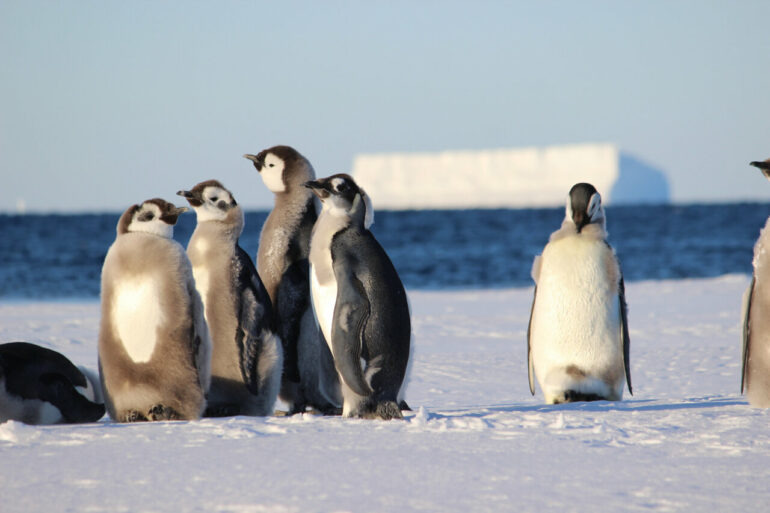 Scientists at the Woods Hole Oceanographic Institution (WHOI) and European research institutions are calling for better protections for juvenile emperor penguins, as the U.S. Fish and Wildlife Service considers listing the species under the Endangered Species Act and the Commission for the Conservation of Antarctic Marine Living Resources (CCAMLR) considers expanding the network of Marine Protected Areas (MPAs) in the Southern Ocean.

In one of the few long-term studies of juvenile emperor penguins—and the only study focused on a colony on the Weddell Sea—research published today in Royal Society Open Science found that the young birds spend about 90 percent of their time outside of current and proposed MPAs. The study, which tracked eight penguins with satellite tags over a year, also found that they commonly traveled over 1,200 kilometers (745 miles) beyond the species range defined by the International Union for Conservation of Nature (IUCN), which is based on studies of adult emperor penguins from a few other colonies.

Considered immature until about 4 years of age, juvenile emperor penguins are more vulnerable than adults because they have not fully developed foraging and predator avoidance skills. As climate change reduces sea-ice habitat and opens up new areas of the Southern Ocean to commercial fishing, the researchers conclude that greatly expanded MPAs are crucial to protect this iconic, yet threatened, penguin species at every life stage.

“While everyone is looking at the adult population, the juvenile population—which leaves the relative safety of its parents at about five months—is neither monitored nor protected,” said Dan Zitterbart, a WHOI associate scientist. “The current and proposed MPAs in the Southern Ocean only include the range of adult emperor penguins, which do not travel as far as juveniles. From a conservation perspective, it’s important to know where these juveniles go. It’s one more piece of the puzzle to protect their marine habitat.”

“Emperor penguins have such low fecundity, if you do not protect juveniles, they may not ever become breeding adults,” he continued.

Zitterbart and colleagues at the Centre Scientifique de Monaco (CSM), Centre National de la Recherche Scientifique (CNRS) and Université de Strasbourg in France, and the Alfred-Wegener Institute (AWI) in Germany are conducting a long-term monitoring study of the Atka Bay emperor penguin colony near Neumayer Station III, on the Weddell Sea. The Weddell Sea area is home to one-third of established emperor penguin colonies, and research shows that colonies in the region, including the Ross Sea, are less vulnerable to climate-induced melting than other areas of the Antarctic.

“Some of the Weddell Sea colonies are expected to still be present 50 to 100 years from now,” said Aymeric Houstin, a WHOI post-doctoral investigator and the lead author of the study. “It’s important to preserve colonies that will be able to endure climate change, as they could become a refuge for the entire population of emperor penguins.”

According to studies, 12 percent of the area under CCAMLR jurisdiction is currently protected as an MPA, and less than 5 percent is considered a “no-take” area. For several years, the 26 members of CCAMLR have been considering three new MPAs in the region, including the Weddell Sea MPA, first developed by Germany, and submitted by the European Union in 2013. While this MPA would cover an area of 2.2 million square kilometers (0.85 million square miles), preserving one of the most pristine ecosystems in the world and a critical zone for global ocean circulation, the authors say that the boundaries are inadequate to protect juvenile emperor penguins.

“The Weddell Sea MPA design, as the other MPAs around Antarctica, should include the distribution at sea of all age-classes of the emperor penguin population—not only the adults from a few study colonies,” said Céline Le Bohec, of CNRS/Université de Strasbourg France and the Centre Scientifique de Monaco. “Juveniles are currently clearly lacking protection and their presence in the Northern waters needs to be considered in the future, especially regarding the development of fisheries in those regions.”

Over the next decades, the researchers plan to continue tagging both adult and juvenile penguins from the Atka Bay colony to track their movements and behavior as the environment changes. With more long-term data, Houstin suggests that a “dynamic MPA” could be developed with shifting boundaries, based on predictions of penguins’ movements throughout the year.

“This notion of a dynamic network of MPAs is really essential,” Le Bohec said. “It’s certainly the way to continue the dialogue with the fishing industry to ensure the resource is used in a sustainable manner, to ultimately preserve the unique biodiversity of these sensitive polar regions.”