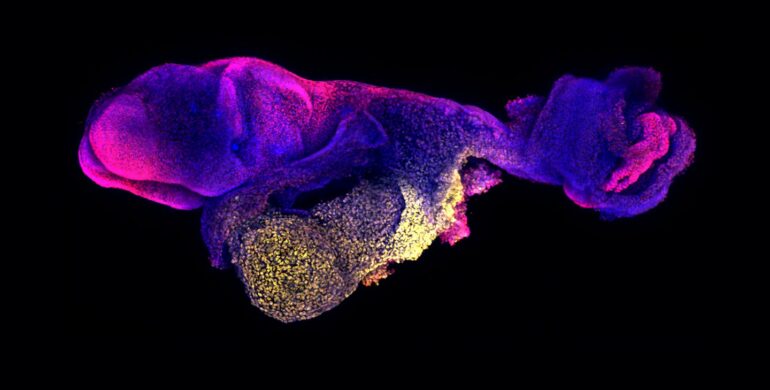 Just two weeks after announcing the development of a mouse embryo model, complete with beating hearts and the foundations for a brain and other organs, from mouse stem cells, researchers in the laboratory of Magdalena Zernicka-Goetz, Bren Professor of Biology and Biological Engineering, have published new findings about another mouse embryo model reaching similar developmental stages, but created out of only mouse embryonic stem cells. This modification has simplified the protocol and makes the embryo model easier to be adopted in other laboratories.

The new study appears in the journal Cell Stem Cell on September 8. The research was led by graduate students Kasey Lau and Hernan Rubinstein of the University of Cambridge and the Weizmann Institute of Science, respectively.

“This discovery opens up new avenues for understanding why the great majority of human pregnancies are lost and to create knowledge that will prevent this from happening,” says Zernicka-Goetz, who is also a professor of mammalian development and stem cell biology at Cambridge University in the Department of Physiology, Development and Neuroscience. “This knowledge will also let us, with time, repair tissues and organs much more effectively than we can do now.”

“As we develop these models further, we will learn more about the signals that initiate and guide the development of organs, which will give us routes for helping to generate organs in culture that will ultimately find application in transplant surgery or in regenerative medicine,” she explains.

In a paper published in the journal Nature on August 25, the team detailed how to develop a mouse embryo model out of mouse embryonic and extraembryonic stem cells. Instead of creating mouse embryos by the natural biological method of combining egg and sperm, the team guided three populations of cultured stem cells to interact, inducing the expression of certain genes and establishing an environment for the cells to “talk” to each other. As a result, the stem cells self-organized into structures that then progressed through successive developmental stages until the mouse embryo model had beating hearts and the foundations for a brain and all other organs, in addition to the yolk sac and which facilitate gas and nutrient exchange between the embryo and the mother. This is the most advanced stage of development achieved to date in a stem cell–derived model.

Naturally, in the first few days after fertilization, three major types of tissues develop in the early mouse embryo: one will eventually become the tissues of the body, and the other two will support the embryo’s development. One of these latter two types, known as the trophectoderm, will become the placenta, which connects the fetus to the mother and provides oxygen and nutrients. The other, known as primitive endoderm, will give rise to the yolk sac, where the embryo grows and from which it receives nutrients in early development.

Three types of stem cells can be derived from each of these three tissues from the mouse embryo and cultured indefinitely in the laboratory.

Building off of the previous research, the mouse embryo model reported in the new paper are only made of a single type of cultured stem cell: the embryonic stem cells (ESCs). Untreated ESCs become the body of the embryo. Another ESC line is coaxed by researchers to become like extraembryonic endoderm stem cells, which provide one set of developmental signals. The team also drives a third ESC line to become like trophoblast stem cells, which provide a second set of developmental signals. Thus, the team is able to reconstitute the three major tissues of the developing mouse embryo by starting with only ESCs. This has simplified the protocol while still preserving the important signaling events between the three tissues, which are critical to building the body plan of the embryo.

“Of the three stem cell types, only the ESCs are pluripotent—that is to say, only the ESCs have the potential to develop into any tissue of the body,” explains Zernicka-Goetz. “But to do this, they require the other two types of extra-embryonic stem cell. ESCs can be directed to become these other two extra-embryonic cell types. In this way, we end up with three starting cell types all generated from the single ESC line.”