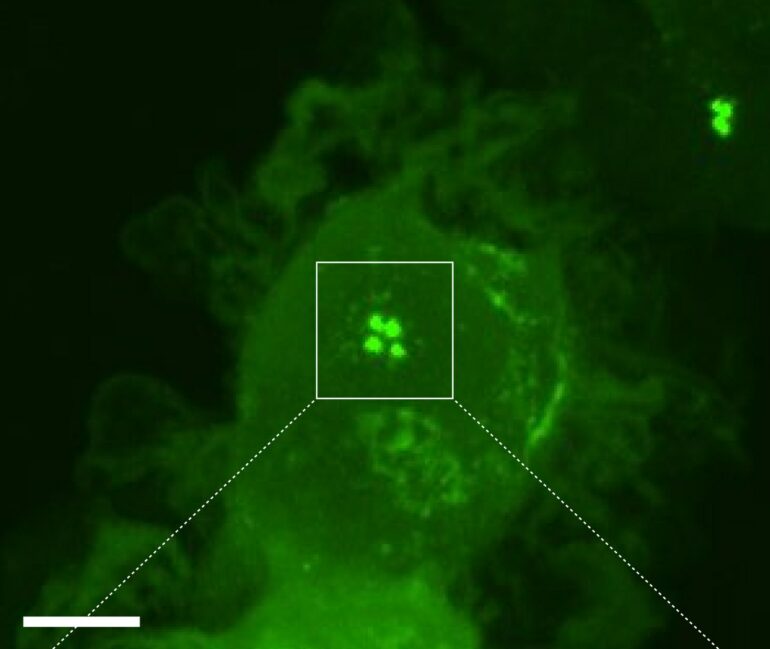 Cancer cells use an unusual mechanism to migrate into new tissue and form metastases there. The same process probably also keeps some immune cells on their toes. This is the result of a recent study led by the University of Bonn.

According to the study, certain structures, the centrioles, increase in number. This makes it easier for them to maintain their direction and thus migrate more quickly to the lymph nodes, where they activate other immune cells. The results have now been published in the Journal of Cell Biology.

Like the police, the immune system relies on division of labor. First of all, there are the dendritic cells. They search the tissue around the clock for traces of suspicious intruders, called antigens. If they are successful, they rush to the lymphatic vessels and from there to the draining lymph nodes. There they present their findings to a powerful search team, the T cells. These endogenous troops now know which enemy to fight.

This attack must take place before the invaders cause major damage or multiply too much. It is therefore important that dendritic cells migrate as quickly as possible to the briefing in the lymph node. “We have discovered a mechanism that helps them doing this,” explains Prof. Dr. Eva Kiermaier from the LIMES Institute (Life and Medical Sciences) at the University of Bonn. “To do so, they form more of certain structures called centrosomes. These help them maintain their direction for longer and thus reach the lymphatic vessels more quickly.”

Centrosomes belong to the organelles—these are molecular complexes that are responsible for specific tasks in cells, much like the organs in the body. Normally, there is exactly one centrosome in each human cell. Shortly before cell division, it doubles. The two copies migrate to opposite poles of the cell and stretch a bundle of fibers between them, the microtubules.

With them, they pull the chromosomes (which have also doubled) apart during division. Each of the resulting daughter cells thus receives a complete set of genetic material as well as one of the two centrosomes.

“However, centrosomes are also responsible for organizing the cytoskeleton during cell migration,” says Kiermaier, who was brought to the Rhine from Lower Austria (IST Austria, Klosterneuburg) in 2017 through the returnee program of the state of North Rhine-Westphalia. “By this we mean fiber-like structural proteins that give the cell its shape and provide it with stability.”

The cytoskeleton also decides where “front” and “back” are in a cell. And that, in turn, affects its direction of movement. “We have now been able to show that dendritic cells form multiple centrosomes as soon as they come into contact with an antigen,” says Ann-Kathrin Weier. The Ph.D. student at the LIMES Institute shares first authorship of the publication with her colleague Mirka Homrich. Both performed important parts of the experiments.

Staying the course longer to reach the destination more quickly

Dendritic cells have a problem: they do not know where the next lymphatic vessel is via which they can reach the lymph node. In their search, they proceed according to the strategy of “trial and error”: they run in one direction for a short while and then change it if they have not encountered a vessel in the process.

“The more centrosomes they have, the longer they stay on course before continuing to search in a different direction,” says Mirka Homrich. “We were able to show in computer simulations that this allows them to find the lymphatic vessels much faster than they normally would.” In the process, the proliferation of centrosomes adjusts their staying power just right—so they don’t stick too stubbornly to their direction. This would increase the risk of them going astray and getting completely lost.

The mechanism identified in the study was previously completely unknown in healthy cells. Cancer cells were assumed to use it to form metastases. However, the multiplied centrosomes must not be freely distributed inside the cells. Otherwise, they would severely disrupt functions such as cell division. In both tumor and dendritic cells, the organelles therefore congregate at a single site—they cluster.

What can plants learn from algae?

“There are now agents that disrupt this clustering of centrosomes,” says Kiermaier, who is also a member of the ImmunoSensation2 Cluster of Excellence and the Transdisciplinary Research Area “Life and Health” at the University of Bonn. “As a result, the cancer cells can no longer divide correctly, but die.”

However, it is also possible that these substances interfere with the immune system—after all, the centrosomes cluster there as well. “We’ve tested several of these agents in cell cultures,” she says. “We’ve actually found evidence that they could significantly impair the effectiveness of the immune defense.” If that will be confirmed in clinical trials, it would be bad news as there could be considerable side effects if the active substances were used in cancer therapy.