Orangutans instinctively use hammers to strike and sharp stones to cut 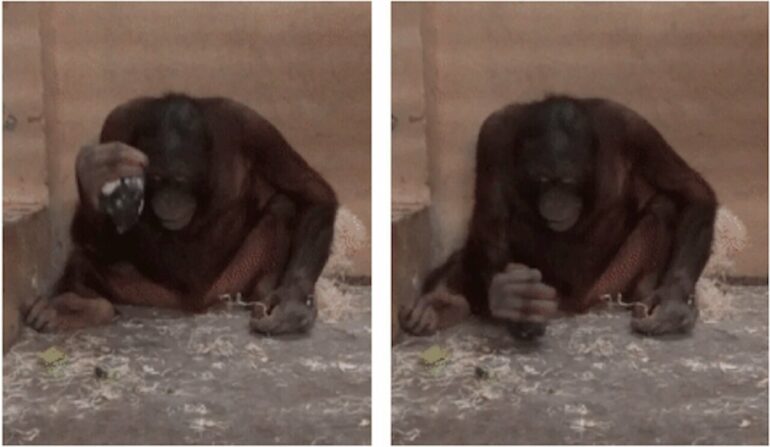 Untrained, captive orangutans can complete two major steps in the sequence of stone tool use: striking rocks together and cutting using a sharp stone, according to a study by Alba Motes-Rodrigo at the University of Tübingen in Germany and colleagues, publishing February 16 in the open-access journal PLOS ONE.

The researchers tested tool making and use in two captive male orangutans (Pongo pygmaeus) at Kristiansand Zoo in Norway. Neither had previously been trained or exposed to demonstrations of the target behaviors. Each orangutan was provided with a concrete hammer, a prepared stone core, and two baited puzzle boxes requiring them to cut through a rope or a silicon skin in order to access a food reward. Both orangutans spontaneously hit the hammer against the walls and floor of their enclosure, but neither directed strikes towards the stone core. In a second experiment, the orangutans were also given a human-made sharp flint flake, which one orangutan used to cut the silicon skin, solving the puzzle. This is the first demonstration of cutting behavior in untrained, unenculturated orangutans.

To then investigate whether apes could learn the remaining steps from observing others, the researchers demonstrated how to strike the core to create a flint flake to three female orangutans at Twycross Zoo in the UK. After these demonstrations, one female went on to use the hammer to hit the core, directing the blows towards the edge as demonstrated.

This study is the first to report spontaneous stone tool use without close direction in orangutans that have not been enculturated by humans. The authors say their observations suggest that two major prerequisites for the emergence of stone tool use—striking with stone hammers and recognizing sharp stones as cutting tools—may have existed in our last common ancestor with orangutans, 13 million years ago.

The authors add: “Our study is the first to report that untrained orangutans can spontaneously use sharp stones as cutting tools. We also found that they readily engage in lithic percussion and that this activity occasionally leads to the detachment of sharp stone pieces.”


Citation:
Orangutans instinctively use hammers to strike and sharp stones to cut (2022, February 16)