Rewriting the textbook on gene regulation: It’s the big picture that counts 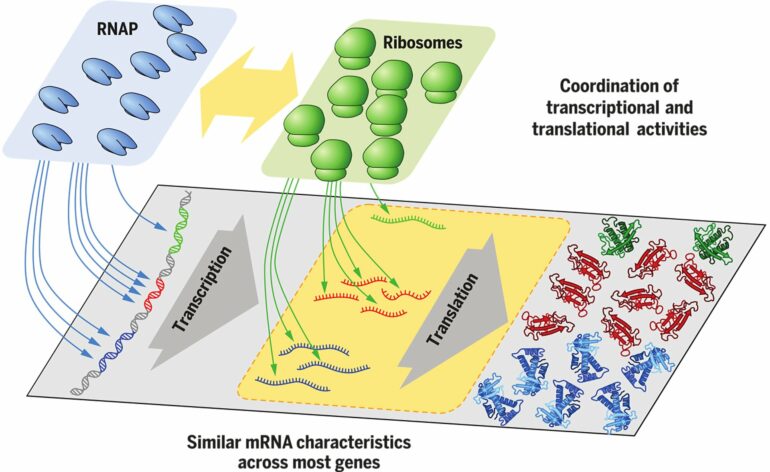 A fundamental principle of molecular biology governs how proteins are made within the cell, which happens in two stages called transcription and translation. During transcription, information stored in DNA is copied into messenger RNA (mRNA). Then during translation, the ribosomes assemble proteins one amino acid at a time based on the instruction specified on the mRNA.

The understanding of this process is so fundamental that the mere direction of the information flow from DNA to mRNA to protein is called the “central dogma” of molecular biology, a term coined by Nobel laureate Francis Crick. Since the advent of systems biology 20 years ago, researchers have been trying to establish how cells regulate transcription and translation processes based on gene expression data—which mRNAs and proteins are made under what conditions.

Deciphering how cells regulate these activities would provide insight into how they process environmental information to modulate their behavior. It would also allow scientists to formulate strategies for the precise manipulation of protein levels—a critical step in synthetic biology, which seeks to solve problems in medicine, manufacturing and agriculture through the redesign and re-engineering of genes and their interactions.

For the first time, researchers at the University of California San Diego have shown that changes in gene expression for the model bacterium E. coli happen almost entirely during the transcription stage while the cells are growing. The researchers have provided a simple quantitative formula linking regulatory control to mRNA and protein levels. The results and formula were published in a recent issue of Science.

“Ultimately what we provide is a quantitative relationship that scientists can use to interpret how pathogenic bacteria evade antibiotic treatment and host immunity,” stated Terry Hwa, UC San Diego Distinguished Professor of Physics and Biological Sciences, and principal investigator for the project. “In the synthetic biology context, it will allow bacteria to be redesigned and rewired for uses such as detecting and cleaning up toxic waste, or being sent into the body to kill cancer cells.”

The central dogma of molecular biology is linear, moving from DNA to mRNA to protein. It’s straightforward on an individual-gene level: turn on a gene, make mRNA, create proteins from the mRNA. Often, biologists think of gene regulation in such a linear fashion because they design experiments that change only a single gene or the few genes specific to their studies without drastically affecting the entire cell system.

According to this line of thinking, making twice as many mRNAs would yield twice as many proteins; however, when considered at a systems level, with all the genes together, this is not true, and the linear way of thinking about the central dogma doesn’t hold.

This is because cells must deal with certain global constraints. For example, the total protein concentration in a cell is approximately constant. When the environment changes and cells adapt by regulating the expression of certain genes, these global constraints force additional changes in the expression of not only these genes, but also others that are not directly regulated.

While systems biologists have not considered these global constraints when writing equations to model gene expression, Hwa’s group looked at the problem from the opposite end. They started with the constraints and then made quantitative statements with absolute measurements, beyond the relative measurements that are commonly used.

“We invested a lot of time and effort in quantifying these changes so we could filter out the small-magnitude changes that are really just distractions on a global level,” stated Hwa. “Absolute quantitative measurements will allow researchers to quantitatively relate mRNA levels to protein levels and vice versa. One cannot make these kinds of statements based on relative measurements.”

Hwa believes this research will reframe how gene expression and regulation is taught in biology textbooks and classrooms around the world, saying it already runs contrary to things he currently teaches in his own classroom.

Controlling gene expression is a complex process. A good design rule is essential so the same genetic circuit can work in multiple conditions. Currently scientists often see circuits they spent much effort developing in one environment fail in another.

Learning from the single cell: A new technique to unravel gene regulation

“We were using the wrong framework,” stated Hwa. “Now this work has provided a simple recipe that can be used to decipher gene-gene interactions in bacterial responses and can be used to design genetic circuits more effectively in synthetic biology, helping to solve some of the world’s pressing issues in biotech and health sciences.”