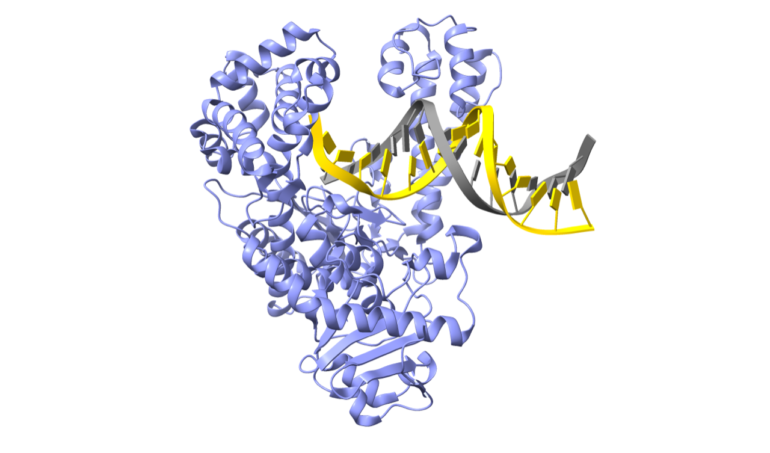 In a paper published today in Sciences Advances, researchers in the Department of Chemistry and the Department of Physics & Astronomy at the University of California, Irvine revealed new details about a key enzyme that makes DNA sequencing possible. The finding is a leap forward into the era of personalized medicine when doctors will be able to design treatments based on the genomes of individual patients.

“Enzymes make life possible by catalyzing chemical transformations that otherwise would just take too long for an organism,” said Greg Weiss, UCI professor of chemistry and a co-corresponding author of the new study. “One of the transformations we’re really interested in is essential for all life on the planet—it’s the process by which DNA is copied and repaired.”

The UCI-led team found that Taq, as it helps make new copies of DNA, behaves completely unlike what scientists previously thought. Instead of behaving like a well-oiled, efficient machine continuously churning out DNA copies, the enzyme, Weiss explained, acts like an indiscriminate shopper who cruises the aisles of a store, throwing everything they see into the shopping cart.

“Instead of carefully selecting each piece to add to the DNA chain, the enzyme grabs dozens of misfits for each piece added successfully,” said Weiss. “Like a shopper checking items off a shopping list, the enzyme tests each part against the DNA sequence it’s trying to replicate.”

It’s well-known that Taq rejects any wrong items that land into its proverbial shopping cart—that rejection is the key, after all, to successfully duplicating a DNA sequence. What’s surprising in the new work is just how frequently Taq rejects correct bases. “It’s the equivalent of a shopper grabbing half a dozen identical cans of tomatoes, putting them in the cart, and testing all of them when only one can is needed.”

The take-home message: Taq is much, much less efficient at doing its job than it could be.

The find is a leap toward revolutionizing medical care, explained Philip Collins, a professor in the UCI Department of Physics & Astronomy who’s a co-corresponding author of the new research. That’s because if scientists understand how Taq functions, then they can better understand just how accurate a person’s sequenced genome truly is.

“Scientists don’t know how these enzymes achieve their accuracy,” said Collins, whose lab created the nano-scale devices for studying Taq’s behavior. “How do you guarantee to a patient that you’ve accurately sequenced their DNA when it’s different from the accepted human genome? Does the patient really have a rare mutation,” asks Collins, “or did the enzyme simply make a mistake?”

“This work could be used to develop improved versions of Taq that waste less time while making copies of DNA,” Weiss said.

The impacts of the work don’t stop at medicine; every scientific field that relies on accurate DNA sequencing stands to benefit from a better understanding of how Taq works. In interpreting evolutionary histories using ancient DNA, for example, scientists rely on assumptions about how DNA changes over time, and those assumptions rely on accurate genetic sequencing.

“We’ve entered the century of genomic data,” said Collins. “At the beginning of the century we unraveled the human genome for the very first time, and we’re starting to understand organisms and species and human history with this newfound information from genomics, but that genomic information is only useful if it’s accurate.”