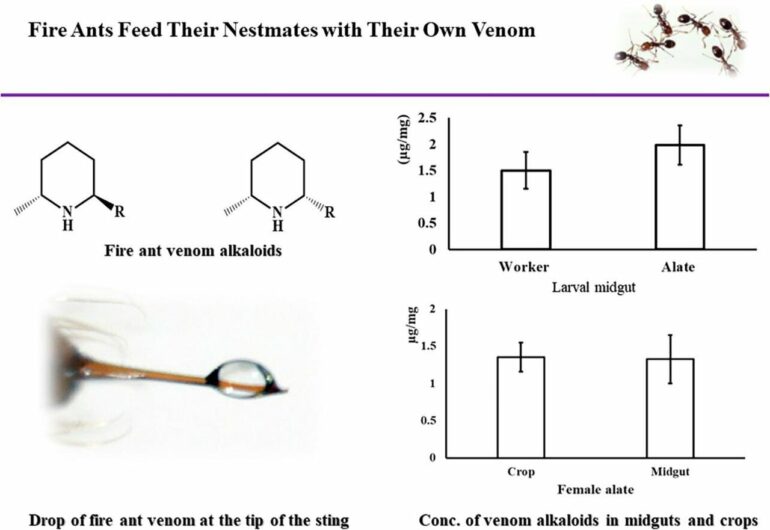 Venom is associated with being harmful, but red imported fire ants are using their venom for its medicinal benefits by sharing the toxic substance with their nestmates, according to a study published in the Journal of Insect Physiology.

Agricultural Research Service (ARS) scientists from the agency’s Biological Control of Pests Research Unit and Southern Insect Management Research Unit in Stoneville, Mississippi, discovered a new way that fire ants use their venom to prevent diseases in their colonies.

For fire ants, venom has different functions. Fire ants use venomous stings against intruders and immobilize their prey. Fire ants also take advantage of their venom’s antimicrobial properties in disease control by using it as an external surface disinfectant. Foraging ants come into contact with various pathogens in the environment. These pathogens threaten ants, especially when they share food with their nestmates.

“One way to reduce exposure to infection through food is to distribute antibiotics into the digestive system of all individual ants,” said Chen. “Venom is an internal antibiotic in fire ants’ digestive systems.”

To use venom as an internal antibiotic, fire ants share it by feeding the substance to their nestmates, including larvae and adults. In the study, researchers found nitrogenous organic compounds of venom, known as alkaloids, in crops and midguts of larvae. This finding indicates that trophallaxis, the transfer of food from mouth-to-mouth or mouth-to-anus feeding, must be involved in the transfer of venom since larvae do not produce alkaloids and depend on worker ants to be fed.

According to Chen, larvae serve as a “communal stomach” for the colony and are the most vulnerable to infection. To keep colonies alive, fire ants must protect the larvae.

Researchers also found that female alates (winged ants) shed their wings after a mating flight, burrow into the soil, and start new colonies. The new queen then provides venom alkaloids to her first batch of larvae in the colony. Then minim ant workers (the first batch of workers in a fire ant colony) emerge and then take over the role of providing venom to the larvae in the colony. The minim ant workers eventually die out, and the normal ant workers then become the colony’s venom donors. Thus, venom sharing occurs in every stage of colony development.

As a social insect, in addition to individual immunity, fire ants have evolved social immunity based on the interaction among nestmates. This study indicates that venom sharing by feeding may be an essential component of fire and social immunity. This research will help scientists better understand the ways ants work together to avoid epidemics.