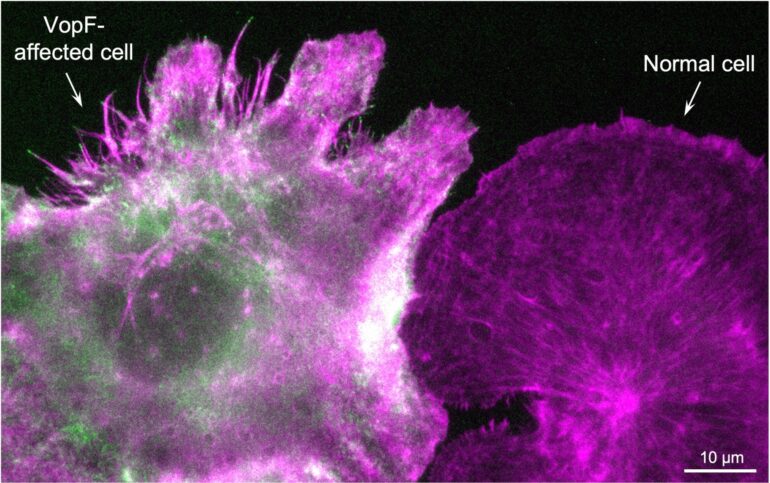 Toxins released by a type of bacteria that cause diarrheal disease hijack cell processes and force important proteins to assemble into “roads to nowhere,” redirecting the proteins away from other jobs that are key to proper cell function, a new study has found.

The affected proteins are known as actins, which are highly abundant and have multiple roles that include helping every cell unite its contents, maintain its shape, divide and migrate. Actins assemble into thread-like filaments to do certain work inside cells.

Researchers found that two toxins produced by the Vibrio genus of bacteria cause actins to start joining together into these filaments—which could be thought of as cellular highways on which cargo is delivered—at the wrong location inside cells, and headed in the wrong direction.

“Growing in the wrong direction is a totally new function that was not previously known and was not thought to be possible for actin filaments inside the cell,” said senior author Dmitri Kudryashov, associate professor of chemistry and biochemistry at The Ohio State University. “A large fraction of actin in the cell is consumed in formation of the ‘highways’ where they are not needed, so the cell resources are wasted and cannot be used to satisfy the cell’s basic needs.”

The research is published today (Nov. 18, 2022) in the journal Science Advances.

These disruptive toxins are called VopF and VopL, and are produced by two strains of Vibrio bacteria living in seawater: V. cholerae and V. parahaemolyticus, both of which can contaminate oysters and other shellfish that, when eaten raw, make people sick.

In this study, the research team zeroed in on describing the unexpected cellular activities rather than any further implications, such as how the hijacking relates to bacterial infection.

“We are looking at the interference at the molecular level—we have not focused here on how this cell function might affect humans,” said first and co-corresponding author Elena Kudryashova, a research scientist in chemistry and biochemistry at Ohio State.

“From a practical standpoint, this tells us more about these pathogens, and knowing your enemy helps you fight your enemy,” she said. “But finding something that we didn’t know was possible—for actin to behave in such a way inside the cell—raises new questions about whether this function might actually be needed, or could come about in some other way.”

Until now, actins have been known to assemble each filament in one way, originating from what is known as its pointed end and directed toward what is called the barbed end of the structure. Because they are limited in number, the actins disassemble as needed from the pointed end and are recycled to maintain directional activity toward the barbed end—and then these actin filaments perform functions, such as cell migration, contraction or division, as dictated by what the cell commands.

When the VopF and VopL toxins enter a cell, however, they attract actin molecules to start a new filament and cause the filaments to start assembling in this spot, which leads them to elongate in the direction of the pointed end—a reversal of their usual elongation direction.

“The toxins start making these actin filament highways in the wrong place, building something that is useless for the cell, and the cell doesn’t know how to deal with it,” Kudryashov said.

This actin interference was observed using imaging of live cells containing individual toxin molecules. Though they don’t yet know all the consequences of this hijacking activity, the researchers said the results could include seepage of nutrients through damaged intestinal walls—which would provide food for the infectious bacteria waiting outside.

And that’s why the scientists want to learn more—whether other molecules can force actins to assemble “roads to nowhere,” and whether that strange filament formation might even be a beneficial mechanism under a different set of circumstances.

“It’s quite possible that our own cells are doing this on some occasion, but we don’t know because actin has so many functions and not all of them are yet well understood,” Kudryashov said.