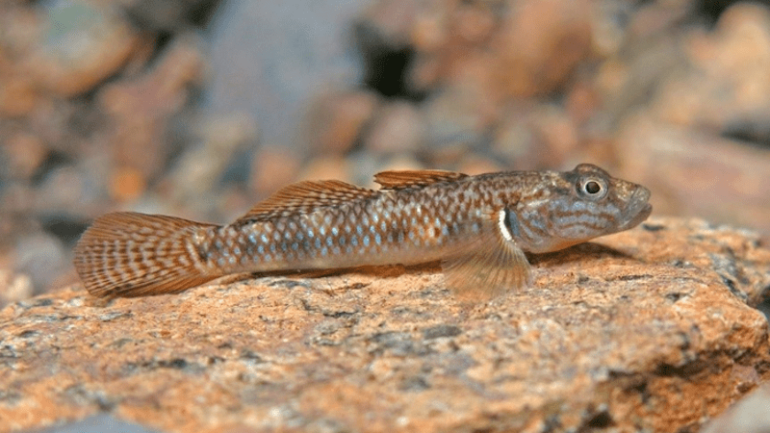 A team of biologists from the Okinawa Institute of Science and Technology Graduate University (OIST) in Japan and Western Philippines University (WPU) in the Philippines have found two new species of goby fish in Palawan, a Philippine archipelago. The goby fish, both belonging to the genus Rhinogobius, were described recently in the journal Zootaxa.

One of the species was given the Latin scientific name Rhinogobius estrellae, named for the waterfall Estrella Falls, in Barangay Estrella Village, where the goby was discovered.

The second species was named Rhinogobius tandikan, with the name inspired by the Palawan peacock-pheasant known locally as “Tandikan.”

“The Tandikan goby has these blue markings on its body, which reminded me of the spots in the Tandikan’s plumage,” said Dr. Ken Maeda, first author of the study and staff scientist in the Marine Eco-Evo-Devo Unit at OIST.

Rhinogobius estrellae and Rhinogobius tandikan are the third and fourth new goby species discovered in Palawan as part of a collaboration project between OIST and WPU, following Stiphodon palawanensis described in 2015, and Lentipes palawanirufus, described in a study last year.

The identification of Rhinogobius species in the tropical islands of Palawan shows that the range of this goby genus extends much further south than previously known.

“We were very surprised the first time we saw Rhinogobius estrallae, and then really excited when we found the second species,” said Dr. Maeda. “The Rhinogobius habitat is typically located in temperate and sub-tropical regions further north than Palawan, in places like Vietnam, China, Japan, and even the Russian Far East. Finding gobies from this genus in Palawan was very unexpected.”

The research team also analyzed DNA taken from the mitochondria for the two species, which placed both species in an ancient lineage within the Rhinogobius group. Previously, only one other goby, Rhinogobius similis, belonged to this evolutionary line. The three species also share similar physical characteristics unique to this lineage, including the arrangement of sensors on their head.

Unlike the Rhinogobius similis, which has a wide distrubution range, from Japan to Vietnam, the two new species appear to be endemic, meaning they are only found in one location, even within the island of Palawan itself.

In order to protect these two new species, the scientists urge that special attention must be given to preserve their habitats.

Nonlethal parasites reduce how much their wild hosts eat, leading to ecosystem effects

“Their endemic nature really raises the risk and threat level for both species,” explained Dr. Maeda. “Any disruption to their habitat, such as dams, roads, leisure facilities or development of the land for agriculture could quickly lead to their extinction.”