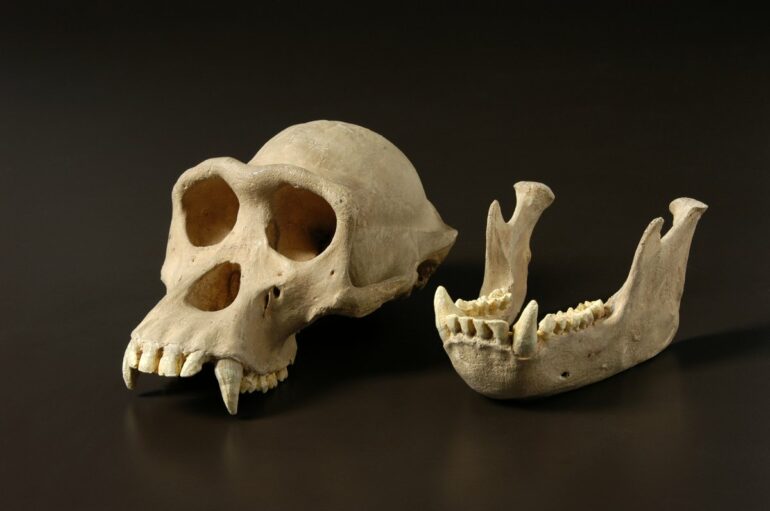 Teeth from an extinct monkey species are a clue to the ages of fossils of human ancestors throughout South Africa.

A study from UO anthropologist Stephen Frost and a team of colleagues updates the proposed ages of key fossil sites in South Africa, sites that hold important clues to human evolution. The results suggest that the oldest hominin fossils in South Africa are no more than 2.8 million years old. That number contradicts other recent studies that use different methods to propose dates as old as 4 million years ago.

Frost and his colleagues report the findings in a paper published Oct. 24 in Proceedings of the National Academy of Sciences. Frost collaborated closely with Chris Gilbert of Hunter College, as well as fellow UO anthropologist Frances White and graduate student Hailay Reda.

“The ages of these things do matter quite a lot,” Frost said.

Changing the age of a fossil also changes the context around it, and thus the explanations that scientists propose to weave disparate fossils into a cohesive evolutionary story. The ages of the South African fossil sites have been controversial for years, and paleoanthropologists have proposed a wide range of possible dates.

“South Africa was the first place where these really early human fossils were discovered,” Frost said. But because of how they were collected—sometimes dynamite was involved—”a lot of the evidence for how old these deposits are has been destroyed.”

To estimate dates across fossil sites, the team used the teeth of Theropithecus oswaldi, a species of monkey that went extinct about half a million years ago. Over time, the monkeys’ teeth have gotten consistently bigger, in a way that can be captured in a mathematical equation. So by looking at the size of the teeth found at a particular site, scientists can estimate when they and other nearby fossils formed.

T. oswaldi is a good candidate for this kind of comparative analysis, Frost said. Teeth from the species are abundant; they’re found at all of the key sites where hominin fossils have also been discovered. And they’re usually abundant, which reduces the risk that a few outliers will throw off the data.

In fact, more than 30 years ago scientists used fossil monkeys to estimate ages of fossil sites in South Africa. But with far more samples and better technology now at hand, Frost and his colleagues thought it was time to reevaluate.

“The techniques we’ve used have been around for a long time, and they’re proven to be very powerful,” Frost said. “Because of the limitations of the time, the estimates were broader 30 years ago.”

The researchers combined the monkey tooth data with other dating methods, like measuring magnetic signatures and radioactive isotopes in rocks.

A few recently published papers have used newer dating methods that suggest much older ages for some South African fossil beds. When that research came out this summer, Frost and his team had already been working on their reassessment of the same areas. And their method returned different results for certain key sites.

The date disparity affects the way scientists interpret fossils found at those sites. One particularly prominent example is Little Foot, one of the most complete early human skeletons ever unearthed.

Some studies have suggested that the fossil is as old as 3.67 million years old, but Frost’s data suggests it’s about a million years younger than that. (His team’s finding aligns with other estimates made using uranium-lead radiometric dating.)

The largest-ever flying animal behaved like a giant heron

Frost hopes that the results will spark further conversation and research into the ages of hominin fossils found in South Africa. Other researchers could do similar updates of age estimates made by cross-site comparison of other species.

“Ultimately, getting good age estimates for these South African sites has been a grail quest for 75 years or more,” Frost said. “I hope that other experts on different animal groups will do similar updates. This would be much stronger if it was across all of the fossils.”