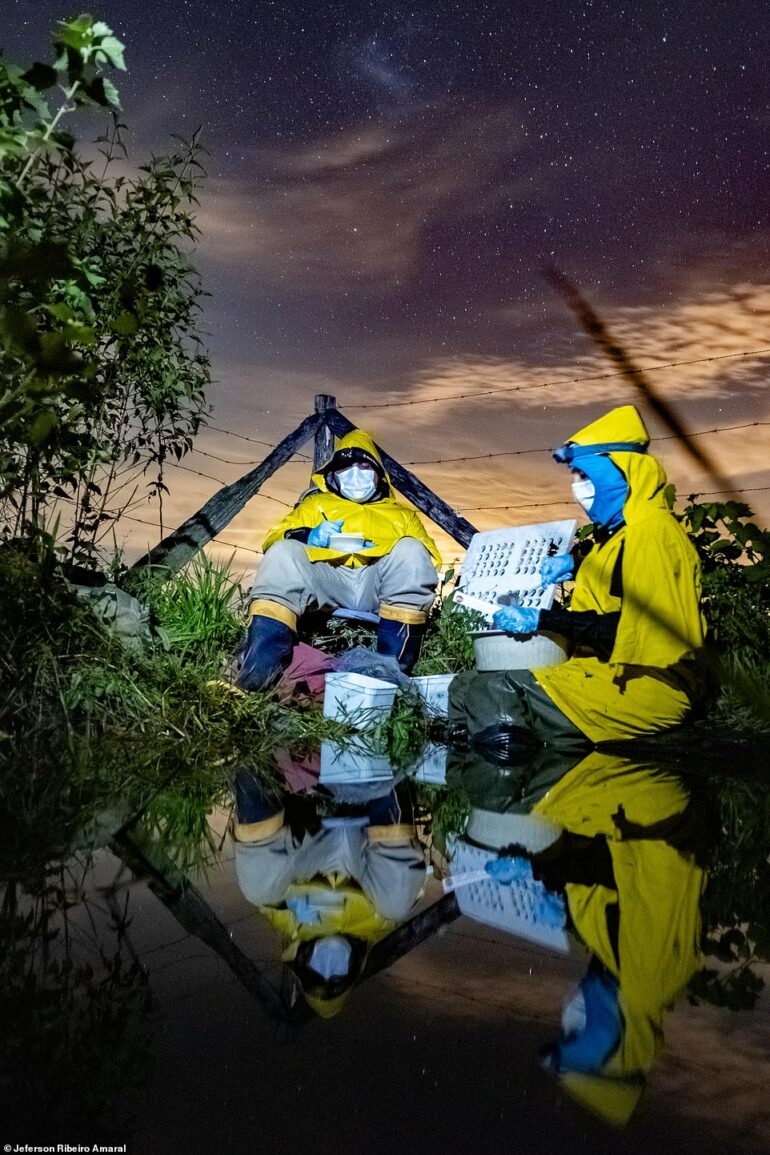 From parasitic mind control to feasting waxwings and bubble-breathing lizards, the second BMC Ecology and Evolution Image Competition has produced a spectacular collection of images that showcase the wonder of the natural world and emphasize the growing need to protect it from human activity. All images are open access and freely available for use under a Creative Commons Attribution 4.0 (CCBY) license.

The overall winning image depicts the fruiting bodies of a parasitic fungus erupting from the body of a fly in the Tambopata National Reserve, Peru and was taken by Roberto García-Roa from the University of Valencia, Spain.

Roberto García-Roa said, “The image depicts a conquest that has been shaped by thousands of years of evolution. The spores of the so-called ‘zombie’ fungus have infiltrated the exoskeleton and mind of the fly and compelled it to migrate to a location that is more favorable for the fungus’s growth. The fruiting bodies have then erupted from the fly’s body and will be jettisoned in order to infect more victims.”

Senior Editorial Board Member Christy Anna Hipsley recommended the entry, saying, “Roberto García-Roa’s striking image is like something out of science fiction. It illustrates both life and death simultaneously as the death of the fly gives life to the fungus.”

In addition to the winning image, the judges also selected winners and runner ups in four categories: Relationships in Nature, Biodiversity Under Threat, Life Close Up, and Research in Action, as well as three highly commended entries.

The winning images highlight the relationships between species, the minutiae of life on our planet and the challenges facing it, and the efforts of researchers seeking to understand and protect the natural world.

Alwin Hardenbol from the University of Eastern Finland, Finland took the winning image for the Relationships in Nature category. The photograph depicts a Bohemian Waxwing feasting on fermented rowan berries, demonstrating the strong relationship between the species. The presence of rowan berries influences the migration of waxwings, which can eat several hundred berries per day and have evolved larger livers in order to process ethanol produced by fermenting berries.

Senior Editorial Board Member Luke Jacobus said, “This image evokes an immediate response from the viewer by clearly communicating action, reaction and interaction. The contrasting colors and carefully crafted composition capture a fleeting moment in which the waxwing seems to respond to the viewer.”

Alexander T. Baugh, a behavioral biologist at Swarthmore College, U.S., captured the runner-up in the Relationships in Nature category, depicting a predator–prey relationship at the Smithsonian Tropical Research Institute in Panama.

Alexander says, “This image illustrates how natural and sexual selection can be at odds. A male tungara frog (Physalalamus pustulosus) makes a tasty meal for a hungry fringe-lipped bat (Trachops cirrhosis) that detected and localized the frog by listening to the mating call.”

These bats are specialized to hunt frogs, their hearing is adapted to their low frequency mating calls and their salivary glands may neutralize the toxins in the skin of poisonous prey.

The Biodiversity Under Threat category winner was captured by Samantha Kreling from the University of Washington, Washington, U.S., and shows African elephants sheltering from the Sun under a large baobab tree in Mapungubwe National Park, South Africa as droughts strike.

Samantha Kreling said, “Baobab trees can live for more than 2,000 years and store water in their barrel-like trunks when water is scarce. The tree in this image has had its bark stripped by elephants seeking water. Although these trees are usually fast-healing, this damage is more than baobab trees can cope with as temperatures rise due to climate change. This photograph highlights the need for action to prevent the permanent loss of these iconic trees.”

The Life Close Up category winner depicts gliding treefrog embryos developing within their eggs in the Osa Penninsula, Costa Rica and was taken by Brandon André Güell from Boston University, Massachusetts, U.S.

Brandon André Güell said, “The eggs in this image are among those laid by thousands of gliding treefrogs during an explosive breeding event triggered by a torrential rainstorm. If undisturbed, these eggs will hatch after six days of development, however the embryos can hatch early in order to escape threats such as predators and flooding.”

The Research in Action category winner was taken by Jeferson Ribeiro Amaral from Cornell University, New York, U.S. and features two researchers from the State University of Rio de Janeiro, Brazil. The image, taken during a storm in the midst of the COVID-19 pandemic, depicts researchers performing fieldwork to investigate whether isolated trees can help mitigate the impacts of human activity by increasing the abundance of frogs and improving the circulation of nutrients within ponds.

Jeferson Ribeiro Amaral said, “The researchers in this image are representative of so many others who carried on working throughout the COVID-19 pandemic. This image demonstrates their strength and dedication to understanding our world as they carry out their work despite thunderstorms and a global pandemic.”

Editor Jennifer Harman said, “Judging the many outstanding images submitted to this year’s competition was a wonderful and challenging experience. Our senior Editorial Board Members used their expertise to ensure the winning images were picked as much for the scientific stories behind them as for the technical quality and beauty of the images themselves. As such, the competition very much reflects BMC’s ethos of innovation, curiosity and integrity. We thank all those who took part in this year’s competition and we hope that our readers enjoy viewing these images and discovering the stories behind them.”