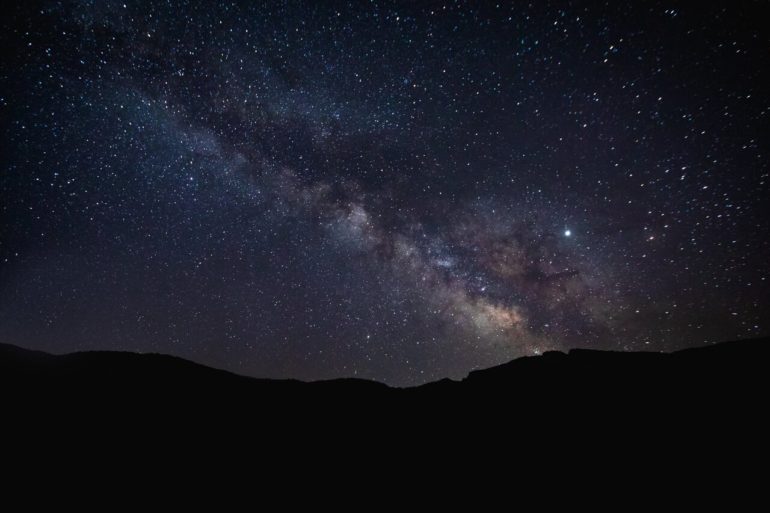 We are made of stardust, the saying goes, and a pair of studies including University of Michigan research finds that may be more true than we previously thought.

The first study, led by U-M researcher Jie (Jackie) Li and published in Science Advances, finds that most of the carbon on Earth was likely delivered from the interstellar medium, the material that exists in space between stars in a galaxy. This likely happened well after the protoplanetary disk, the cloud of dust and gas that circled our young sun and contained the building blocks of the planets, formed and warmed up.

Carbon was also likely sequestered into solids within one million years of the sun’s birth—which means that carbon, the backbone of life on earth, survived an interstellar journey to our planet.

Previously, researchers thought carbon in the Earth came from molecules that were initially present in nebular gas, which then accreted into a rocky planet when the gases were cool enough for the molecules to precipitate. Li and her team, which includes U-M astronomer Edwin Bergin, Geoffrey Blake of the California Institute of Technology, Fred Ciesla of the University of Chicago and Marc Hirschmann of the University of Minnesota, point out in this study that the gas molecules that carry carbon wouldn’t be available to build the Earth because once carbon vaporizes, it does not condense back into a solid.

“The condensation model has been widely used for decades. It assumes that during the formation of the sun, all of the planet’s elements got vaporized, and as the disk cooled, some of these gases condensed and supplied chemical ingredients to solid bodies. But that doesn’t work for carbon,” said Li, a professor in the U-M Department of Earth and Environmental Sciences.

Much of carbon was delivered to the disk in the form of organic molecules. However, when carbon is vaporized, it produces much more volatile species that require very low temperatures to form solids. More importantly, carbon does not condense back again into an organic form. Because of this, Li and her team inferred most of Earth’s carbon was likely inherited directly from the interstellar medium, avoiding vaporization entirely.

To better understand how Earth acquired its carbon, Li estimated the maximum amount of carbon Earth could contain. To do this, she compared how quickly a seismic wave travels through the core to the known sound velocities of the core. This told the researchers that carbon likely makes up less than half a percent of Earth’s mass. Understanding the upper bounds of how much carbon the Earth might contain tells the researchers information about when the carbon might have been delivered here.

“We asked a different question: We asked how much carbon could you stuff in the Earth’s core and still be consistent with all the constraints,” Bergin said, professor and chair of the U-M Department of Astronomy. “There’s uncertainty here. Let’s embrace the uncertainty to ask what are the true upper bounds for how much carbon is very deep in the Earth, and that will tell us the true landscape we’re within.”

A planet’s carbon must exist in the right proportion to support life as we know it. Too much carbon, and the Earth’s atmosphere would be like Venus, trapping heat from the sun and maintaining a temperature of about 880 degrees Fahrenheit. Too little carbon, and Earth would resemble Mars: an inhospitable place unable to support water-based life, with temperatures around minus 60.

In a second study by the same group of authors, but led by Hirschmann of the University of Minnesota, the researchers looked at how carbon is processed when the small precursors of planets, known as planetesimals, retain carbon during their early formation. By examining the metallic cores of these bodies, now preserved as iron meteorites, they found that during this key step of planetary origin, much of the carbon must be lost as the planetesimals melt, form cores and lose gas. This upends previous thinking, Hirschmann says.

“Most models have the carbon and other life-essential materials such as water and nitrogen going from the nebula into primitive rocky bodies, and these are then delivered to growing planets such as Earth or Mars,” said Hirschmann, professor of earth and environmental sciences. “But this skips a key step, in which the planetesimals lose much of their carbon before they accrete to the planets.”

Hirschmann’s study was recently published in Proceedings of the National Academy of Sciences.

Bergin says the two studies both describe two different aspects of carbon loss—and suggest that carbon loss appears to be a central aspect in constructing the Earth as a habitable planet.

“Answering whether or not Earth-like planets exist elsewhere can only be achieved by working at the intersection of disciplines like astronomy and geochemistry,” said Ciesla, a U. of C. professor of geophysical sciences. “While approaches and the specific questions that researchers work to answer differ across the fields, building a coherent story requires identifying topics of mutual interest and finding ways to bridge the intellectual gaps between them. Doing so is challenging, but the effort is both stimulating and rewarding.”

Presidents’ Day sales 2021: the date and what deals we expect to see

Blake, a co-author on both studies and a Caltech professor of cosmochemistry and planetary science, and of chemistry, says this kind of interdisciplinary work is critical.

“Over the history of our galaxy alone, rocky planets like the Earth or a bit larger have been assembled hundreds of millions of times around stars like the Sun,” he said. “Can we extend this work to examine carbon loss in planetary systems more broadly? Such research will take a diverse community of scholars.”