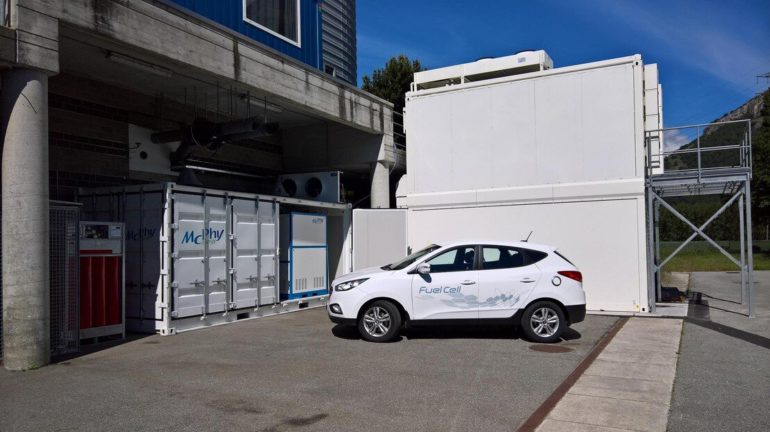 The need for reliable renewable energy is growing fast, as countries around the world—including Switzerland—step up their efforts to fight climate change, find alternatives to fossil fuels and reach the energy-transition targets set by their governments. But renewable energy can’t be incorporated into power grids efficiently until there is a way to store it on a large scale.

“Most forms of renewable energy are dependent on weather conditions, which results in large fluctuations in the power they supply,” says Danick Reynard, a Ph.D. student at EPFL’s Laboratory of Physical and Analytical Electrochemistry (LEPA). “But power grids aren’t designed to manage these kinds of fluctuations.” Hydrogen, because it can supply energy consistently regardless of the weather, is now attracting growing attention.

LEPA scientists have been working for several years on the dual challenges of clean hydrogen production and energy storage. They have just unveiled a new system that combines a conventional redox flow battery—currently one of the most promising methods for large-scale stationary energy storage—with catalytic reactors that produce clean hydrogen from the fluid running through the battery. The LEPA system is just as efficient as conventional ones but offers greater flexibility and energy storage capacity. It also produces clean hydrogen at a lower cost. The scientists’ research appears in Cell Reports Physical Science.

Redox flow batteries hold the most promise for energy storage

Redox flow batteries consist of two tanks separated by an electrochemical cell. Two highly conductive electrolyte fluids—one with a positive charge, one with a negative charge—circulate through the tanks and past the cell to trigger a chemical reaction where electrons are exchanged. These batteries store energy in electrochemical form, just like the lithium-ion batteries used in smartphones, but with a much longer lifetime and with flexible energy generation and storage capabilities, meaning they can respond quickly to fluctuations in power supply and demand.

To create their system, the LEPA scientists took a conventional redox flow battery and enhanced it by adding two catalytic reactors. These reactors produce hydrogen from the fluid circulating through the tanks. “The hydrogen is made through a catalytic process that uses energy from the battery to split water molecules into their two components, hydrogen and oxygen,” says Reynard. “But this hydrogen can be considered clean only if the energy used to charge the batteries is renewable.”

LEPA’s technology offers several advantages for both hydrogen production and energy storage. With conventional redox flow batteries, once they’re fully charged, they can’t store any more energy. “However, in our system, once the battery is fully charged, it can discharge fluid into the external reactors. They in turn generate hydrogen that can be stored and used later, freeing up storage space in the battery itself,” says Reynard.

The hydrogen produced by the LEPA system is pure and only needs to be dried and compressed for optimal storage. That system is also safer than conventional ones, because it generates the oxygen and hydrogen separately rather than simultaneously, so there is less risk of an explosion.

The future of charging stations for hydrogen vehicles?

LEPA’s technology could be particularly useful in transportation applications. As more and more drivers adopt electric vehicles, demand for electricity and clean hydrogen will soar. Charging these vehicles puts pressure on power grids and creates spikes in load that are difficult for grid operators to plan for. “According to 2020 data from the Swiss Federal Office of Energy, the transportation sector accounts for some 33% of the energy consumption in Switzerland,” says Reynard. “Our batteries, in addition to producing hydrogen, could also serve as buffers for smoothing out peaks in that demand.”