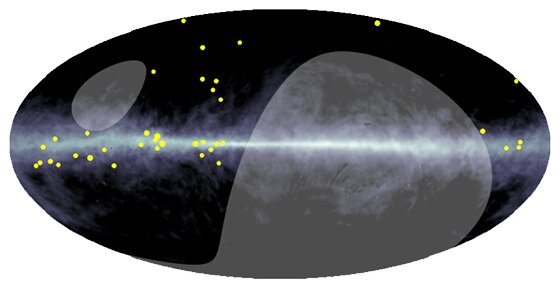 An enormous telescope complex in Tibet has captured the first evidence of ultrahigh-energy gamma rays spread across the Milky Way. The findings offer proof that undetected starry accelerators churn out cosmic rays, which have floated around our galaxy for millions of years. The research is to be published in the journal Physical Review Letters on Monday, April 5.

“We found 23 ultrahigh-energy cosmic gamma rays along the Milky Way,” said Kazumasa Kawata, a coauthor from the University of Tokyo. “The highest energy among them amounts to a world record: nearly one petaelectron volt.”

That’s three orders of magnitude greater than any known cosmic-ray-induced gamma ray—or any particle humans have accelerated in state-of-the-art laboratories on Earth.

Since 1990, dozens of researchers from China and Japan have hunted for the elusive high-energy cosmic gamma rays. The Tibet ASγ Collaboration made its discovery using nearly 70,000 square meters of ground arrays and underground muon detectors on the Tibetan Plateau, sitting more than 14,000 feet above sea level.

“Scientists believe high energy gamma rays can be produced by the nuclear interaction between high energy cosmic rays escaping from the most powerful galactic sources and interstellar gas in the Milky Way galaxy,” said Huang Jing, a coauthor from Institute of High Energy Physics, Chinese Academy of Sciences.

Chen Ding of the National Astronomical Observatories, Chinese Academy of Sciences, another coauthor, added, “The detection of diffuse gamma rays above 100 teraelectron volts is a key to understanding the origin of very-high-energy cosmic rays, which has been a mystery since their discovery in 1912.”

Balloon experiments first identified cosmic rays, revealing they were a key source of radiation on Earth. Cosmic rays are highly energetic particles, mostly protons, that travel across space. Millions of these particles pass through your body every day. (They are believed harmless.)

But where do cosmic rays come from?

“We live together with cosmic-ray muons, though we are usually not sensitive to them,” said Kawata. “Isn’t it a fantasy to think of where and how these cosmic rays are produced and accelerated, traveling all the way to Earth?”

A popular theory argues that accelerators known as “PeVatrons” spew cosmic rays at energies up to one petaelectron volt (PeV). Possible PeVatrons include supernova explosions, star-forming regions, and the supermassive black hole at the center of our galaxy.

So far, no one has detected any such accelerators. If PeVatrons exist, their cosmic rays should leave trails of glowing gamma rays strewn across the galaxy. The new study reports the first evidence of this highly-energetic haze.

“These gamma rays did not point back to the most powerful known high-energy gamma-ray sources, but spread out along the Milky Way,” said Masato Takita, a coauthor and colleague of Kawata. “Our discovery confirms evidence of the existence of PeVatrons.”

The researchers now want to determine if the probable PeVatrons are active or dead.

“From dead PeVatrons, which are extinct like dinosaurs, we can only see the footprint—the cosmic rays they produced over a few million years, spread over the galactic disk,” said Takita.

“But if we can locate real, active PeVatrons, we can study many more questions,” he said. “What type of star emits our sub-PeV gamma rays and related cosmic rays? How can a star accelerate cosmic rays up to PeV energies? How do the rays propagate inside our galactic disk?”

Other future directions include looking for PeVatron footprints in the southern hemisphere and confirming the gamma-ray results using neutrino detectors in Antarctica and beyond.

The research could also aid in the quest for dark matter. Underground detectors allowed the researchers to cut away cosmic-ray background noise, revealing the kind of pure, diffuse gamma rays predicted to emanate from dark matter.

“We can reduce the cosmic ray background by a factor of one million. Then we see a high-purity gamma ray sky,” said Takita.

“This pioneering work opens a new window for the exploration of the extreme universe,” said Huang. “The observational evidence marks an important milestone toward revealing cosmic ray origins, which have puzzled mankind for more than one century.”

The highest-energy gamma rays discovered by the Tibet ASgamma experiment