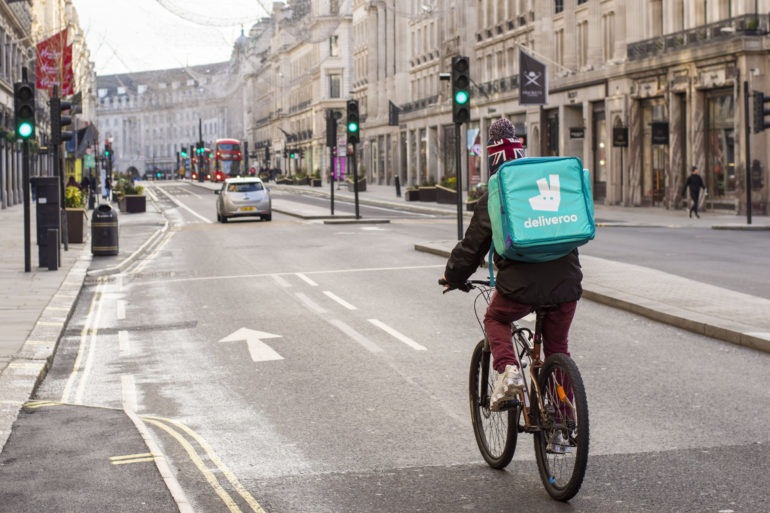 LONDON — Shares of Amazon-backed food delivery firm Deliveroo climbed by around 3% on Wednesday morning as retail investors started trading the company’s stock for the first time.

Some 70,000 Deliveroo customers purchased between £250 and £1,000 worth of Deliveroo shares at the £3.90 issue price before its initial listing last Wednesday. In total, Deliveroo sold £50 million worth of stock to retail investors through a platform called PrimaryBid.

However, due to conditional trading restrictions, these loyal customers were locked into their positions until Wednesday this week. As a result, they’ve had to sit back and watch Deliveroo’s share price crash by around 30%, with the biggest decline happening on the morning of the company’s market debut.

Some retail investors told CNBC last Thursday that they’d lost hundreds of pounds in the IPO and that they regretted their investments.

“I wish they had let the conditional week happen to settle the price and then placed our shares when we could actually trade them,” one investor told CNBC.

Another said they planned to keep their shares for now and hope they rise in price in a few months. “Not much you can do with them at this price,” they said.

Susannah Streeter, a senior investment and markets analyst at share trading platform Hargreaves Lansdown, said in a note on Wednesday that Deliveroo’s share price is being driven up by new retail investors.

“This will be some comfort for Deliveroo customers who were encouraged to buy a slice of the company but appeared to have thrown the dice on a disastrous debut,” she said. “Like a fateful round of Monopoly they were locked out of selling their shares for a week, while the company’s initial valuation fell sharply.”

“Now they finally have a ‘get out of jail’ card, but it seems for now that many have kept it in their back pocket, waiting it out for prices to stabilize,” added Streeter. “Total market trading volumes are pretty much unchanged from yesterday.”

Streeter noted that IPOs should “offer a much more level playing field from day one for all classes of investors.”

While the IPO helped Deliveroo raise $1.5 billion, it has gone down as one of the worst ever on the London Stock Exchange for a large company. At one point Deliveroo was aiming for an £8.8 billion market cap but the company is currently valued at just £5.2 billion.

What went wrong for Deliveroo?

In the days leading up to the IPO, several large investment firms said they had no plans to invest in Deliveroo. Legal and General, Aberdeen Standard, Aviva and M&G — which collectively have about £2.5 trillion in assets under management — all shunned Deliveroo’s debut.

They cited concerns around: the valuation; the employment status of Deliveroo’s 100,000 plus riders (several of whom are planning to strike in London on Wednesday); and the dual class share structure that gives CEO Will Shu more than 50% of the voting rights.

Early investors told CNBC that Deliveroo’s bankers got the pricing wrong on the IPO, with much of the blame going to Goldman Sachs. Goldman, for its part, has not accepted that it got anything wrong.

“Pricing an IPO is a really hard exercise,” Fred Destin, a venture capitalist who backed Deliveroo early on, told CNBC. “Bankers get accused of leaving money on the table if price is too low because there is a decent secondary portion usually.”

He added: “Bankers are trying to hit the right note between leaving upside for new investors and not leaving too much on the table for sellers. That’s what the book building exercise is for. It’s art more than science as the zeitgeist matters a lot, as we’ve just seen with ROO.”

“The offering, at £3.90 a share, gave Deliveroo a valuation of around £7.6 billion, sharply above its valuation of around £5 billion in January following an investment round, yet there had been no fundamental improvements to its prospects,” she said. “Instead the floatation came at a time of increasing concerns surrounding its gig economy model and the expectation that the easing of Covid restrictions could lead to an initial downturn in business.”

In a bid to prop up Deliveroo’s IPO, Goldman purchased £75 million worth of Deliveroo shares for itself, according to a report from The Financial Times on Tuesday, citing sources familiar with the matter.