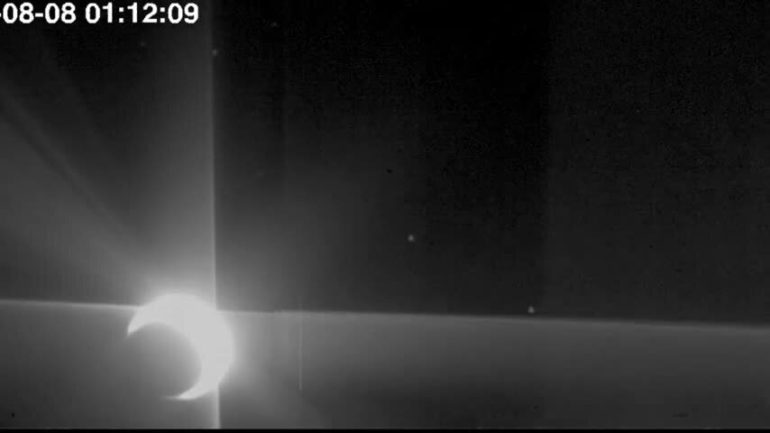 On Aug. 9, 2021, ESA/NASA’s Solar Orbiter spacecraft passed within 4,967 miles (7,995 kilometers) of the surface of planet Venus. In the days leading up to the approach, the Solar Orbiter Heliospheric Imager, or SoloHI, telescope captured this gleaming view of the planet.

The images show Venus approaching from the left while the Sun is off camera to the upper right. The planet’s nightside, the part hidden from the Sun, appears as a dark semicircle surrounded by a bright crescent of light – glare from Venus’ incredibly bright sunlit side.

“Ideally, we would have been able to resolve some features on the nightside of the planet, but there was just too much signal from the dayside.” said Phillip Hess, astrophysicist at the Naval Research Laboratory in Washington, D.C. “Only a sliver of the dayside appears in the images, but it reflects enough sunlight to cause the bright crescent and the diffracted rays that seem to come from the surface.”

Two bright stars are also visible in the background early in the sequence, before being eclipsed by the planet. The rightmost is Omicron Tauri, and above and to the left of it is Xi Tauri, which is actually a quadruple star system. Both are part of the Taurus constellation.

This was Solar Orbiter’s second Venus flyby, with an Earth flyby in November 2021 and six more Venus flybys planned from 2022 to 2030. The spacecraft uses Venus’ gravity to draw it closer to the Sun and tilt its orbit, swinging it up and out so as to “look down” on the Sun. From this vantage point, Solar Orbiter will eventually capture the first images of the Sun’s north and south poles.

On Aug. 10, just one day later, ESA and the Japan Aerospace Exploration Agency’s BepiColombo mission also flew by Venus. Learn more about the double flyby and see BepiColombo’s images in ESA’s coverage of the event.