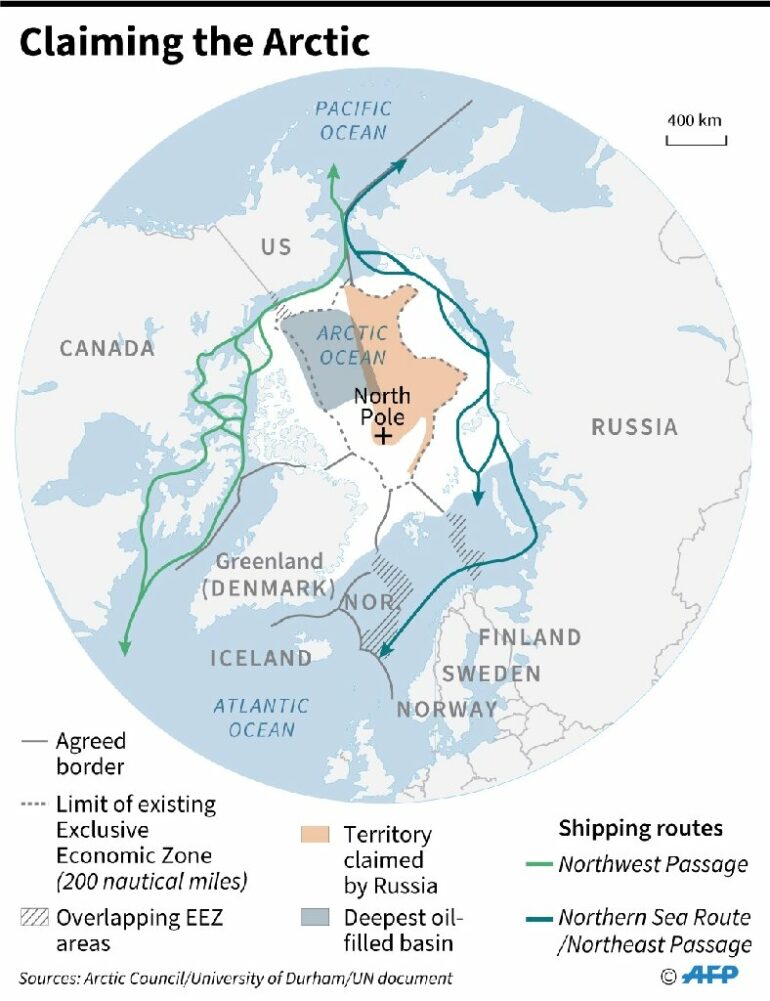 A new analysis of observed temperatures shows the Arctic is heating up more than four times faster than the rate of global warming. The trend has stepped upward steeply twice in the last 50 years, a finding missed by all but four of 39 climate models.

“Thirty years is considered the minimum to represent climate change,” said Petr Chylek, a physicist and climate researcher at Los Alamos National Laboratory and lead author of the study in Geophysical Research Letters. “We decreased the time interval to 21 years. At that smaller time scale, and contrary to previous investigations that found the Arctic amplification index increases in a smooth way, we observed two distinct steps, one in 1986 and a second one in 1999.”

Because the decade-by-decade episodic trend identified by Chylek and his collaborators affects global weather and sea levels, accurately projecting future climate change in smaller timeframes is essential for planning any mitigation of its impacts and developing adaptation strategies. The Arctic influences the world’s climate and weather, and the melting of the Greenland ice sheet causes sea-level rise that threatens many coastal communities.

The study calculated the Arctic amplification index to be greater than 4 within the early decades of the 21st century, four times faster than the global mean and considerably more rapid than previous published research had determined using 30- to 40-year time intervals. These earlier studies pegged the index between 2 and 3.

From 39 climate-change models in the widely used CMIP6 collection of the Coupled Model Intercomparison Project, the international research team found four that reproduced the first step reasonably well around 1986, but none that reproduced the second step in 1999. CMIP is an international collaborative of climate models using a shared set of parameters. CMIP6 has been used to create recent Intergovernmental Panel on Climate Change Assessment Report.

“We attributed the first step to increasing concentrations of carbon dioxide and other pollutants in the atmosphere, because several models do it correctly,” Chylek said, “but the second step we think is due to climate variability because none of the models can reproduce the second step.”

Short-term climate variability is typically undetected by climate models with their 30-year-plus-long timescales.

The study does not pinpoint a cause for these relatively sudden increases, but the authors speculate that contributing causes are probably sea ice and water vapor feedbacks combined with changes in how atmospheric and oceanic heat move into the Arctic. Future increases in the Arctic amplification index are likely to be smaller as the temperature difference between the Arctic and the tropics decreases.

Valuable for projecting change in the Arctic

Chylek said the research team next will study future Arctic climate projections using the four models that came closest to matching the observed warming trend, with the spikes.

“Because the four models correctly reproduce at least the first step, we assume they’re a little better for future climate projection,” Chylek said. “People usually average all models and assume the ensemble is more reliable than any single model. We show the average does not work in this case.”

The research team downloaded publicly available temperature data for the Arctic from the internet and used simulations output from climate models in the CMIP6 collection.

“People are not only interested in long-term climate change, but they are also interested in 10 years ahead, 20 years, 30 years. For decadal prediction, our observation that the amplification index changed in the past in steps is quite important,” Chylek said.