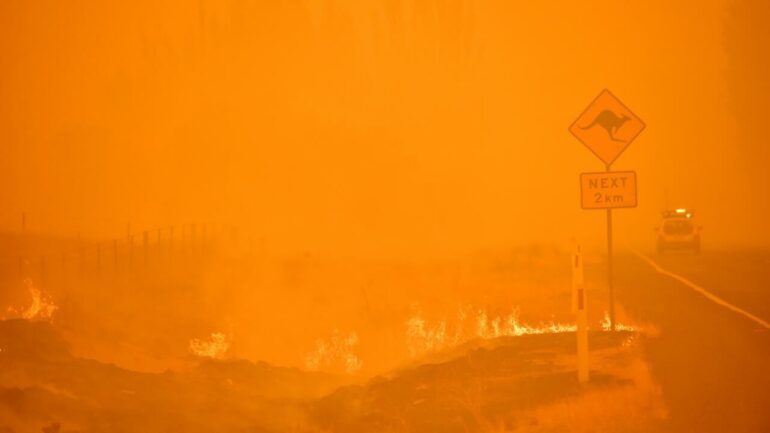 The report, which appeared in the Nature journal Scientific Reports, traced a link from the unprecedented smoke released by the fires to the ozone hole above Antarctica.

The fires, which burned through 5.8 million hectares of Australia’s east in late 2019 and early 2020, were so intense they caused dozens of smoke-infused pyrocumulonimbus clouds to form.

Pyrocumulonimbus clouds, referred to as the “fire-breathing dragon of clouds” by NASA, are so powerful they can affect the local weather, causing fire tornadoes and lightning storms.

During the “Black Summer”, these clouds shot more smoke high into the atmosphere than the previous record, set by the 2017 North American wildfires.

Around New Year 2019, uncontrolled fires along Australia’s east coast caused a pyrocumulonimbus event that stretched on for days.

The result was “millions of metric tons of smoke and associated gases being injected into the upper troposphere and lower stratosphere”, according to researchers from the University of Exeter and the University of Manchester.

A build-up of smoke particles, in turn, caused the lower stratosphere to warm to levels not seen since the eruption of Mount Pinatubo in 1991, they found.

Because of this stratospheric warming, the fires also prolonged the Antarctic ozone hole, which appears above Antarctica each spring and “reached record levels in observations in 2020”.

The hole was first created by human pollution—particularly the chlorofluorocarbons (CFCs) that were once emitted from many refrigerators—but in recent decades, global cooperation has given the ozone layer a chance to repair.

The Montreal Protocol, signed in 1987 and since ratified by 195 countries, sharply reduced the amount of CFCs in the atmosphere, and the ozone layer was expected to fully recover by 2060, according to United Nations modeling.

However, the researchers warn that because climate change will increase the frequency and intensity of bushfires, similar events—in which pyrocumulonimbus clouds shoot smoke high into the stratosphere—will become more likely.

Professor James Haywood told AFP that climate change could “absolutely” stymie the gains made by the Montreal Protocol.

“Our climate models suggest an increase in frequency and intensity of wildfires in the future under global warming. This may lead to more events like that in 2020, which could in turn lead to more ozone depletion,” he said.

“So the considerable efforts that we’ve put in protecting the ozone hole could be thwarted by global warming.”