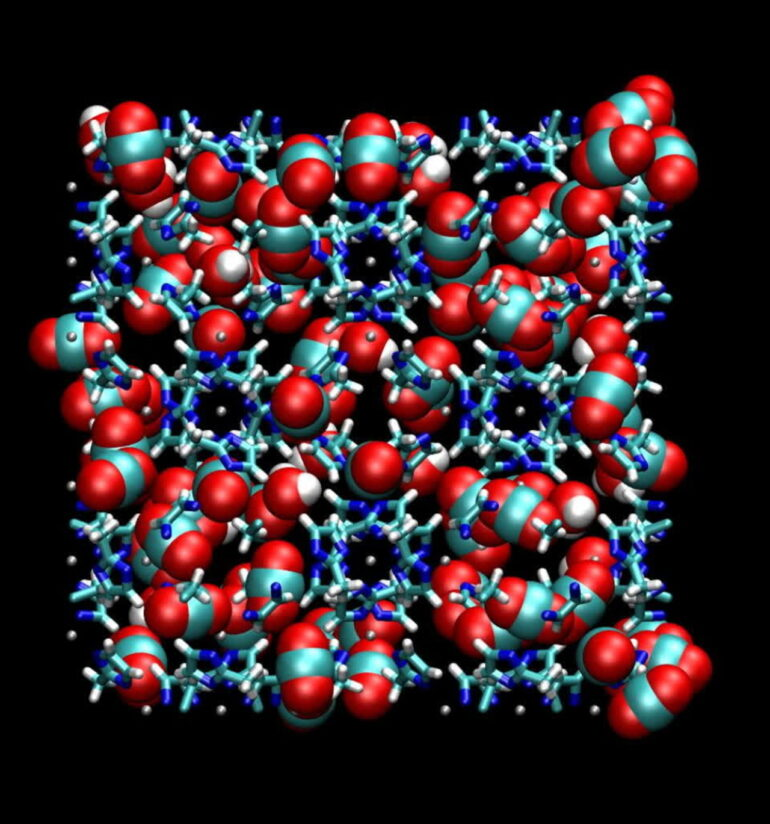 In an effort to reduce the risks from climate change, NIST scientists have set out to discover new materials that can draw planet-warming carbon dioxide (CO2) out of the atmosphere, a technique called “direct air capture.”

Direct air capture materials already exist, but they either cost too much money or consume too much energy to be deployed on a global scale. NIST scientists are using computer simulations to rapidly screen hypothetical materials that have never been synthesized but that might have just the right physical properties to make this technology scalable.

“The traditional way of screening materials is to synthesize them, then test them in the lab, but that is very slow going,” said NIST chemical engineer Vincent Shen. “Computer simulations speed up the discovery process immensely.”

Shen and his colleagues are also developing new computational methods that will accelerate the search even more.

“Our goal is to develop more efficient modeling methods that extract as much information out of a simulation as possible,” Shen said. “By sharing those methods, we hope to speed up the computational discovery process for all researchers who work in this field.”

Direct air capture is important because humanity has already profoundly altered Earth’s atmosphere—one third of all the CO2 in the air got there as a result of human activity. “Carbon capture is a way to reverse some of those emissions and help the economy become carbon neutral more quickly,” said NIST chemist Pamela Chu, who leads the agency’s recently launched carbon capture initiative.

Once CO2 is captured, it can be used to manufacture plastics and carbon fibers or combined with hydrogen to produce synthetic fuels. These uses require energy but can be carbon neutral if powered by renewables. Where renewable energy isn’t available, the CO2 can be injected into deep geological formations with the goal of keeping it trapped underground.

NIST scientists use computer simulations that calculate a potential capture material’s affinity for CO2 relative to other gases in the atmosphere. That allows them to predict how well the capture material will perform. The simulations also generate images that show how carbon capture works on a molecular scale.

Porous crystalline materials show particular promise for capturing CO2. These materials are made up of atoms arranged in a repeating three-dimensional pattern that leaves voids between them. In this conceptual illustration, the gray bars represent a crystalline material, and the red spheres are the voids.

Electrons are distributed unevenly within the crystal structure, creating an electric field that is attractive in some places and repulsive in others. The contours of that field depend on the types of atoms in the crystal and their geometrical arrangement. If all the forces line up just right, CO2 molecules will be drawn into the voids of the crystal by electrostatic attraction.

Porous crystalline materials can be synthesized with various types of atoms, and the atoms can be configured into many different geometries. The permutations are virtually endless. Computer simulations allow scientists to explore that vast universe of possibilities.

“We can imagine materials that have never existed and predict how they would perform,” said NIST chemical engineer Daniel Siderius.

The computer simulations combine the rules of physics with statistical methods to predict which direction CO2 molecules would move when they come into contact with a capture material—whether they would be drawn into the voids, diffuse out into the surrounding air, or just bounce around randomly in a state of equilibrium.

Most simulation methods predict the behavior of a system at a specified temperature, pressure and density. But modeling methods from NIST allow researchers to extrapolate that data to different conditions.

Currently, the best-performing process for industrial-scale carbon capture works by bubbling air through a chemical solution. But capturing the CO2 is only half the process. It then has to be removed from the solution so it can be stored and so the solution can be used again. This requires heating the solution to a high temperature, which takes a lot of energy.

The NIST researchers hope to find a material that will extract CO2 from the atmosphere at normal temperatures and pressures but release it in response to relatively small changes in heat or pressure. The ideal process will be low cost, both financially and energy-wise, and not produce toxic end products.

“We haven’t hit on the ideal materials yet,” Siderius said, speaking of the wider community of scientists who are working on this problem. “But there are a lot of potential materials out there, and new simulation methods can help us find them more quickly.”