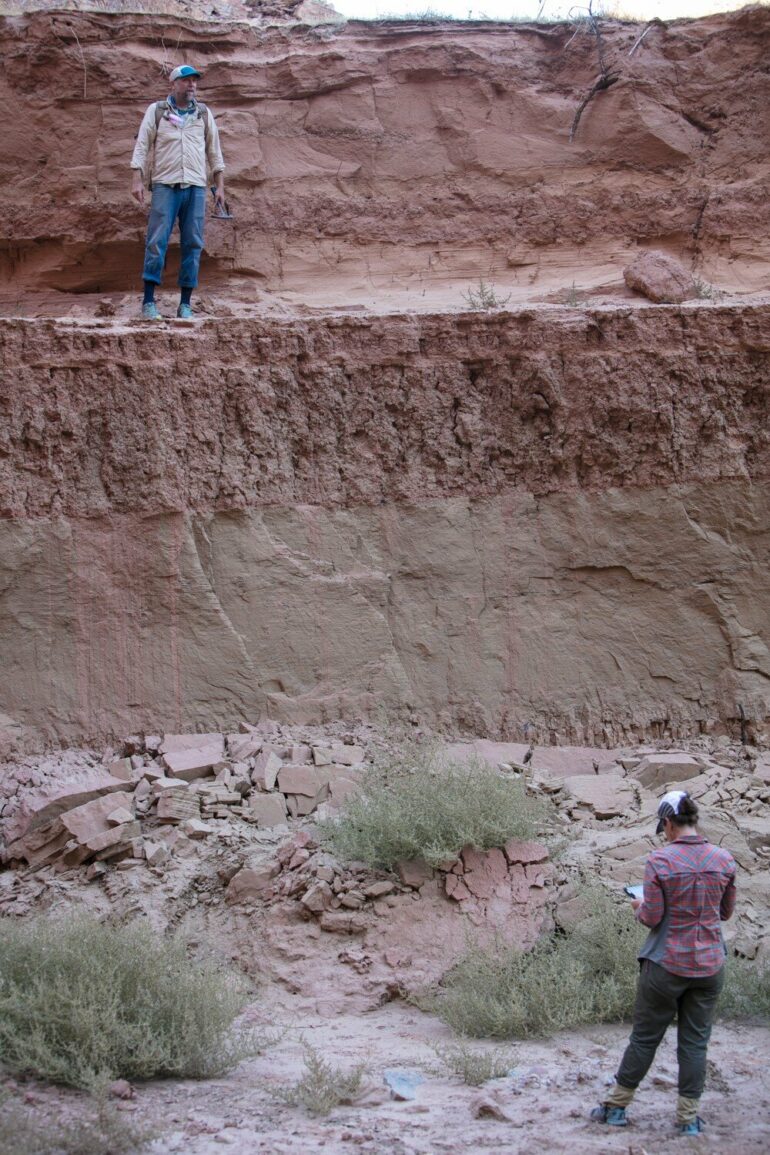 Usually when a geologist walks up to a sedimentary rock outcrop and starts scanning the layers of sand, mud and silt now turned to rock, they’re looking through millions of years of deep time to deduce what happened in that place in the world over many thousands of years to create that particular rock.

But when United States Geological Survey scientist Scott Hynek walked up to an outcrop of sediment in Calf Canyon, near Utah’s Lake Powell, he saw a thick layer of sand and thought “Crikey! That’s 1983!”

As drought forces Lake Powell to recede, the sediment that built up over the lake’s six-decade history is being revealed. Researchers are taking advantage of the relatively short, well-documented history of the sedimentary formations to learn more about how they came to be and how they might impact the future of the shrinking lake. Their study is published in The Sedimentary Record and was a collaborative effort between the USGS, University of Utah and Utah State University. This field-focused collaboration was made possible with the logistical support of the Returning Rapids Project, the University of Utah Global Change and Sustainability Center, American Rivers and the Glen Canyon Institute.

“We know that continued drawdown is going to expose a significant amount of sediment, and that sediment will be subject to remobilization,” says Cari Johnson, professor of geology and geophysics at the University of Utah, of the fine-grained, easily wind-blown sediments. “It’s likely going to want to redistribute itself. Where is it actually gonna go?”

The story of Lake Powell

Lake Powell came into existence with the completion of the Glen Canyon Dam in 1963. At its peak in 1983, the lake held nearly 26 million acre-feet of water (an acre-foot of water covers a football field to a depth of one foot).

But the reservoir, on the Colorado River, interrupts the natural flow of water and sediments downstream. Although U.S. Bureau of Reclamation Commissioner Floyd Dominy once declared that Lake Powell would not fill up with sediment, the decline of the lake level in recent decades has shown just how much sediment has accumulated in what was once the lake floor.

In Calf Canyon, where the researchers conducted their study of sedimentary formations, the sediments are 60 feet (18 m) tall. As a side canyon near the top of the lake’s elevation, Calf Canyon is only submerged when the lake is high and was among the first areas to dry out. A long-term decline in lake level that began in the year 2000 continues today, in the midst of a megadrought impacting the western United States.

For Johnson, USGS scientists Hynek and Casey Root, and Jack Schmidt of Utah State University, the exposed formations provide an incredible opportunity. Geoscientists are often using the textures and structures of sedimentary rocks to make inferences about what environments were like thousands or millions of years ago. Sandstone, for example, might suggest shallow water or a beach environment. Mudstones might suggest a deeper water environment. Layers of alternating sandstone and mudstone would suggest a shoreline that advanced and retreated rapidly and frequently.

“As geologists, we’re used to jumping into time machines when we look at rocks and stratigraphy,” Johnson says, “but our time machines are usually on the millions to maybe even billions of years range.”

So imagine the excitement of geologists who could study fresh sedimentary formations while almost within sight of the lake environment that created them.

“You can see the major forces that act on it, right there, in real-time,” Hynek says. “And you think to yourself, ‘Okay, all the ingredients are here. How did we make this pile of sediment?'”

“We know what the conditions were actually really well,” Johnson says. “So now we’re testing all of our conceptual models on how sedimentology and stratigraphy work, and we’re testing that against a known record. So I would classify it as both exciting and a little bit daunting because we don’t have as much wiggle as we normally do.”

“It’s knowing what the rivers were doing with monitoring data, what the reservoir was doing with spatial data, satellite data and topographic data. You have a good idea how the rivers and landscape have changed over the lifespan of Lake Powell.”

Studies of sediments deposited by manmade reservoirs are rare. So this study, despite all of the “knowns,” is among the first of its kind.

What the sediments show

Apart from some gravel at the bottom and at the top of the formation, most of the lake sediments in Calf Canyon are alternating layers of sand and clay.

“We think of these as couplets that are linked by seasonal depositional processes,” Johnson says. “Because we know the reservoir history so well in our minds, we’re picturing the lake level coming up and lake level going back down. Rivers go into flood stage and that dominates sediment deposition for a while, then other processes take over.”

Because Calf Canyon was only submerged during times when the lake was high, Root says, the range of hydrological events that could have produced the sedimentary record is even narrower. “Looking for floods, you can start to match up deposits and cycles to actual events that were recorded,” he says.

One of those events is the extraordinarily wet year of 1983 that caused flooding in Salt Lake City and marked the high-water mark of the Great Salt Lake. In the Lake Powell sediments, Hynek says, the 1983 floods are represented by a “brightly colored, soft sandy layer that’s a meter and a half tall, maybe, clinging to the side of a mud cliff with all this interesting sedimentary structure in it.” Strong runoff that year, the researchers hypothesize, could have pushed a large amount of sand up into Calf Canyon.

With changes in lake level, the sediments have been exposed, at least partially, in earlier years. And with that exposure have come tamarisk trees, which grow abundantly on the banks of streams and rivers in the desert Southwest. In some places, the researchers only saw the effects of the tamarisk roots—churning up the sediment, leaving behind chemical changes in the rocks—but in other places they saw roots still in place. Hynek recalls finding a tamarisk that continued growing despite being partially buried in sand. Study co-author Jack Schmidt of Utah State University pointed out the tenacious tamarisk, and explained the story it told.

“So the sediment was piling in on top of these plants,” Hynek says, “and they just keep growing as sediment piles on top of them. So in some cases you could almost follow a dead tamarisk down and see that it germinated or originated on a certain horizon.”

“With good preservation of those root systems and plant systems,” Johnson says, “we can actually treat them a bit like tree rings and look at their growth history to further solidify our interpretations of what the reservoir level is doing.”

Looking to the future

Cataloging Lake Powell sediments is not only an academic exercise. It is a look into the reservoir’s past that can inform how it might change into the future. The lake’s surface area has shrunk to a third of its maximum extent, for example, returning around 100,000 formerly lakebed-acres to terrestrial habitat.

As the sediment is exposed, there’s a good chance it will move again, redistributing through wind and water. USGS scientists are trying to learn more about the nutrients and metals present in the sediments to understand the potential consequences of their redistribution.

Also, the plight of the shrinking Lake Powell, Root says, can be an indicator for the rest of the Upper Colorado River Basin. “There are a lot of reasons to keep Lake Powell high,” he says, citing water storage and hydroelectric power generation. “So if it’s low, then it is a good sign that water availability is limited. The sediment in Calf Canyon is an example of what we can expect as reservoir levels go lower and more of these sediments are exposed.”